The platform is live at nearly 500 locations, with more to come.

Before the pandemic, catering was a “virtually negligent” part of Bloomin’ Brands’ business, CEO David Deno noted in February. What percentage of sales did it mix? “Tiny,” added CFO Chris Meyer.

However, during COVID it became one of the channels the Outback parent reexamined. Off-premises extensions, from app development to bundles to order-ahead adoption among guests, created a cross-channel world Bloomin’ felt it could dive into. Additionally, demand had begun to surge for larger orders in general. And people headed back to work.

Carrabba’s, for one, saw 46 percent growth in catering sales last year versus 2019. The brand’s carryout and delivery mix soared to 37 percent of sales. In that pool of transactions, Deno said last quarter, catering was “way up.” He added it had become a “big channel” for Carrabba’s and one Outback wanted to move “aggressively” on.

It took just two months so for Outback to do so. On Thursday, it launched the service nationwide. It’s now live at 481 locations, with plans to expand.

“We’re looking forward to sharing milestone moments with our guests at occasions like weddings, family gatherings, watch parties, and celebrations,” Brett Patterson, president of Outback, said in a statement. “We’re particularly excited to cater to employees as they return to the office because we know the power of sharing a great meal whether it be for recognition or a social gathering during a busy day.”

Outback is offering boxed lunches as a “mid-day must” for offices. The menu ranges from shareable to individual portions, “so meals are fit for any occasion and cooked to exact specifications,” the company said.

For parties of 10 or more, Outback has buffet-style options, including servings of steak and chicken to salads and dessert platters. Individual entrees require a minimum of 10 individual meals, with the ability to mix-and-match. So guests can order what they want and build a catering lineup.

Outback will offer catering for pickup before 4 p.m. seven days a week. Delivery orders can be placed 12 hours in advance as well. Customers order directly on the chain’s website. Check out the full options here. 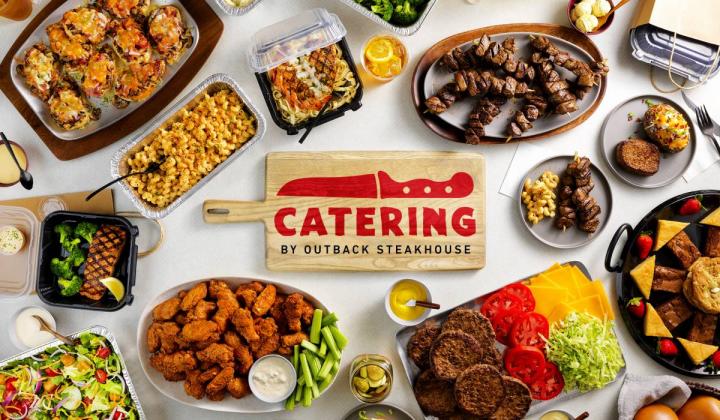 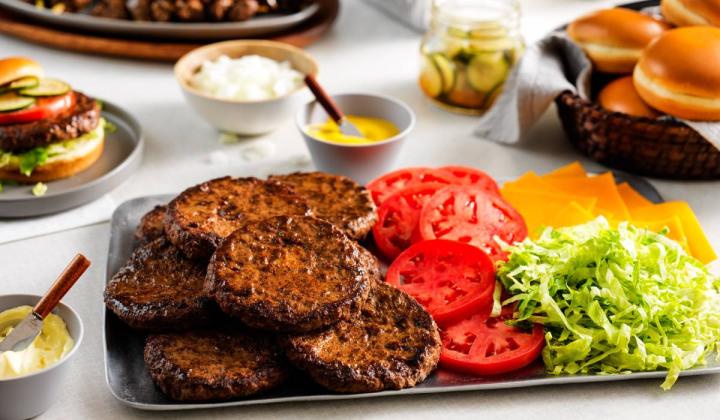 From small to large gatherings, Outback spotlighted customization in its catering offerings.

Catering represented one of the industry’s fastest-growing corners before COVID’s assault on social gatherings. It was a $60 billion market growing at 6 percent annually, 50 percent ahead of sector rates. Pre-COVID, 90 percent of restaurant leaders, as reported by ezCater, said catering was strategically important to their business and 91 percent of brands who were growing the channel year-over-year were actively investing in the program.

Bloomin’ is banking on its return alongside dine-in. Only now, there’s digital access to connect all of it.

U.S. business outside the four walls at Bloomin’ accounted for more than $1 billion in 2021, up 147 percent compared to 2019. Deno said in February carryout and delivery channels gained throughout the year, and profit margins are approaching that of in-restaurant transactions.

The company implemented a new online ordering system and mobile app and worked to bring as much native business to life as possible. The new app had more than 1.4 million downloads as of Q4. (More on the app and its features here).

Digital growth has allowed Bloomin’ to cut back on discounting and promotional LTOs, and move further away from mass marketing in favor of tailored communications—targeted, higher-ROI digital measures.

In addition to catering, Bloomin’ has a crop of innovations on deck for this year. It plans to spend $225 million–$240 million, driven by about 30 gross openings (half of which are international) and a $70 million investment for restaurant technology.

On the latter, Bloomin’ plans to roll new cooking technology, including advanced grills and ovens, as well as kitchen display systems for meal pacing, and handheld technology for servers.

The fresh tools will launch individually. The KDS is expected to expand first (within the year), and then the handhelds, depending on availability, should arrive in the coming four to six quarters. The grills and ovens, “over the next couple of years,” Deno said.