Deno labeled Tender Shack one of two fresh growth channels for Bloomin’ in a COVID-19 world, current and post.

The other is Aussie Grill, Outback’s spin-off fast casual originally created for international franchisees hoping to expand quicker with a smaller footprint. It debuted January 2019 in Saudi Arabia, where there are now two venues. There’s also one in Hong Kong.

Success overseas lured the counter-service model stateside (there are two shopping mall units). The first domestic Aussie Grill was actually meant as an incubator to test ideas for international menus. But its popularity got the U.S. expansion gears going. And COVID-19 lit the ignition.

Bloomin’ opened the first free-standing Aussie Grill in May, also in Tampa Bay, to up its domestic count to three. But notably, beyond serving steaks, burgers, chicken, ribs, and salad from a counter and 687-square-foot box, this one featured a drive thru.

“The financial returns from Aussie Grill are very promising in initial sales and profits are above expectations,” Deno said. “As a result, we are expanding the concept and plan to open more Aussie Grills in 2021.”

The same sentiment carries for Tender Shack, which leverages kitchens of existing restaurants for cooking and delivery. “Like Aussie Grill, consumer response has been strong and sales are ahead of expectations,” Deno echoed.

Performance drove Bloomin’s decision to carry Tender Shack outside of the Sunshine State, and see if it could deliver a promise not all that different from Aussie Grill—casual-dining quality at a fast-food price. “The chicken segment is a large and rapidly growing category. We have the assets and talent to take advantage of the significant opportunities,” Deno added. “It's clear the consumer wants great food in a convenient format. With Aussie Grill and Tender Shack, we believe, we have an opportunity to create an incremental growth channels that consumers will love, are perfect for today's environment, offers attractive economics, and will remain relevant as dining habits have changed.” 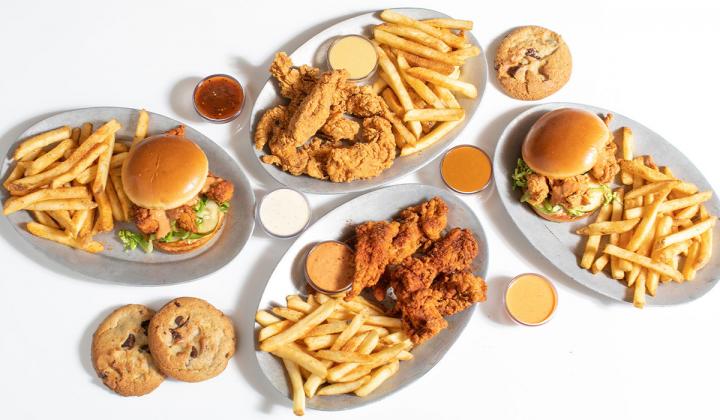 Tender Shack could grow to hundreds of locations within days, if Bloomin' chooses to do so.

Bloomin’ didn’t share projections or timelines for either, only to say Aussie Grill would start by strengthening its Florida pieline. There are teams dedicated to each and their development, Deno added, with “two terrific leaders.”

As is the case with all virtual concepts, Bloomin’ can really pull the trigger on Tender Shack’s expansion as it sees fit. Chili’s, for example, tested “It’s Just Wings,” for two months in seven Dallas stores. Yet when it decided to go big, the flip to 1,000-plus locations happened essentially overnight. And now it’s generating roughly $3 million per week in sales.

Bloomin’ closed Q3 with 1,460 total locations (708 for Outback in the U.S.). Deno's earlier statement would mean Tender Shack plans to spring out of Outbacks, Fleming's, and Bonefish Grill kitchens, in addition to Carrabba's.

The brand's customer, Deno said, is skewing younger than the rest of Bloomin's chains. They’re ordering in groups and solo. “… a large, attractive customer base and different types of occasions,” Deno said.

Tender Shack and Aussie Grill slot into the growth conversation of Bloomin’s pandemic response and future. It’s one element of how the multi-concept operator plans to climb out of the COVID trough and position for a future where additional share could be up for grabs amid industry closures.

And Bloomin’ has come a long way since March, nearly all of the way back for Outback and Carrabba’s. Same-store sales in Q3, which ended September 27, declined 12.8 percent across Bloomin’s lineup. Individually, Outback exited the period at nearly 90 percent of prior-year levels as comps declined 10.4 percent. Carrabba’s, lauded for off-premises gains by Deno on the call, recorded same-store sales of negative 9 percent. Bonefish declined 22.5 percent, while Fleming’s dropped 20.3 percent. The fine-dining concepts have lagged, understandably, throughout COVID due to their heavier dine-in reliance.

THE COVID-19 ROAD SO FAR FOR BLOOMIN' BRANDS

Could a Post-COVID Outback Be Even Stronger than Before?

The Recovery is in Full Swing at Bloomin’ Brands

Bloomin’ Brands Gets a Jolt of COVID-19 Recovery Hope

Bloomin’ posted a net loss of $17.6 million, or 20 cents per share, versus net income of $9.2 million in Q3 2019. The company’s revenue dipped 20.3 percent to $771.3 million. Both figures beat Wall Street estimates of $752 million and 32 cents per share, respectively. Bloomin’s shares have more than tripled off March lows.

Meanwhile, and critically, Bloomin’ retained about 50 percent of the incremental off-premises volume achieved when dining rooms shut down.

“As a result, U.S. comp sales outperformed the industry by over 850 basis points in the third quarter. Importantly, we continue to outperform the industry in the fourth quarter,” Deno said.

As of Thursday, 99 percent of the company’s corporate restaurant featured open dining rooms, up from 92 percent in July.

A key driver is Bloomin’s performance is simplification and a hastened move away from limited-time offer discounts.

Deno said Bloomin has become a “learner, faster-moving company.” While it might start with Tender Shack and Aussie Grill’s potential, Outback’s new menu might be the real short-term win.

The chain introduced a new permanent lineup in September designed to reinforce steak through more accessible premium cuts, larger portions, value and lower prices, and easier navigation. There are now “Steak ‘N Mate Combos” centered on customization with options for guests to upsize for as little as $2. Some favorites, like the Bloomin’ Onion dropped in price, as well—$2 in this case.

Deno said Outback’s reimagined menu is “performing even better than what we saw in test.”

Guests are trading up to better, larger cuts, he said, and appetizers attachment is on the rise. So is alcohol mix.

On top of the customer satisfaction scores, the efficient menu design reduced complexity for Outback, which has helped off-premises efforts. Execution and consistency is up, and food waste is down.

In Q3, food and beverage costs were 150 basis points favorable to last year due to “record low waste,” Meyer said. Kitchen prep hours are down. Reduced discounting is also showing up in higher overall check averages.

Kicking the “drug of discounting” is not a new journey for Bloomin’. But the reality is, it was hanging around. Currently, though, the only discounts in Bloomin’s offerings are those you see in its Dine Rewards loyalty program.

Addressing value was core to the menu change. And it’s only going to become more vital as COVID stretches and eventually clears. There’s no real telling where discretionary income will end up. “How did we do this and why are we so optimistic about everything? One, it addresses consumer need, the value equation, Outback food at a great price. That's No. 1,” Deno said.

The second point is Outback identified costs to take out of the business so it could provide flexibility and fund initiatives without relying solely on traffic.

With the combos in particular, Deno said, “Attachment rate of appetizers are going up. Beer liquor wine mix is going up. The number of steaks that are being ordered at the higher end of the menu is going up.”

“So when you combine the cost savings with the sales opportunity, with the simplification and what the customer gets out of this, we feel very good … about what that addresses from a value equation standpoint, we don't have to rely on discounting all the time, but also is good economically for us. That's the purpose of the menu,” he added.