Applebee’s comps sales improved 11 out of 13 weeks through the period ending June 28.

Out of Crisis Comes Opportunity for Applebee’s, IHOP

When the pandemic clears, the battle for market share will heat up.

From a net growth perspective, the casual-dining industry was on the retreat pre-pandemic. But that could change quickly.

Applebee’s president John Cywinski mentioned an intriguing dynamic during the company’s Q2 review July 29—a recap that tried to piece together three rather strange months.

Among the sectors in foodservice, casual dining remains the one category “absolutely disproportionately reliant upon independent restaurants,” he said. Or put another way, 90 percent-plus of all restaurants in casual dining are independents. “Which means,” Cywinski says, “strong, vibrant brands with scale who are well-positioned will benefit significantly.”

“It would be the one category that stands out in terms of opportunity.”

For perspective, before the virus, here’s a look at “major chains” market share among quick-service categories, according to BTIG analysts, The NPD Group, and company documents.

So, to Cywinski’s point, counter-service brands already dominated much of their category landscapes (outside of pizza, which is one reason brands like Papa John’s and Domino’s are so bullish).

Meanwhile, the pool stressed most by COVID-19 disruption, and where the lion’s share of closures will likely take shape, is the independent arena.

Dine Brands CEO Steve Joyce referred to the concept multiple times. “I think the discussion around scale and brand awareness, and the ability to do digital work and the technology we can bring, is just out of reach for most independents,” he said. “And that’s why you’re seeing them bear the brunt of this.”

Joyce admitted Dine Brands won't be entirely excused from closures. It simply doesn’t project a material number (more on this later). And then there are examples of corporate backing like when 49-unit IHOP franchisee CRFA declared bankruptcy in May. While that story made the rounds in the “industry is retracting” narrative, Joyce said, many people didn’t take the end-result into consideration. With Dine Brands’ help, 41 of those stores were dealt to another franchisee and are back on line.

A lot of numbers have floated in recent months concerning the breadth of the independent upheaval. Rabobank estimated as many as 50,000–60,000 closures within the next 12 months, or 15–20 percent of the entire field. The Independent Restaurant Coalition provided perhaps the direst outlook, saying 85 percent of all independents could shutter without direct aid. It’s likely to fall somewhere in the middle. But, regardless, it’s going to dramatically reshape the industry near- to mid-term given the fact the segment generates about $760 billion in sales and employs 11 million people.

This is where Dine Brands believes runway lies. “One person's crisis is another person's opportunity,” Joyce said. “And our view is we're going to emerge from this thing with a lot of strength and capital and that's going to put us in a position to resume a significant growth trajectory for the company.”

It brings up a seldom-mentioned backstory of COVID-19 survival tactics. Since the pandemic landed in March, large publicly traded restaurants companies have raised significant cash, either via new issuance and/or drawdown on existing credit lines. In a lot of cases, it’s come in far excess of the company’s cash needs, significantly depressed sales or not. Rabobank noted earlier that aggregator cash holdings by 25 of the largest public brands more than doubled, from $9.4 billion pre-virus to nearly $20 billion mid-May.

Dine Brands, for instance, currently has about $342 million of cash, of which $279 million is unrestricted.

It bears the question, can this recent cash build-up evolve from a defensive strategy intended to project balance-sheet strength into a more aggressive stance, especially as sales recover and a potential economic recession brings acquisition multiples down to attractive levels?

Dollars will be up for grabs as brands go after new customers. So will sites.

“Obviously, there is going to be a lot of buildings available for conversion,” Joyce said. “And you had several brands that pre-virus were struggling. … We're, obviously, looking at this all very carefully.”

“It’s a combination of efforts that we think is mostly upside for us,” he added. “And we think at the far end of this episode, I think what you're going to see is the companies that emerge with strong financial capabilities are going to be in a really good position for growth and that's the way that we're viewing it.”

Applebee’s permanently shuttered 24 domestic franchises in the three months that ended June 30 (two international as well), and has closed 38 total units (six international) in the six months leading up to July. It finished Q2 with 1,633 domestic stores and 116 international. This time last year, Applebee’s had 1,676 and 139 restaurants, respectively.

IHOP closed 18 franchise/area license restaurants and has shuttered 28 trailing six months. With growth, the net reduction is 17 and 18 units, respectively. IHOP exited the period with 1,696 domestic venues and 127 international compared to 1,705 and 123 in the year-ago period. 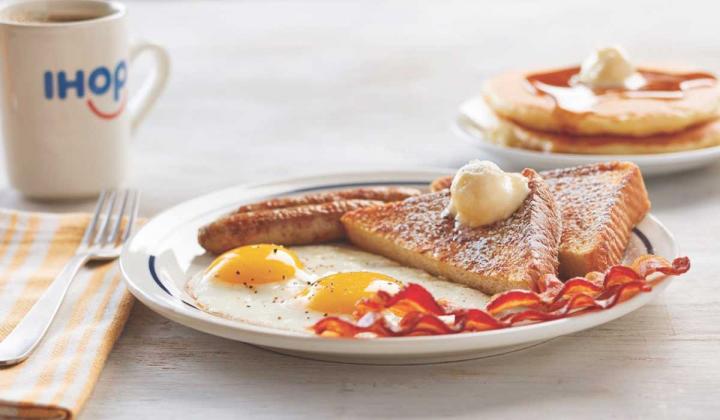 Breakfast occasions during COVID-19 have been tough to chase for brands nationwide, including IHOP.

Dine Brands reported a net loss of $134.8 million ($8.04 per share) in Q2 compared to net income of $21.4 million in Q2 2019. The company surely isn’t alone in unicorn results, which Joyce said are an undeniable outlier in his 40 years of restaurant experience.

Applebee’s and IHOP did how progress throughout the quarter and in more recent weeks.

Applebee’s comps sales improved 11 out of 13 weeks through the period ending June 28. It marked a massive uptick from a decrease of 77 percent to 17.8 percent, or 59.2 percentage points. IHOP’s same-store sales bumped sequentially for 12 out of 13, from negative 81.5 percent to 34.4 percent—a lift of 47.1 points.

There have been some dramatic shifts along the way. Applebee’s off-premises sales accounted for 60.5 percent of sales mix in Q2. It was just 16.8 percent in Q1 and 13 percent the quarter before that. Delivery pushed 16.8 percent of total sales and take-out 43.8 percent. In the off-premises mix itself, Carside To-Go was 68 percent and delivery 32 percent.

Applebee’s online sales as a percentage of total take increased by 17.8 percentage points in Q2 to 22.9 percent. That compared to 5.1 percent in the first quarter of the year.

And as of June 30, 3,154 of Dine Brand’s domestic locations (95 percent) were open for either dine-in service or off-premises. It started the quarter at 82 percent.

CFO Tom Song said reopening with enhanced sanitation standards has run each restaurant about $3,000. The ongoing costs add up to $1,000 per week.

Focusing on Applebee’s, the brand headed into the pandemic riding 10 consecutive weeks of positive sales, including a 3.2 percent comp sales increase through March 8. At the onset, it closed 250 restaurants and pivoted to off-premises, which triggered the 70 percent-plus drop in April.

In addition to losing its dine-in business (85 percent of sales pre-virus), Cywinski said Applebee’s took a self-imposed hit by discontinuing national marketing on March 18. It went on a media hiatus across almost all of Q2 so it could replenish its ad fund and wait “for the right time to reintroduce Applebee’s to America,” he said.

Today, 1,600, or 97 percent, of Applebee’s are open. The remaining 65 are a combination of temporary and permanent closures, Cywinski said.

Of those 1,600, roughly 1,450 are fully operational with open dining rooms. Applebee’s returned to national marketing in response, launching a fresh plan in mid-June that broadened in early July. It focuses on dining room reopenings and off-premises messaging, as seen below.

Average weekly sales have improved to about $39,000, with 64 percent coming from dine-in business.

Cywinski said Applebee’s appears to be holding most of its off-premises business upon reopening. There’s been a 15–20 percent cannibalization rate.

Like its sister brand, IHOP discontinued marketing. But it did so late in Q2 and did not use national media through the first three weeks of July, outside of some basic local marketing and a brief off-premises push, brand president Jay Johns said. It started a new national campaign on July 22.

IHOP has faced a more challenging road due to its daypart focus. While the company’s overall sales improvement from April to June was fairly even across all segments, breakfast lagged behind lunch and dinner by about 200 basis points, Johns said. Per NPD, it’s the daypart facing the steepest transaction declines as work routines are disrupted.

IHOP was able to offset some of the loss by lifting off-premises comp sales 145 percent in Q2, primarily driven by traffic.

As of June 30, 92 percent of IHOP’s domestic system was open, of which 88 percent had in-restaurant dining. By July 27, 1,565 U.S. units (92 percent) were open for dine-in or off-premises business. The in-restaurant number has fallen back to 1,320 thanks mainly to California’s decision to suspend indoor dining.

But like Joyce’s sentiments, Johns believes IHOP can surge on the other side. “Undoubtedly, the coronavirus is having a profound impact on our industry,” Johns said. “As a result, a significant number of independent restaurants are not expected to survive as Steve mentioned earlier. This scenario actually provides an opportunity for IHOP to increase its market share as some independents close their doors permanently and IHOP continues to grow through traditional and nontraditional development.”

IHOP franchisees opened 13 restaurants in the first half of the year.