Deals are getting more intense, but there's a long-term game to play.

Olive Garden remains even-keeled, despite the reactionary, moment-by-moment culture that often defines the restaurant world. Being a cog—albeit the biggest—in Darden’s eight-concept machine helps. It keeps the panic button well under the desk.

That’s pretty much what happened this past quarter as the classic brand reported its lowest comparable sales result in nearly three years.

So what slowed the performance? Darden chief executive officer Gene Lee admitted a rare promotion misstep during the company’s quarterly review—one that created a difficult ramp to start the period. The company’s create-your-own “Lasagna Mia,” deal, which started at $12.99 and allowed customers to add toppings and sauce to Olive Garden’s Four-Cheese Lasagna Rollata base, was pulled after three weeks. Darden tried Lasagna Mia briefly in the summer of 2018 in the form of a standard cubic lasagna serving. This time, it was a pinwheel design that looked, according to some on social media, like “pasta pancakes,” with sauce running down the side instead of maple syrup.

Beyond the offer falling flatter than hoped, it also comped against Olive Garden’s always-quick moving Buy One Take One deal for the first four weeks of Q2. As a result, the chain pulled off the promotional advertising to support Lasagna Mia, CFO Rick Cardenas said. It diverted spend to its $5 Take-Home offer instead.

“Not everything that we're going to do is going to work but … we recognized that something wasn't right with it and we didn't put the promotional dollars behind it, and we pivoted,” Cardenas said. “And I think that put us in a hole in the quarter and we decided to let it play out.”

That last part of Cardenas’ comment has become a staple of Olive Garden’s personality during its 21-quarter streak. In this case, it leaned on LongHorn’s surge to soften the blow and keep the brand from overreacting, perhaps with a deep discount.

The 518-unit steakhouse spiked same-store sales 6.7 percent in Q2 versus a year-ago gain of 2.9 percent. LongHorn has now reported positive performance in 27 straight periods, besting Q2 industry marks by 640 and 550 basis points (comps and traffic). Traffic was up an impressive 3.2 percent, with pricing and menu mix lifting 1.9 and 1.6 percent, respectively.

INSIDE THE STEAK-FUELED EVOLUTION OF LONGHORN

WHY DARDEN IS THRIVING IN THE 'WAR FOR TALENT'

Returning to Olive Garden, Lasagna Mia’s challenges forced the chain to make up some ground from negative sales at the beginning of the period, Lee said. Sales trends improved as it moved into its Never Ending Pasta Bowl.

These menu changes triggered a series of questions about Olive Garden’s value proposition during the call. The chain chose not to push extra deals to make up for the slow start, which is counter intuitive to a lot of brands in the marketplace. Lee said that’s “the beauty of the portfolio” in reference to how strongly LongHorn performed. And Darden actually spent less money in advertising in Q2 than it did this time a year ago.

Overall, it’s reflective of how Olive Garden, and Darden in general, has operated amid a resurgent value landscape in casual dining: pull back and say, “what’s going on in the business?” And is it necessary to react? Lee didn’t believe so.

MKM Partners wrote in a recent note that it expects Darden “to remain measured in its value approach, but believe there is the potential to step up its promotional and incentive-laden offers as needed to protect traffic within the segments of its consumer base that are value focused.”

Added a SunTrust Robinson Humphrey analyst: “While we do not expect a ‘value war’ due to a relatively strong consumer and operating cost inflation, we do expect larger chains with scale to gain share with an increased value focus.”

Lee said the casual industry lately has witnessed a shift in value. There is more pressure today on promotional constructs that have now become permanent parts of the menu. Think Chili’s 3 for $10 and Cracker Barrel’s “Daily Delights.”

Yet if you look at industry data, from Knapp-Track and TDn2K, check average continues to grow north of 2.5 percent. Essentially, there’s proof to back the notion guests are willing to pay more for brands that execute. However, there are nuances to this debate that can’t be measured so cut and dry by price points. 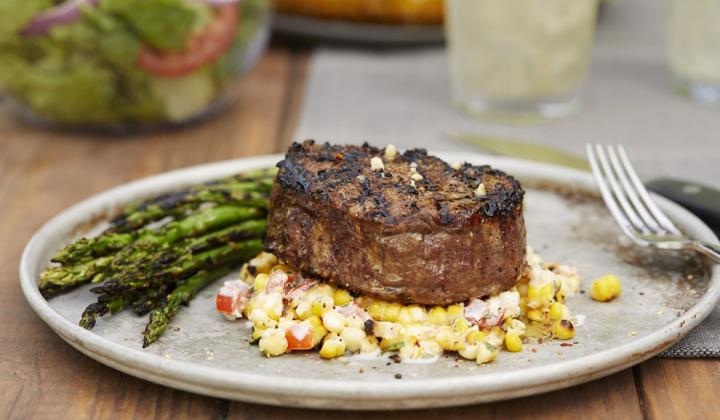 LongHorn's success gave Olive Garden some ground to work with.

For Olive Garden, Lee said, it boils down to multi-purpose value and making sure it stretches across the platform. “So, some value in price, some value in portion, as we try to attract and talk to each and all the different constituents we have for consumers,” he said.

What does this look like? And how does it show up in a demographic shift? Are some consumers less sensitive to value? Is there a base that needs it? These are questions Darden is trying to answer, Lee said. And the solution is broad.

A portion of Olive Garden’s consumers, naturally, measure value by what they pay from a dollar standpoint and are looking for that means to entry. Others weigh portion size over price.

“We know that there is a guest base inside of Olive Garden that price plays a very important part of their decision making, and we have to have an offer out there, a lot of the time, so that they will come to us. If they don't have an offer they will go someplace else. We know that through our token analysis,” Lee said.

There are also customers, though, who responded favorably when Olive Garden increased the portion size of chicken in its Alfredo dish. Value scores went way up, Lee says.

Basically, there has to be a value deal to get certain customers through the door. But ending there is a risky game to play with so many options in the marketplace, especially at the counter-service level.

The prime demographic at Olive Garden is 35–55. That’s good news for the brand, Lee said, because it’s a spending-friendly segment starting to mature with plenty of room ahead. In terms of millennials in particular—a group on the cusp of entering this window and staying there for a while—Lee said the guest segment shouldn’t be overgeneralized. They like choice, which is why Olive Garden’s customizable Cucina Mia platform has done so well. Yet they’re not all dollar-value hungry as some might assume. That changes as millennials transition into the next phase of their lives. Into the family category, for example.

“This is a very millennial friendly brand. It is a very social brand, and I would tell you that millennials love the value of Olive Garden because they can stretch their dollars,” Lee said.

That simply doesn’t always mean spending as little money as possible. Yet Olive Garden still needs offers to get value seekers through the door, whether they ladder up to more premium items or not.

Some current setups include the Early Dinner Duos for $8.99, continued everyday meal and drink specials, like 5 Drinks for $5, $7.99 lunch, and the aforementioned $5 Take-Home Entrees, where customers can tack on a classic to their meal at the end. Additionally, Olive Garden is currently running an Oven Baked Pastas LTO for $10.99, with options like Asiago Tortelloni Alfredo with Grilled Chicken.

Where the Olive Garden customer is getting their food is changing, too. The brand grew off-premises sales 17 percent, year-over-year, in Q2 driven by strong preference for the $5 Take-Home offer. The segment represented 17 percent of total sales in the quarter. The digital slice grew about 33 percent and mixed 38 percent of total to-go business.

Olive Garden remains emphatic in its resistance to third-party delivery, electing instead to focus on improving convenience and accuracy for take-out and catering. “We're investing capital dollars into our restaurants to ensure that we have the space and the right equipment to handle the additional demand,” Lee said. “And that will be a big effort over the next 12 to 18 months. And we think that we can take a little more friction out for the consumer.” 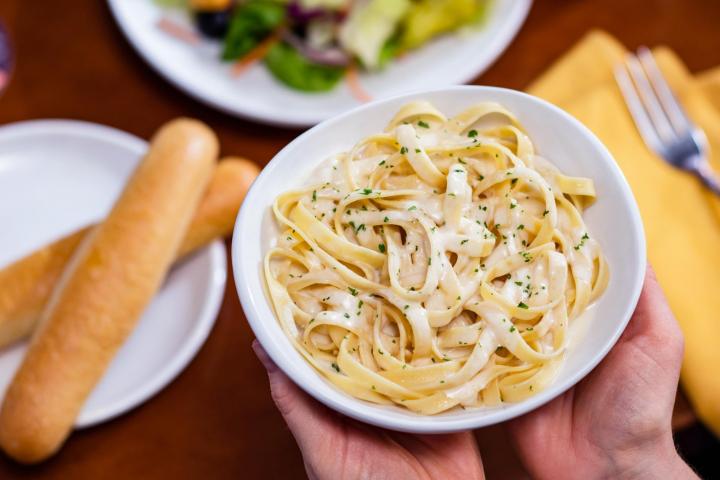 Olive Garden does promote what it calls “last-mile delivery,” which allows it to control the experience. Customers can access the option if they spend $75 or more and call before 5 p.m. Olive Garden will deliver the order in that scenario. Lee said it’s a big and growing business for the brand, with average checks in the $300 range. “That’s business really worth chasing and doing,” he says.

The rest of Darden’s portfolio