Same-store sales have risen 8 points to begin the new year.

The past four months have been quite the seesaw for BJ’s Restaurants.

The 210-unit chain began its Q4 in October with a same-store sales decline of 20.6 percent and average weekly sales per restaurant of $83,000, which was a slight improvement from $78,000 in September. At that point, BJ’s was limited to outdoor seating and off-premises at 34 of its 62 California restaurants—BJ’s largest market—for at least part of the month.

The seesaw turned sour in November and December as COVID cases rose and more states closed dining rooms, including California, which shut down outdoor seating in December. Average weekly sales per unit sank to $77,600 in November and $60,300 in December; same-store sales dropped 27 percent and 45.3 percent, respectively.

For the entire Q4, comps decreased 32.3 percent after dropping 30.2 percent in Q3. Outside of California, 26 stores across eight states were forced to close dining rooms in November and December.

However, a fresh year has brought new hope for the brand. Three restaurants were allowed to reopen dining rooms in Kentucky in mid-December while nine more did the same in Colorado and Pennsylvania at the beginning of January. Additionally, outdoor seating resumed at five California stores last week.

As a result, comps improved to a decline of 37.2 percent in the first three weeks of January. Excluding California, comps slipped 22.5 percent. When isolating Texas, Florida, and Ohio, BJ’s three largest markets after California, comps dropped 14.3 percent in aggregate during the same period. Florida and Ohio have no capacity restrictions and Texas allows 50 to 75 percent capacity depending on hospitalization rates. It’s also important to note that in recent months, BJ’s has made investments to expand outdoor seating and install glass dividers inside restaurants to improve capacity.

“Our teams are excited to continue reopening dining rooms when conditions permit,” said CEO Greg Trojan in a statement. “As we experienced in 2020 when our dining rooms reopened for a limited time, our guests are eager to return to the differentiated, high quality and high energy BJ’s dining experience.”

As of now, 133 stores have open dining rooms, 60 only have off-premises operations, and 16 only have outdoor seating. One store is temporarily closed.

Here’s how same-store sales have trended since October and a breakdown of comps sales state-by-state: 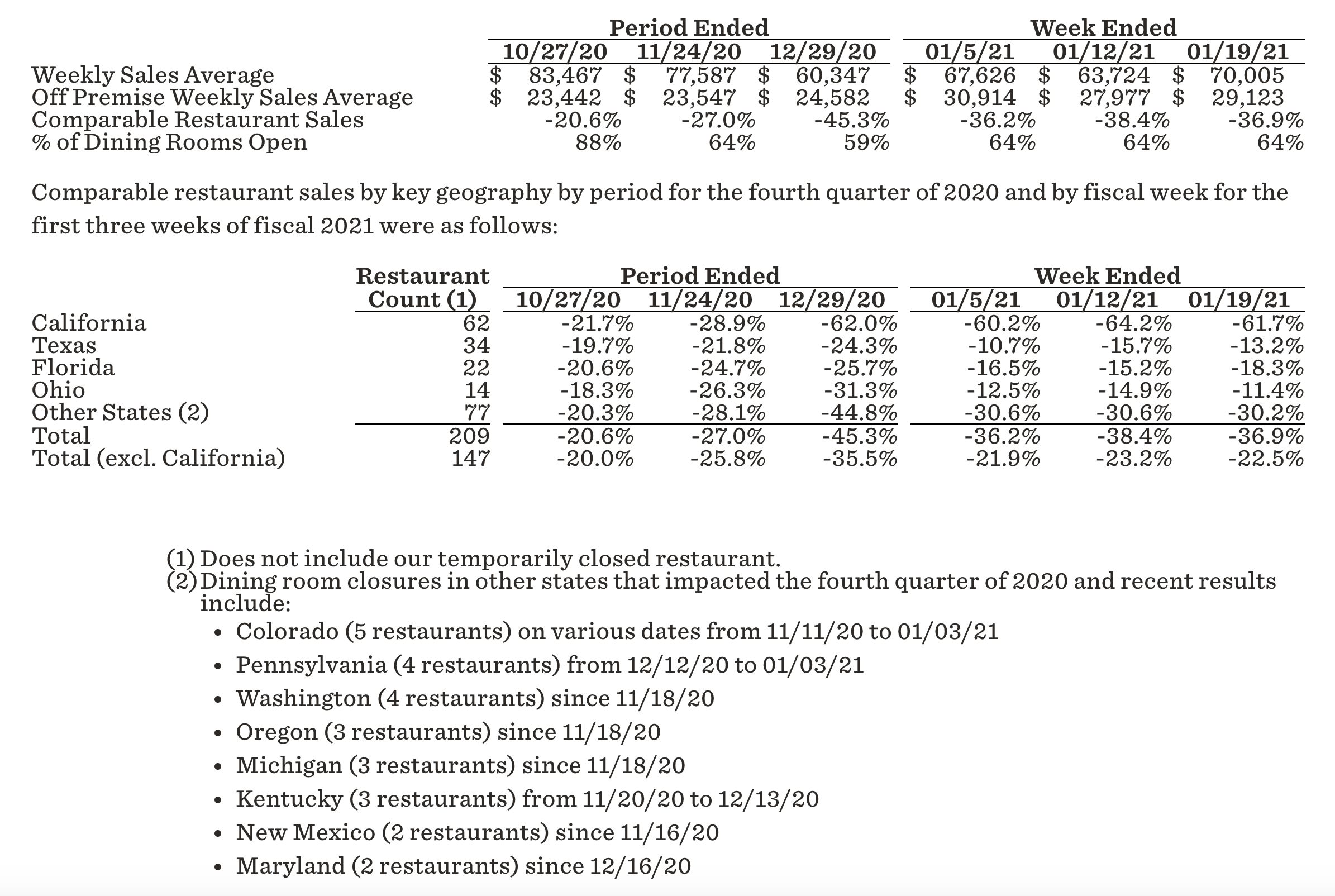 BJ’s reported that off-premises remains 2.5 times higher than pre-COVID. The chain is looking to build that growth with a new virtual brand focused on its slow roast and other protein-centric products. The brand is in early test, but has performed well. BJ’s also plans to leverage its catering business, a channel that has “significant upside for our off-premises sales channel.” BJ’s is testing a beer subscription program, as well.

“As we manage near-term challenges and demonstrate continuous sales growth in markets that have remained open, we are confident in our ability to outperform the casual-dining sector and generate long-term growth through a differentiated dining experience,” Trojan said. “ … The contraction in casual dining supply resulting from the pandemic, coupled with our sales driving initiatives and long-term opportunity to expand our concept to at least 425 restaurants nationally, positions us to continue taking market share as the vaccine becomes more widely available and the pandemic eases.”