Maggiano's expects the first remodels to be completed by Thanksgiving.

Maggiano’s Little Italy was founded 30 years ago by Lettuce Entertain You’s Richard Melman, and since that time, the chain has not only won awards, but has been praised for its atmosphere in the dining and banquet rooms.

Brand President Steve Provost says the company convinced itself that it was the rare, timeless restaurant concept. While Maggiano’s needed to spend large funds to upkeep their 15,000 -to 20,000-square-foot buildings, the chain didn’t think it needed to update them because it represented a moment in time for the Italian immigrant and the tradition of coming to America.

From research that predates Provost’s tenure, Maggiano’s found those moments to be rich and memorable for the baby boomer generation who is drawn to the likeness of Frank Sinatra and the Rat Pack. However, Gen X, Millennials, and Gen Z customers feel less connected, and the company knew it needed to bridge that gap. The chain proceeded to enlist the help of Harrison, a global design consultant firm that’s done work for several restaurants, including Mellow Mushroom, Fogo de Chão, Velvet Taco, and Slim Chickens.

“That's the first time there really was a discussion, and the challenge to the Harrison team began with how do you hold onto the past while connecting to these future generations?” Provost says.

Harrison's ideation process began with brand strategy sessions and orientation tours that included interviews with staff and guests, all of which gave the firm a better understanding of what Maggiano’s needs to move forward. Several aspects—from large to small—were covered in these discussions, says Harrison's lead designer Rachael Armstrong. For instance, through market research Harrison and Maggiano’s realized it was best to keep wood paneling instead of stripping out. Then there were items like the photos of the Rat Pack and Sinatra. Both are classic, but they don’t quite resonate with today’s consumer.

The question, “Who is this generation’s Frank Sinatra,” is a big question, but Harrison responded with a simple answer, “us.” What the company means is that society is now in a social media age where first and foremost, people tell the world about themselves. That’s why remodels will have user-generated photography and even an Instagram wall.

“We are blessed with people having events that they talk about the rest of their lives—baptisms and rehearsal dinners, birthday parties within our walls,” Provost says. “In this modern age, those are replicated on thousands of photographs that are then shared on Instagram or Facebook, and it turns out those are extremely compelling photographs. More compelling to this generation than even a celebrity.” 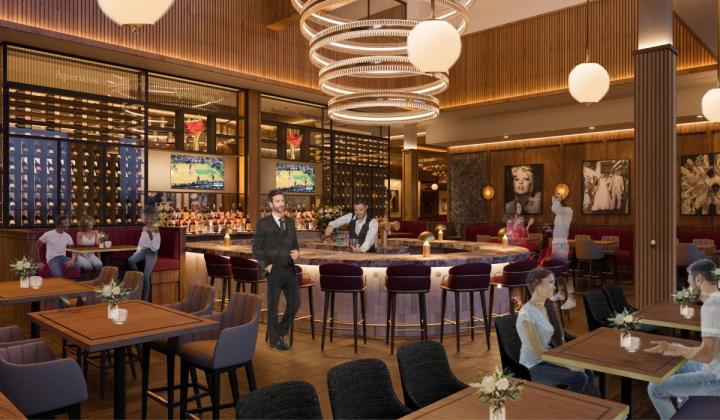 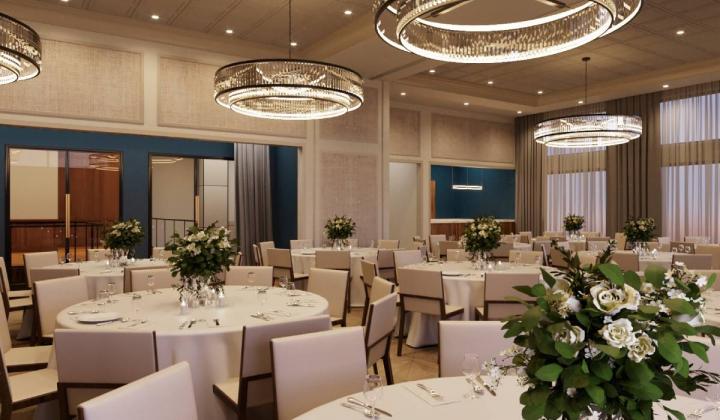 Provost says the most pronounced difference will be for banquet guests, who want servers to make them feel special, but also wish for an environment in which they can look back on Instagram and be proud of the event. The president praises Harrison’s ability to take what’s now a “masculine, dark old Italian” atmosphere and make it more appropriate for today’s wedding planner.

In the dining room, the executive believes customers will be most impressed by the subtle modernization in the artwork and music. Armstrong describes it as little “moments of realization.”

“At first it might sound like it's just your standard big band. Just your big band music that you're used to hearing, but then there's that moment of realization of, ‘Oh my gosh, that's actually the Killer's song being done in a big band way,’” she says.

Maggiano’s will also use remodels as an opportunity to streamline its carryout program. To the point that guests spend about as much time picking up their food as they would a McDonald’s drive-thru. The brand is annualizing roughly $2 million in off-premises sales, which is essentially the equivalent of a Popeyes or Panda Express. Brinker International, Maggiano’s parent company, recently rolled out virtual concept Maggiano’s Classics, which is now in more than 250 restaurants. The company expects the off-premises only brand to be in 900 restaurants by the end of next June.

“To be able to do that with scratch-made food, but the convenience of McDonald's, that's our vision for the parking lot,” Provost says. “Like in Oakbrook, we’re enlarging and moving the carryout area to accommodate that. So there's three different benefits for three different guests who use us differently.”

The exterior of Maggiano’s restaurants will receive just as much attention. None of the chain’s 52 locations, which are largely based in malls, have the same prototypical design, so Harrison’s approach differed depending on location. In Oakbrook, the restaurant has a Georgian influence, while Tampa has more of a Spanish/Mediterranean feel.

Oakbrook will have a darker color palette because the architecture style historically can handle it. In Tampa, it’s a much lighter, Floridian look; no dark elements other than a few accents on the iron railing and light fixtures.

“Each of them have the same components but they have just done it in a different way and we dial up or dial down depending on what the architecture or the environment actually looks like,” says Sarah Jenkinson, Harrison’s director of design. 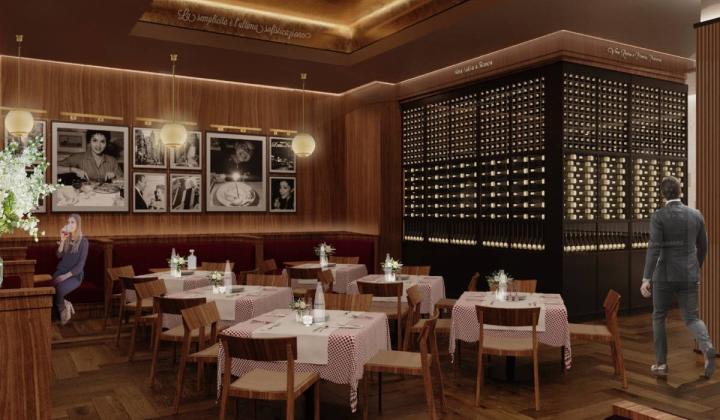 “Because there are so many different guest types for Maggiano’s, there's also a lot of different guest responses that we’re trying to evoke from the tiny little ‘Oh my gosh, I can't believe they thought of that’ to the big wow moments of ‘this is amazing,'" says Rachael Armstrong, Harrison's lead designer for the Maggiano's remodel.

Provost says remodeling candidates were selected based on age. Not necessarily to modernize the buildings, but more because Maggiano’s prefers to put earlier investments into stores that have been open longer. With this strategy, he thinks the chain can make the most profound impact.

The other key factor is that two-thirds of stores are inside malls, and all but two are leased from major landlords like Simon Property Group and Brookfield Properties. Provost knows that coming out of the pandemic, there were lines out the door of clients and partners asking for rent relief or shutting down restaurants. Maggiano’s was fortunate to be linked with Chili’s, which quickly returned to positive sales and launched $170 million virtual brand It’s Just Wings.

Because of that, Maggiano’s was able to wait, and now it’s asking landlords to consider splitting costs, given the size of the buildings.

“I think frankly they like the fact that a restaurant partner is confident enough about the future to spend half a million to a million dollars in one location,” Provost says. “And they're willing to share it. Now that's not going to happen in every location and so we're developing different approaches depending on the amount you want to spend, but that approach is why we're going to Oakbrook first. It's why we are working on our Tampa location, Denver location, because frankly we had willing landlords who are willing to partner with us in the investment.”

The first stores to receive the remodel will be Oakbrook and Plano, which should be done sometime before Thanksgiving. The company expects to remodel eight to 10 locations each fiscal year. Provost says it’s a daunting task, but as word spreads about these remodels, the chain is finding more landlords willing to make the investment.

Armstrong notes that it’s easy in design to veer off, but Harrison kept focus by remembering one aspect—the guest remains at the heart of the experience. The main goal is to attract those who grew up on the brand and ensure they’re establishing new memories with their own families.

“Because there are so many different guest types for Maggiano’s, there's also a lot of different guest responses that we’re trying to evoke from the tiny little ‘Oh my gosh, I can't believe they thought of that’ to the big wow moments of ‘this is amazing’ and Maggiano’s is definitely the place we need to be for our event,” Armstrong says.