IHOP's fast casual will focus on speed, but quality, too.

'Flip’d by IHOP' will allow the iconic brand to enter urban markets. And it all starts with Atlanta.

IHOP spent the past year developing a spin-off, fast-casual concept president Jay Johns says is going to “flip expectations.” So much so, IHOP even put it in the name.

The company announced Wednesday morning it plans to launch “Flip’d by IHOP” next April in Atlanta. Additional sites in New York City, Washington, D.C., Denver, and San Francisco are under exploration for 2020 as well, IHOP said.

The double entendre branding refers to the obvious—burgers and pancakes on the griddle—but also a hopeful category differentiator, Johns says: A breakfast fast casual that leads with food, not beverages.

“There’s a tremendous amount of people who we know go out and get their morning coffee and settle for whatever food they happen to have [at the restaurant]. We’re going to flip that expectation in the other direction,” Johns says.

For IHOP, which at 1,708 restaurants is America’s largest sit-down chain, Flip’d will be a stand-alone concept within Dine Brands’ portfolio (the company also owns 1,667-unit Applebee’s).

But for the most part, no major full-service restaurant chain has successfully penetrated the space with a serious growth vehicle.

Johns believes IHOP can do it because, simply, the guest data backs it. He says the company conducted research out front to understand what densely populated areas needed from IHOP, and what guest target it was missing. The answer: speed and convenience, and attracting a more transient base. 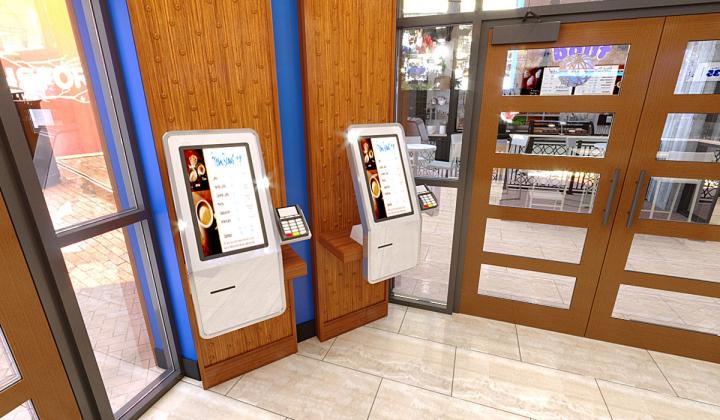 Customers can order via kiosk or at the counter. 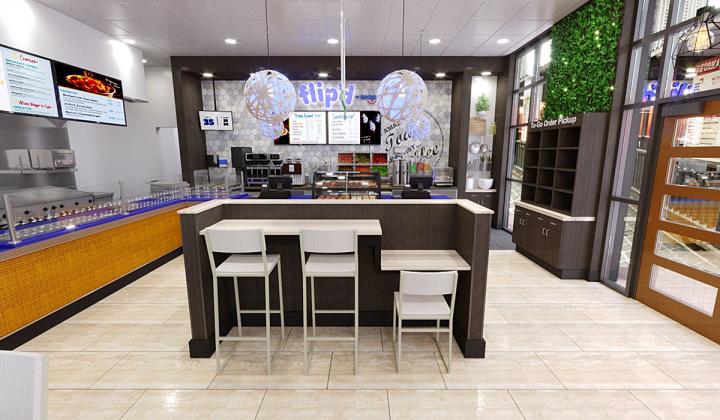 A build-your-own pancake bar? IHOP believes it will appeal to customers on the go.

“This is not the regular IHOP typical experience. So, what do people in those areas that we’re looking to develop, what do they need?” Johns says. “Let’s develop something that IHOP fans who don’t have the ability to use us in some large markets [can access]. What do they need from us? That’s what it’s really about and that’s where we started this journey.”

While still in development, Johns says the upcoming restaurant will “probably be in the neighborhood” of 2,000–2,500 square feet. Just shrinking down units and focusing on convenience, though, are not revolutionary fast-casual building blocks. That’s where the daypart focus comes into play, Johns says.

Flip’d’s menu will borrow inspiration from IHOP favorites, including its Buttermilk pancakes. But there will unique, to-go elements mixed in. For instance, Pancake Bowls, with made-to-order pancakes served in a bowl and finished with toppings like fresh berries and sauces or savory ingredients, including scrambled eggs, hickory smoked bacon pieces, and jack and cheddar cheeses.

Other menu items will include:

The final item is a critical one to circle, Johns says. It goes back to his previous comment. The breakfast counter-service landscape is massive. Between Dunkin’ and Starbucks alone, there were 24,244 restaurants in the U.S. at the end of 2018. Together, they generated north of $28 billion in domestic systemwide sales.

Yet as far as breakfast-driven quick-serves that focus on food, the category isn’t nearly as saturated. There are bagel chains, like Einstein Bros. and Bruegger’s. Panera also comes to mind, but even it pushes more than 75 percent of its business after 11 a.m. Fast-food giant McDonald’s reports about 25 percent of sales from breakfast items, while Burger King and Taco Bell have progressed further into the space in recent years. Wendy’s also announced recently it’s taking another crack at breakfast with a national launch in Q1 2020. In its case, the chain hopes to hit 10 percent of mix, or a roughly $1 billion sales opportunity. 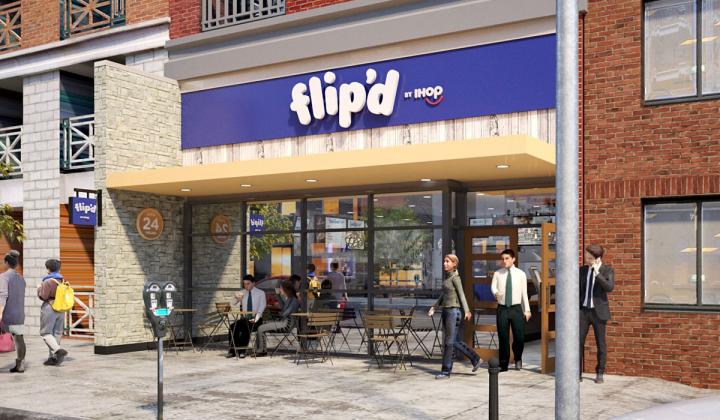 IHOP hopes to expand its urban reach with the fast casual. 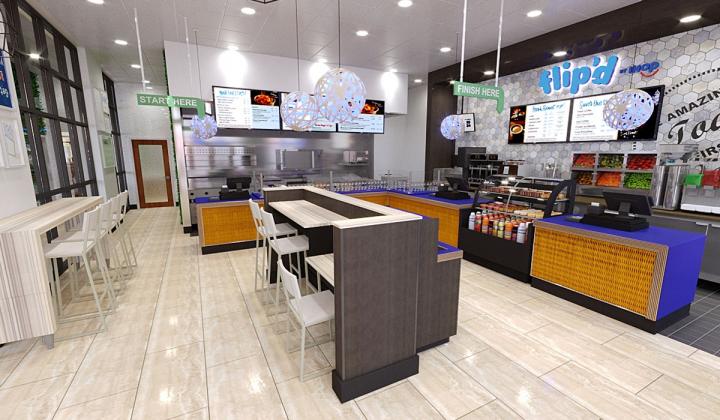 Flip’d will cater to delivery consumers as well.

Whichever angle you approach from, however, there’s undeniably whitespace in the counter-service breakfast arena. And Johns says that’s doubly the case for freshly made food and beverages supported by a chain with early morning chops that date back more than six decades.

“Today, millions of Americans are settling for sub-par breakfast foods that are either microwaved or have been sitting under a heat lamp because they’re forced to grab something while at their usual coffee spot,” Johns says.

Flip’d will have an open and interactive kitchen. When guests order, they’ll see it being built, akin to many fast casuals.

The restaurant will have digital kiosks in addition to the ability to order at the counter. Importantly, Johns says, IHOP plans to fully integrate Flip’d into its digital ecosystem to open up access points. Customers will be able to order online in advance and pick up at a designated to-go area. They’ll be able to tap into IHOP’s delivery network as well.

At the end of Q3, IHOP introduced catering to nearly 700 restaurants, with another 200 expected by year’s end.

“We envision there’s going to be a huge catering opportunity in these large cities,” he says.

Flip’d is going to have its own brand and logo. While, naturally, it will operate under IHOP’s umbrella, it will present a unique look, feel, and branding that sets it apart, Johns says.

Adding the IHOP kicker to the name was no coincidence, either. It immediately provides weight to the fast casual, especially in terms of breakfast cred.

Johns says internal research suggests the vast majority of business will be to-go. There will be some seats inside, too.

Overall, though, the goal is to get IHOP into high-traffic areas and in front of customers who have a different need state than a typical IHOP diner.

“One of the things that we’re really working on is to bring more IHOP to more people everywhere,” Johns says. “And those needs are different in different parts of the country and different areas. And we think this really gives us a great growth opportunity and there’s a lot of whitespace here. Clearly breakfast is still one of the fastest-growing areas in the restaurant business and it’s a big opportunity for us.”

IHOP has been at the forefront of family-dining innovation lately as its climbed in unit count. Last year’s IHOb name flip generated most of the buzz, famously quadrupling burger sales and resulting in more than 3.3 million tweets about the campaign.

While it did a stellar job lifting awareness, it was quietly part of a broader growth strategy at IHOP to expand daypart occasions and reach younger consumers. 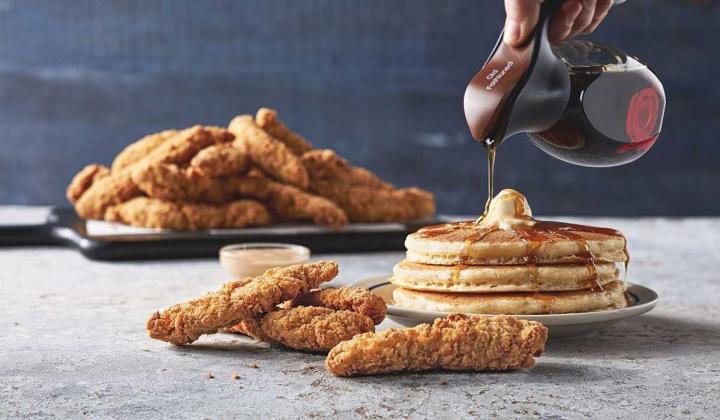 IHOP's recent chicken platform is an example of its extended daypart strategy.

IHOP is testing multiple approaches, such as price points and deals, during nonpeak hours to see what resonates with consumers and is profitable for operators.

On the digital side, IHOP’s restaurant comp sales jumped 24 percent in Q3, primarily driven by traffic. Today, it mixes a little more than 9 percent of IHOP’s total business, a lift of more than 200 basis points compared to Q3 2018.

IHOP’s immediate goal, Johns said earlier, is to grow that segment to 15 percent of sales. Delivery currently accounts for roughly a third of IHOP’s total off-premises pool. The chain offers the service at 1,400 or so restaurants through at least one provider. That’s an increase of four times the number of participating units in just the last year. Average check for online orders is 31 percent higher at IHOP than call-ins. It jumps from $16.22 to $21.20.

Expanding sales channels has allowed IHOP to create additional opportunities to drive traffic, steal share, and grow its business. And fast casual is a bold, new angle to that.

The growth will accompany IHOP’s continued unit development. The company announced October 30 a partnership with TravelCenters of America to bring 94 restaurants to TravelCenters and Petro locations nationwide over the next five years. IHOP hadn’t struck an agreement of that size in its 61 years.

IHOP’s 2019 outlook calls for 10–20 net openings globally, the majority of which are expected to be domestic.