Royalty customers spend 10 to 20 percent more, and frequency is up almost 20 percent.

Royalty Card holders don't need a reservation to skip ahead and receive a table.

The steakhouse, which has 11 units in Wyoming, Montana, Colorado, and Utah, has seen “huge demand” from customers wanting to go out and enjoy themselves. It’s an industrywide experience—51 percent of adults said they aren't eating at restaurants as much as they'd like, which is up 6 percentage points from January 2020, according to the National Restaurant Association’s 2022 State of the Industry.

However, as brands face this demand, they’re stricken with intense labor shortages that’ve forced some to limit operating hours. In that same report, 65 percent reduced business hours in the past three months because of staffing shortages.

“We had anecdotally people talking about how guests would come up to the host or hostess and say, ‘Hey, here’s some cash, can I get a table?’” Goldman says. “Things like that to try to get moved to the top of the waitlist or if they didn’t have a reservation.”

These occurrences triggered brainstorming sessions among the Rib & Chop House leadership team. What if it was possible to legitimize this transaction and engage those high-end users, or as the brand fondly calls them, “chopaholics.”

Those discussions led to the $600 Royalty Card, a monthly subscription program that provides multiple benefits to the steakhouse’s most loyal customers, such as priority on waitlists, 10 percent discount on food and beverages, $600 in gift cards each year, free birthday entrees, and a branded steak knife set. A limited number of Royalty Cards are available for each Rib & Chop House unit.

The “skip the line” perk is arguably the biggest amenity, says Goldman. If a guest comes in without a reservation and there’s a 45-minute wait, they can simply show their Royalty Card status, and they will be moved to the top of the list. Goldman says there may still be a marginal amount of waiting time, but likely just 20 percent of the normal length.

Royalty customers spend 10 to 20 percent more, and frequency is up almost 20 percent.

“It's the heavier user,” the CEO says. “We call them ‘chopaholics’—the people who when they're going out for steak dinner, we're the place they come for. We’re their restaurant of choice. It's the same ones that have been loyal guests for a really long time. They know they're going to come in ‘X’ amount of times a year or month, and they're like, ‘OK, I'm coming here anyway. So why wouldn't I take advantage of this program?’”

Rib & Chop House tested the service at two locations—which are both sold out of memberships—and recently rolled it out to a third restaurant. The plan is to launch the Royalty Card systemwide by the end of the month. The only issue right now is supply chain stoppages delaying the delivery of steak knives, but those should come in over the next couple of weeks. 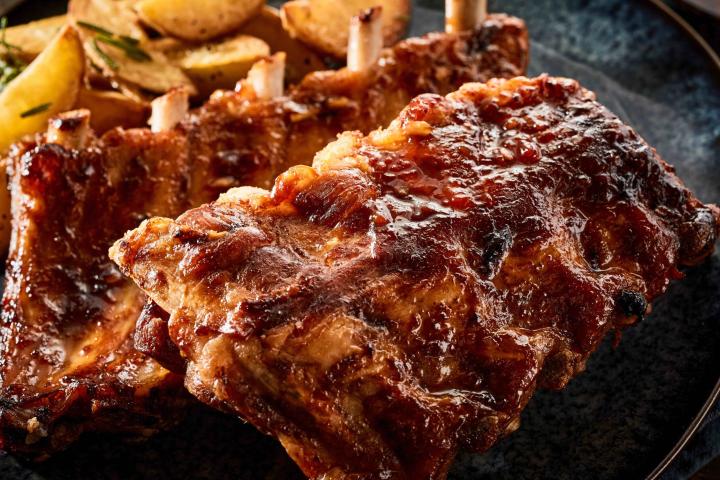 During tests, one of the significant learnings was how to properly communicate the Royalty Card to customers, says Goldman. That’s not only true for people receiving the subscription, but also for non-members waiting in long lines and seeing Royalty members move to the front.

“We've seen people who are in line and say, ‘OK I'm just going to buy a reservation. I'm going to buy a Royalty membership right now, so I can have the top of the wait list,’” Goldman says. “ … We get an email every time we get one. So like on Friday and Saturday nights, we'll see three and four back-to-back sold at 6:30 p.m. We talked about the possibility of that happening, but I didn’t know that really would. It has, which has been phenomenal for us.”

Royalty members walking into a restaurant don't affect the wait times of non-members because each store sets aside tables specifically for those users. To determine how many tables are necessary every night, restaurants use a predictive model based on seating capacity, whether it’s a weekend or weekday, what may be happening in town, and how many memberships have been sold.

For example, if a store has 150 memberships and its Friday night, it may hold five or six tables. The system assumes some Royalty members are still making reservations.

“It's more for they're driving around town and just got back in town like, ‘God I would love to just sit down and have a meal’ and you can go there, we know the wait won't be too long because we have this royalty membership,” Goldman says. “But it's not like royalty members don't continue to use our existing reservation system.”

Although it’s still early, no member has canceled their subscription yet. The program renews each month automatically, with no long-term commitments. Goldman says the steakhouse considered making it an annual deal, but that was viewed as too aggressive, especially without knowing more details about execution and feedback from members and non-members.

“We wanted to tread lightly because you never want to do any program like this, but it ends up backfiring on you and you upset guests or anything of that effect,” Goldman says. “So we've just been going slowly, going as fast as we can, but being very thoughtful about how to do it in a way that increases frequency, increases average ticket.”

“It makes a great experience for the guests and for the employees too; they usually get some more by Royalty members, as well,” he adds. “They are higher tippers, they have higher ticket averages. They're happier. It's a real positive.”

The Royalty Card is different from Rib and Chop House’s Member Rewards, which allows customers to earn 5 percent back on all purchases and $10 back for every $200 spent. Similar to that loyalty program, Goldman envisions the steakhouse using the Royalty Card to gather more information about heavy users to understand what it takes to drive more traffic among all customers. But those conversations are for the future as the chain remains focused on a smooth launch.

Goldman expects the attrition rate to become clearer after a year, and at that point, Rib & Chop House can flex the program to ensure guests are receiving the right benefits. All those decisions will be supported by customer surveys and focus groups.

The steakhouse already has plenty of other ideas in the bank, such as quarterly gifts (cookbook, chef coat, and wine glass) and a concierge phone number that Royalty Card users can call if they’re planning a special event.

The goal is to take it to that next level, but first, Goldman says, Rib & Chop House must navigate the hurdles.

“We've made some objective numbers that had to hit before we do that,” he says. “And then also we just want to get the right feedback that says, 'OK what do we need, what do we need to do here to make sure that we're executing?'”