How The Melting Pot Strengthens Ties with Franchisees

The fine-dining concept is sparking development with new incentive programs.

The Melting Pot has proven that even as an experiential dining brand, it has what it takes to weather through a global pandemic.

Sales have grown 20 percent over 2019 levels based on Q2 numbers, and with a new menu, customers are spending more per visit. This gives The Melting Pot more confidence in its ongoing expansion strategy. The 96-unit brand is aiming for 125 restaurants by 2026, and it plans to leverage two franchise incentive programs to get there.

As part of the offer for existing franchisees, The Melting Pot will waive the $45,000 initial franchise fee for one store and reduce royalties on that location for the first two years of operations. Also, the chain's referral incentive program awards $25,000 to current operators if they refer a qualified candidate who signs on and opens a new franchise within one year.

As a brand that’s been around for 45 years, many franchisees have been in the system for a long time, and they’ve performed well, says Shak Turner, The Melting Pot’s senior director of franchise development. Now it’s time to spark growth among that group.

“We wanted to continue to move forward with the company on operations and marketing and development,” Turner says. “The programs are really designed to ease that burden or to just assist or help them and say, ‘We're in this with you together.’”

The Melting Pot was part of an experiential dining segment that faced significant headwinds when COVID first arrived. In the initial weeks, sales dropped 82 percent among fine-dining operators, and 72 percent had to lay off 75 percent or more, according to Datassential. Black Box Intelligence found that average check decreased 43 percent in the week ending March 27, 2020.

READ MORE: The Melting Pot is Ready to Get A Lot Bigger

A year and half later, however, upscale restaurants have experienced a resurgence as consumers resumed their celebratory occasions and dine-in routines. Darden Restaurants’ fine-dining concepts, The Capital Grille, Eddie V’s, and Seasons 52, saw a 24 percent increase in first-quarter sales versus pre-COVID, even though it’s historically the slowest period of the year for the company. Ruth’s Chris Steak House’s same-store sales increased 8 percent in Q3 compared to two years ago.

Turner describes the past year as a roller coaster for Melting Pot franchisees, with COVID putting a pause on many development efforts. He adds that the incentive programs are a way to partner with operators who could use the money to potentially upgrade in size of real estate or invest in grand openings, marketing, and hiring efforts.

Because The Melting Pot has solidified itself as a brand for special occasions, Turner says development has to be measured and meticulous. Guests visit the restaurant just over two times per year on average.

“We want to make sure that when we're going into markets that our goal is not to over-saturate the market or to negatively impact an existing Melting Pot that is there,” Turner says.

That means The Melting Pot has a limited supply of markets available for growth. So while it may not appear aggressive to other companies, the growth Melting Pot is undertaking is aggressive for its own scale, Turner says. The Melting Pot is looking to grow in Southeast regions like Memphis and Chattanooga, Tennessee, Birmingham, Alabama, and Texas markets like Dallas or Houston.

Since announcing the incentive program, The Melting Pot has already seen much excitement from franchisees because of the potential opportunities, Turner says.

Spokane, Washington franchisees Kim and Hollis Silva say they are an example of the success that can come from The Melting Pot’s franchise incentive programs. They were recipients of the Path to Grow program, which provides financing to Melting Pot employees to become owners.

Kim began as server and bartender at the Spokane location in 2008 and worked her way up to general manager. During this time, Kim realized the unique experience The Melting Pot offered guests while they celebrated special occasions, and she was hooked.

When the Spokane owner at the time was eager to sell, Kim and her husband Hollis, who also worked at The Melting Pot, were given access through the Path to Grow program. They’ve since added the Boise, Idaho, location to their portfolio.

“We're very blessed by the Path to Grow program that afforded us a lot of things in our life that we wouldn't have been given just because we didn't have a lot of money starting out,” Kim says. “I think it's just a great example of people that are willing to work hard and what this program can really do for the brand.” 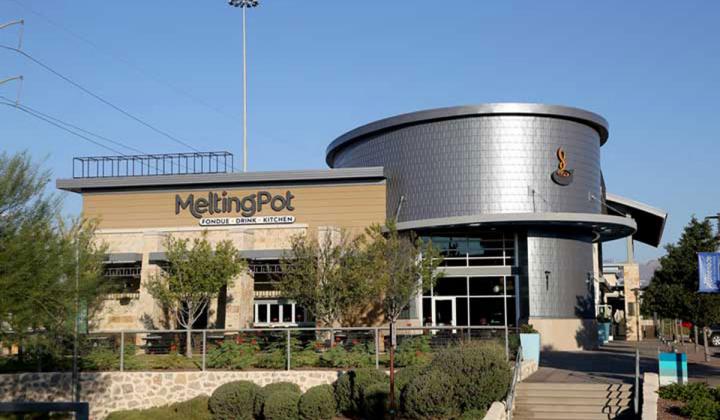 The brand’s incentive and referral programs were designed in part to combat the labor shortage, along with a hiring campaign and more online training modules for franchisees.

When their locations shut down during the initial part of COVID, the Silvas say they struggled to hire and retain employees. Many of the employees who had worked in restaurants for a long time moved on to other industries.

“We were limiting reservations, which is unfortunate, because you'd hate to turn people away that would like to spend money at your restaurant because you can't give them good service with the amount of staff that you have,” Kim says, adding their restaurants are slowly but surely back to where they want to be staffing-wise.

To continue reaching customers, The Melting Pot rolled out its first-ever to-go options.

“While that definitely takes away from the experience of The Melting Pot and coming in, dining and cooking your food around the fondue pot on the table, what COVID has allowed us to do is to really meet our guests in the way that they want to interact with us much better than we had before,” Turner says.

Still, experiential dining will remain at the forefront for The Melting Pot, with off-premises only mixing 1 to 2 percent. With dine-in Turner says the restaurant’s setup is more spaced than a typical casual-dining concept, putting customers’ minds at ease.

“At Melting Pot, one of the things that we'd like to do is provide that intimate experience, whether somebody's celebrating an anniversary, or a birthday party or graduation or just a date night or girls’ night out,” he says. “Our dining rooms are typically a little bit more private and so gave people the feeling coming out of COVID of being much more comfortable coming into our restaurants.”

Both of the Silvas’ locations in Spokane and Boise are outperforming their previous sales numbers, by around 65 and 70 percent, respectively. They attribute the recovery to the support they’ve received from The Melting Pot, whether it’s webinars on recruitment, building culture, or developmental franchise programs.

Moving forward, The Melting Pot will continue to ask itself how else it can support franchisees, Turner says.

“We're very lucky to have a system that the majority of our franchisees are very engaged, very passionate and very driven to ensure the perfect night out for their guests when they come into the restaurant every day,” Turner says. “The goal is to continue keeping our franchisees happy and partnering with them.”