IHOP's Buttermilk Crispy Chicken platform is an example of its continued daypart expansion.

The family-dining leader didn't stop at a name change.

Heading into its 60th anniversary last year, IHOP was static. On June 4—the day it dropped the IHOb social media bomb, trends tracker YouGov found that 14 percent of American adults were talking about the brand. Within a month, it was 29 percent and leveled out at 20 percent by September. Even so, the figure was still higher than anything IHOP attained pre last-letter flip. YouGov tracked the brand going on six years to that point.

We’re now just about a year removed from IHOb and all the buzz it wielded. Famously, the chain’s burger sales quadrupled and its digital business boomed as younger consumers gave the brand a try. IHOb extended beyond just morphing into a flash-bang traffic deal, though—it brought IHOP back into a discussion it was quickly fading out of.

However, when that reality took hold, IHOP was faced with a fresh task: To make sure its brand and product, accessibility and technology, was first-impression worthy.

At the end of fiscal 2018, IHOP said 51 percent of its customers were aged 34 and below. Thirty-two percent of those were 18–34 and 19 percent under 18. Per the NPD Crest report, with Denny’s, Cracker Barrel, Bob Evans, and Panera Bread factored in, just 34 percent fall into that first category. The vast majority—41 percent—are 55 and older.

To put it simply, IHOb did IHOP a lot of good, well beyond the top-line. Just for one statistic, there were more than 3.3 million tweets about the IHOb campaign last year.

Nonetheless, that doesn’t mean sales should be ignored, especially now that we can take a 12-month view. IHOP’s same-store sales inched .003 percent in the third quarter of 2019 compared to the period when IHOb pulsed. While just above the line, it gave the brand seven consecutive periods of growth.

Hit the gas on green

What also happened during this stable run is that IHOP quietly became the largest sit-down chain in America. The chain opened 34 U.S. and 11 international restaurants in Q4 2018 to surpass the 1,800-unit mark. And it also eclipsed 1,700 domestic restaurants (1,705 to be exact) to sail sister chain Applebee’s (1,693). They’ve been pulling at two different sides of the growth rope in recent quarters as Applebee’s looks to exit underperformers from its system—something its done to the tune of roughly 10 percent of its fleet.

And while Applebee’s plans to return to “selective new unit development” toward the end of 2020, IHOP just signed its biggest franchise deal in brand history. The company announced October 30 a partnership with TravelCenters of America to bring 94 restaurants to TravelCenters and Petro locations nationwide over the next five years. IHOP hadn’t struck an agreement of that size in its 61 years.

Dine Brands CEO Stephen Joyce said in the company’s Q3 review that “we are very bullish on IHOP’s growth and believe that it’s going to accelerate in the future.” IHOP’s 2019 outlook calls for 10–20 net openings globally, the majority of which are expected to be domestic. That’s where Joyce’s comment figures in. IHOP predicts the net growth to lift significantly in the coming calendars. In other terms, this expansion conversation is just getting started. 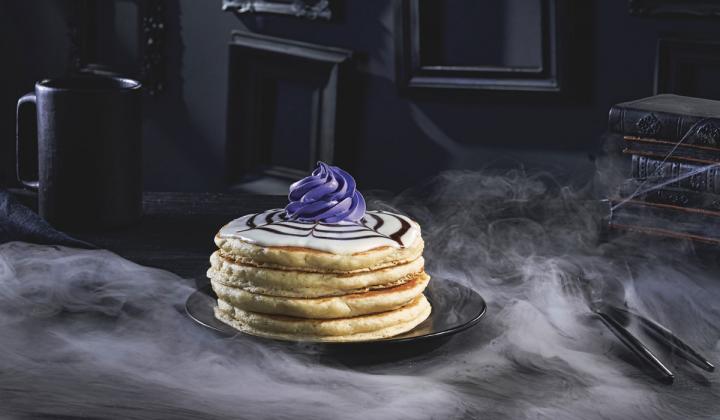 IHOP launched a menu inspired by The Addams Family in September.

Where are we now

When understanding how IHOP’s bold marketing and performance align, it’s always worth noting something less sexy. IHOP’s four-wall profits over the past few years have served steady, especially measured against other casual brands, including Applebee’s, because its food and labor costs are lower. Comparing the first half of 2019 to the same period of 2018, IHOP franchisees actually had higher margins, CFO Thomas Song said.

The market basket for IHOP’s cost of goods is expected to be favorable by about 90 basis points for 2019. Breakfast, and breakfast foods, just tend to show a higher-profit mix than other commodity targets. It’s why quick-serves market so aggressively to guard share in the street fight that is early occasion and habitual dining. McDonald’s captures about 25 percent of its sales from breakfast, despite recent struggles. Taco Bell hit 10 percent mix within two years of launch in 2014 and has run up positive comps in 17 of the last 18 quarters since, including 12 consecutively.

Just look at Wendy’s. The burger brand is making its fifth attempt at daypart expansion in Q1 2020 when it plans to launch breakfast nationwide. Wendy’s is targeting 10 percent, which would represent a $1 billion slice. And its planning to do so with only three additional employees per restaurant, focused on the drive thru.

Beyond that factor, though, IHOP is clearly doing something different than before. It’s always served and centered on breakfast, but it just now put together its longest sustained positive sales performance in three years.

Jay Johns, who took over when Darren Rebelez left for Casey’s General Stores in June, said after Q3 the results are a “direct reflection of the work we’ve done against our strategy to defend and grow our brand.” Johns served as IHOP’s SVP of operations since April 2017 and has been with the brand for a decade.

Johns said IHOP sharpened its focus on operations during this run, which helps keep current guests, drive frequency, and attract new ones. “At the end of the day, best-in-class operations comes down to having great talent in our restaurants,” he said, in uncomplicated fashion.

IHOP got there, to an extent, by rolling out a certified leader program this year that aids retention and continual training. Johns said IHOP will certify more than 2,000 managers by the end of next year. Given that inspiring retention on the crew member level is a somewhat unrealistic goal to any major, consistent degree in this business, and like adding house money to the deck, keeping managers on staff is really where the labor war will be won for service-oriented restaurants. 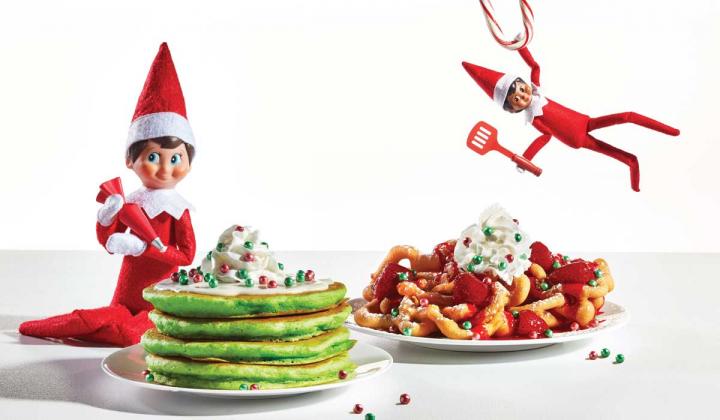 Elf on the Shelf and IHOP? These kind of offbeat campaigns have been a hit with guests and fit seasonal trends.

The National Restaurant Association estimates turnover costs $2,000 per employee, but it rises to $14,000 per restaurant GM by TDn2K’s data. Most restaurants figure the turnover number in the triple digits. TDn2K said turnover for managers remains at “historically high levels and continues to be a concern, particularly because of the influence of management on hourly retention and engagement.” And unlike crew members, managers aren’t necessarily cyclical workers who show up for one summer and move on.

Operators don’t need a calculator to know good managers trickle down into better employees, who then provide superior service. It’s the age-old notion that a team member’s expectations should exceed that of a guest’s. Hard to preach that ethos without engaged leaders.

Over the last couple of years, IHOP has also simplified its core menu and recipes to improve execution. It’s lead to better, and more consistent, guest experience. So has the chain’s corrective steps to address underperforming restaurants, Johns said.

Yet defending IHOP’s core business is only half the battle. “In order to grow the brand, we need to be on the guests’ minds and in their path,” he said. “Everything we do in both the long and short term is about our second foundational priority—driving traffic.”

“There are more than 60 billion meals up for grabs,” Johns added, “and we believe there’s sustainable opportunity to steal share from the competition, both within and outside the category.”

There are two sides to that directive: One, develop a strong, multifaceted value proposition. IHOP has long nurtured abundance (all-you-can-eat pancakes every year). “However, we need more,” Johns said.

He noted IHOP is testing multiple approaches, such as price points and deals, during nonpeak hours to see what resonates with consumers and is profitable for operators.

Expanding its p.m. business has been a key focus for IHOP for the last 18 months or so. Johns said the “ideal combination of abundance and value” boosted chicken sales by more than three times at its peak. And it sustained item incidents at double the amount of chicken sold prior to the new menu introduction.

IHOP also hit a food milestone of sorts in September when it introduced gluten-friendly pancakes. It brought GF waffles and buns for steakburgers (made with a blend of rice flour, milk, egg whites, and a touch of honey for sweetness) to the offering as well. Johns said doing so was one of the most requested innovations for IHOP, “and we believe the addition of these new items allow us to reach both current and new guests looking for great tasting quality menu items made without gluten.” 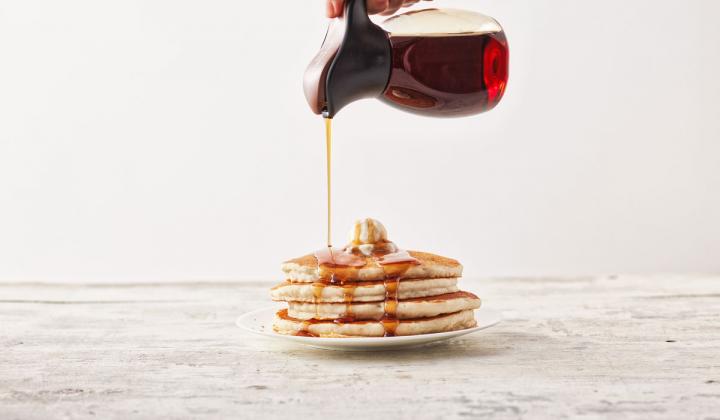 The other part to this guest buzz equation is the marketing. IHOP may not have changed its name lately (although it did, kind of, in June when it started calling burgers pancakes), but it’s stayed on the offbeat path with Elf on the Shelf and Addam’s Family activations to creating “the world’s tiniest house of pancakes” in partnership with A&E’s “Tiny House Nation.” The 170-square foot restaurant, equipped with a functional kitchen, pancake griddle, and seating for six, is opening for four nights in December, with a reservation-only dinner series in LA featuring a special menu inspired by IHOP classics. And the sign-ups are exclusive only to members of its MyHOP perks email club program.

“We'll continue to find fun, creative ways to drive sign-ups for our email club, while also deepening our engagement with our current subscribers. More IHOPs in more places is the final push to grow the brand and drive traffic,” Johns said.

IHOP’s off-premises expansion has been key to its improved performance, too. Away-from-restaurant comp sales jumped 24 percent in Q3, primarily driven by traffic. Today, it mixes a little more than 9 percent of IHOP’s total business, a lift of more than 200 basis points compared to Q3 2018.

IHOP’s immediate goal, Johns said, is to grow that segment to 15 percent of sales. Delivery currently accounts for roughly a third of IHOP’s total off-premises pool. The chain offers the service at 1,400 or so restaurants through at least one provider. That’s an increase of four times the number of participating units in just the last year.

It ticks off several boxes for IHOP. One, it’s simply where the customer is headed. But, also, if you look at year-over-year check trends, there’s more to gain. Average check for online orders is 31 percent higher at IHOP than call-ins. It jumps from $16.22 to $21.20.

A near-term chance arrived at the very end of Q3, when IHOP rolled catering to nearly 700 restaurants. Another 200 are expected to participate by year’s end. It’s too early, Johns said, to measure performance, but the brand is “very optimistic about the potential for this business.”

Moving forward, Johns said, IHOP will continue to execute against these strategies, which are drawing a roadmap for its growth. Limited time and core menu innovations paired with strategic offers are driving repeat visits and first-time experiences.

“Having the right food served in a great environment by outstanding operators is the best way we can defend the brand,” he said. “To grow the brand, we're focused on significantly improving our lunch, dinner, and overnight business, expanding our to go business, and building new restaurants. All of this is supported with technology that improves the guest experience and maximizes restaurant efficiency. We are confident in this approach, as stated. We are already seeing great results.”