Though Grimaldi’s is known best for its New York–style pie, the menu also includes starters like the Bruschetta Trio.

After COVID put growth on pause, the iconic brand is charging forward.

Grimaldi’s Pizzeria had its eyes set on growth in the spring of 2019.

The strategy began with the announcement of a new domestic franchising program in April of that year. That was followed by the hiring of Michael Flaum, an industry veteran who joined the brand as director of franchise development, with more than a decade of experience as an owner, area developer, and multiunit franchisee of Cold Stone Creamery.

Flaum says the franchising journey started quietly, and Grimaldi’s didn’t attend shows or other public events. The first step was making sure everything was in line, and once that was the case, momentum increased. But nothing curbs momentum more than a far-reaching, global pandemic that grinds progress to a screeching halt. Due to the uncertainty brought forth by COVID, Grimaldi’s was forced to put development on pause.

However, 2021 proved to be a different story. 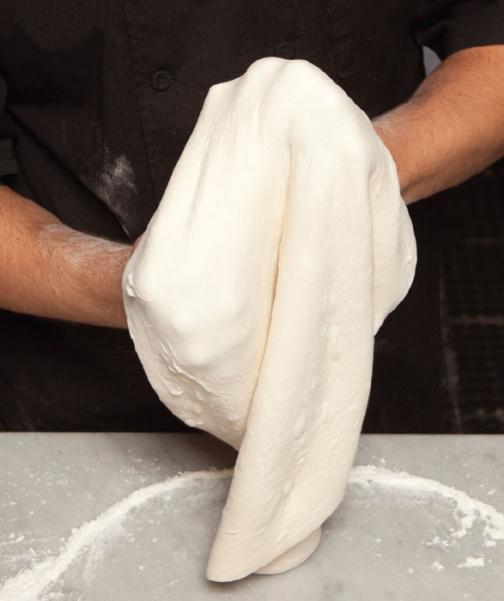 “Once 2021 came around, we anticipated—and it happened—that the pandemic left a lot of great opportunities for expansion in general, but also for our concept in new markets,” Flaum says. “And the interest has been just increasing every month. Franchise groups after COVID really recognized the ever-increasing demand for pizza.”

The strength of the pizza category coupled with the real estate opportunities and the low cost of financing drove interest in franchising, he adds.

Because of that growing interest, Grimaldi’s hope to build a franchise base in the U.S. is near fruition. At the end of June, the coal-fired brick-oven pizza chain announced an agreement with Power Brands Hospitality, the first domestic franchise deal in company history. The operator plans to open two stores in Huntsville and Birmingham, Alabama.

“Our goal is to continue to expand, to serve Grimaldi’s authentic New York–style, coal-fired, brick-oven pizza,” Flaum says. “But we want to do it in a strategic and measured way. We’re going to create platforms for success and synergies between our corporate and franchised restaurants. We’ll grow when we have the interest in those markets, but we want to make sure that we have qualified groups to do that and that we can bring success to those franchisees.”

In the past 18 years, Grimaldi’s has grown to roughly 40 stores in 11 states. Alabama will be a new market for the brand, but Flaum says the chain’s restaurant support team has significant experience in efficiently launching stores in untapped areas. For Alabama specifically, the key will be leveraging Power Brand’s intimate knowledge of the state.

Flaum notes that Power Brands perfectly aligns with what Grimaldi’s seeks in a franchise partner. Among the important success factors are previous management experience, system-oriented processes, and an ongoing desire for operational excellence and memorable guest experiences. Grimaldi’s is looking for more than just investors. Instead it prefers people who are passionate about the brand and show a willingness to be involved in the community and the daily operations of the restaurant.

Power Brands, which has been in business for 30 years, checks those boxes. Beyond the strength of the partnership itself, Flaum says awarding a development agreement to Power Brands represents the company’s first step toward achieving its vision of serving an exceptional dining experience in every neighborhood across the country. He adds that it’s the beginning of what appears to be a huge opportunity to expand in the U.S. and the rest of the globe.

“Over time we’ve developed and refined our restaurant operating systems because we operate across the United States already,” Flaum says. “And we refined those operating systems and processes, and we’ll provide our franchisees with a road map and hands-on support. We can deliver that for the successful execution of the Grimaldi’s brand for them. So we have experienced growing our brand already and finding the right people, which we have with Power Brands. We’ll just provide them the same tools and systems that we've done internally.”

When it comes to future U.S. franchise opportunities, Flaum says the relationship with Power Brands is not a test or trial run, and Grimaldi’s isn’t waiting for the Alabama stores to open before striking more deals. The ongoing discussions involve much due diligence from both the restaurant and the potential franchisees. Once Grimaldi’s finds another candidate in the right market that fits the culture and vision, it will pursue another award.

In the meantime, the growing chain continues to innovate and perfect its store design prototype. Prior to COVID, off-premises represented a small part of business, but the pandemic forced a change. And even as dine-in sales have returned, sales outside the four walls are holding strong and bringing in a separate revenue stream. As a result, Grimaldi’s is evolving its future stores to balance in-restaurant dining and to-go orders, such as developing boxes with multiple pizza ovens and testing ghost kitchens in a couple of markets.

And that’s not just for U.S. expansion. The chain also awarded a multiunit development agreement with Tablez Food Company to open five restaurants in the United Arab Emirates. As in the U.S., Grimaldi’s is in constant talks with international franchise groups from all over the world.

The pizza chain is committed to growing its brand, Flaum says, both domestically and internationally, with company-owned stores and franchised restaurants.

“We want to create wonderful and memorable experiences for friends and families in our restaurants, and we'll continue to grow it domestically and internationally with a combination of company-owned restaurants and franchise restaurants by finding the best-in-class franchise groups to do that with,” he explains.

“Most importantly, we want to grow our brand in a businesslike way, finding the best franchisees that fit our culture and brand, and then find the best sites in their markets using their market intelligence,” he adds. “We don’t want to go too fast and not be successful for our franchisees, our brands, and our guests.”

Are There Too Many Virtual Restaurants?
Qu Introduces Protective Redundancy for Restaurants with Commerce Cloud
Restaurant365 Appoints Two New Executives