First Watch is one of the fastest-growing concepts in its segment.

First Watch Rises to the Top of Casual Dining

The breakfast brand was crowned America's favorite brand by Market Force. What does it say about the industry?

Editor’s note: This is the first in a series of stories on the state of casual dining based on exclusive Market Force Information data.

Chain restaurants have always fought a unique battle. They not only compete with each other, but with an independent scene that dominates the total U.S. dining landscape in terms of sheer volume. In August 2018, The NPD Group reported a 2 percent drop in single-unit restaurants—there were 352,815 that spring. While down 5,719 from the previous year, it still represented more than half of all U.S. commercial restaurants. Per CHD Expert, the pool of restaurants with 10 or fewer locations counts for 68 percent of all domestic eateries. (Here's a look at the 32 biggest chain restaurants in America).

NPD estimated that independent commercial operators would spend $43 billion with foodservice manufacturers in 2020, a 3.4 percent compounded annual growth rate over 2018. It will comprise 14 percent of total restaurant operator spend, according to NPD’s Foodservice Future Views.

Forgetting the volume part of this equation, though, chains face another roadblock. There is often, especially among younger consumers in dense, urban markets, negative bias (right or wrong) attached to multi-unit concepts and the generalizations that follow.

But what many brands realize today is that perception spins two ways. It’s why you see legacy chains working backward, in many cases, with their messaging. What happened a few years back, as millennials matured into the marketplace, was that restaurants observed demographic megatrends and decided they had to act now or get buried. Mostly, it led to classic concepts reinventing themselves to fit the needs and desires of guests who grew up in a different generation, with different experiences. And this is where brand drift set in for some of casual dining’s biggest players. In the quest to connect with millennials, restaurants barreled down a path of changing everything they stood for. Abandoning their brand distinction in hopes of appealing to all generations.

The unintended side effect being that loyal customers—some who frequented a certain restaurant for decades, sharing through generations—walked into their regular spot and found it unrecognizable. It morphed into just another restaurant chain. And now, the aforementioned battle with independents progressed to critical levels. Because whether or not an iconic chain had 500 or 2,000 locations, it typically got there by following its North Star brand positioning, market-by-market. It was differentiated on day one. Then you toss in a challenged economic climate and other, common restaurant issues, and chain operators quick-reacted, tossing aside their tried-and-true playbooks instead of latching on to brand strengths. Losing grip on their core, in other terms.

This issue has reversed pretty dramatically recently. And what many chains discovered is that their original DNA was actually more appealing to millennials than they thought. IHOP, for one, reported that 51 percent of its customers were aged 34 and below at the start of last year.

Yet, no matter how you look at it, one of the biggest issues with brand drift is that it spreads restaurants thin and gets them away from the basics: Quality, service. Brands that try to stand for everything typically aren’t great at anything. It’s a formula that just doesn’t work today when guests are more discerning than ever.

Market Force Information’s annual casual-dining study—one of the most cited in the industry—surveyed 6,598 U.S. customers on their eating habits, brand preference, visit frequency, brand engagement, customer experience, meal delivery, and social media usage. The goal: Take the pulse of one of the restaurant world’s most-fluid categories and see where the opportunity lies.

“It has been our observation through the last five years of this study that success in casual dining more than other restaurant segments really relies on two key factors; the first is the quality of the front-line staff in the restaurants and how trained and engaged they are and the second is making the meal more than just a transaction,” says Brad Christian, chief customer officer at Market Force. “Creating a differentiated experience still matters. Those brands that execute consistently on their brand promise outperform their peers.”

Here are how this year’s rankings sorted out, measured by the company’s Composite Loyalty Index metric (the average of percentage recommended plus percentage of satisfaction at the brand level). It includes restaurants across multiple sectors.

Speaking to the initial, independents point, here’s an interesting data set that emerged from Market Force’s study. Only two of the seven food categories studied (breakfast, buffet, general menu, Italian, pizza, seafood, and steakhouse) favored casual-dining restaurants over locally owned spots for the question, “If given the opportunity, which type of casual-dining restaurant would you choose?”

Breakfast was one: 58 percent said they’d go chain over locally owned. General menu was the other at 61 versus 39 percent.

You can see the full results below. 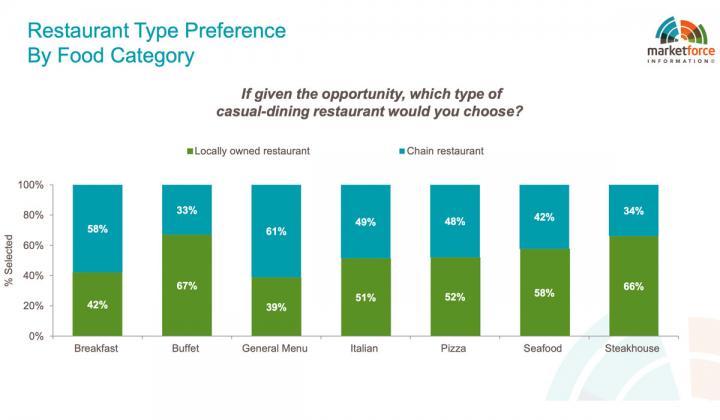 With First Watch, a 370-unit brand with restaurants in 29 states, taking the top spot, let’s focus on breakfast for this first story. We’ll get into the other categories and some side topics, like tech adoption and delivery, in later pieces.

Breakfast and brunch: a place for full-service to win

Breakfast has always been an intriguing category in the sit-down world because it provides clear points of differentiation versus quick-serves. For starters, frequenting Dunkin’ on the way to work and grabbing a meal at IHOP on Sunday are two very different occasions. Additionally, as many upstarts, like First Watch, are leveraging, there’s a beverage attachment opportunity that promotes social gatherings in a way few counter-service competitors can. And it fits snuggly into that millennial mindset so many full-service chains are chasing.

Market Force found that 41 percent of the customers it polled said they’ve eaten at a breakfast casual-dining chain in the past 90 days. Here’s how it broke down.

You can see clearly the space breakfast can thrive in: Social gatherings and family. Both are powerful targets in today’s full-service, market-share grab because they represent destinations. It’s harder than ever to chase spontaneous traffic given the convenience options at hand. It doesn’t help that malls are struggling to generate consistent crowds below the A-plus level, too. So, being able to cater to very specific needs—feeling comfortable dining out with your children and meeting friends—are great places to be. And, in this case, they can work together with young families hoping for a social break with other young families.

That would explain why the segment has grown in recent years as millennials age. But with that reality comes competition and the need to win somewhere other than daypart focus.

This chart below shows how breakfast chains have done a solid job on that level. 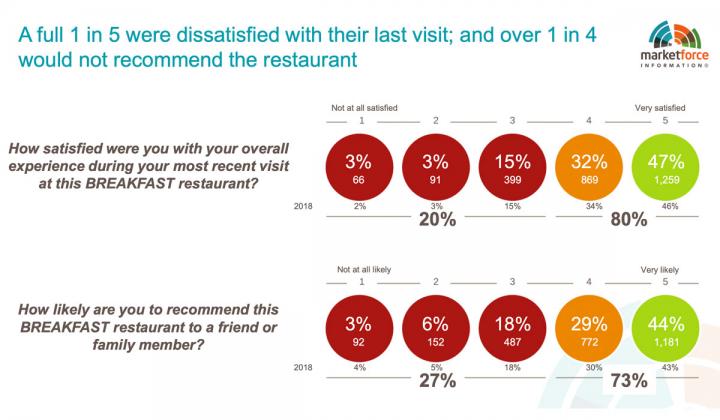 This one, however, tells the real story. 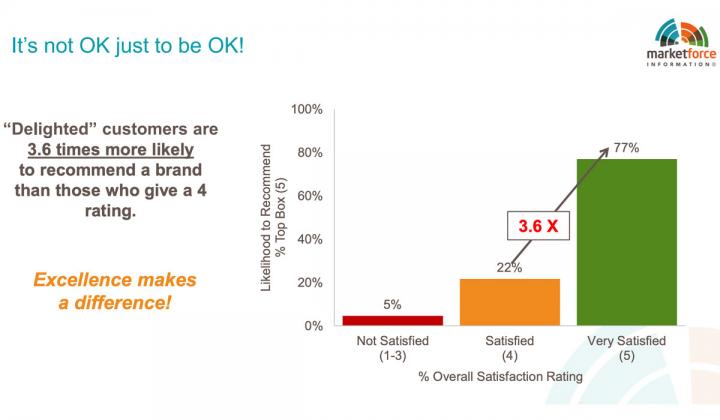 For the question, “which of the following breakfast casual-dining chains have you visited most recently?” IHOP took top billing.

Some of that, surely, has to do with the fact IHOP and Denny’s are the largest full-service breakfast brands in America (in that order). IHOP is actually the largest sit-down chain across all segments with 1,705 domestic restaurants. Sister brand Applebee’s has 1,693.

But the legacy giants also deserve credit for their ability to innovate while staying on-brand. Here’s more on how IHOP has done so through smart marketing and timely menu innovation. Here’s a deep dive into Denny’s tech- and design-centric efforts to reach new customers and satisfy die-hards.

You might be asking why First Watch is at the bottom. It’s simply a matter of the emerging arrow pointing up. The Advent International-owned brand was founded 1983 in Pacific Grove, California. But roughly 15 years ago there were just 60 locations, making it one of the fastest-growing daytime-only concepts in the country. First Watch hired Greg Barber as its first chief transformation officer in mid-January. He spent nine years working for PepsiCo, Inc. and clocked time with Mrs. Fields Famous Brands as president of TCBY. His role with First Watch is to lead strategy development.

In Market Force’s study, First Watch sailed competitors when it came to trial.

And here’s where First Watch is shining on the ground level. 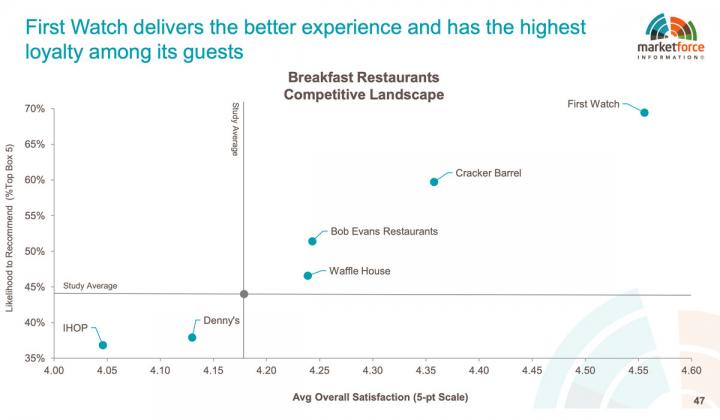 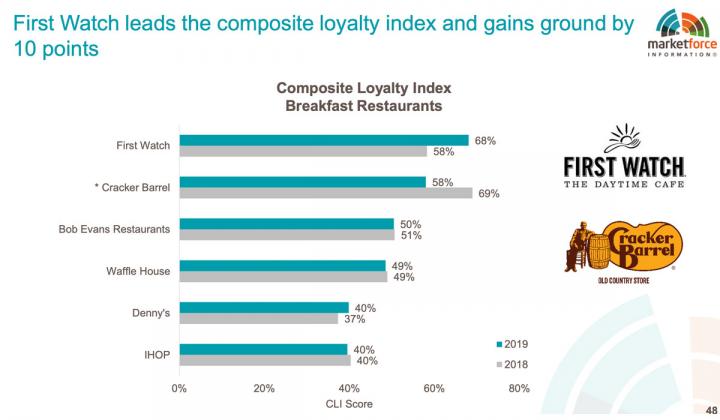 Broadly, customers are looking for pretty specific traits in breakfast chains. To the question, “thinking about your most recent visit to this breakfast restaurant, please rate the following where 1 equals not at all satisfied and 5 equals very satisfied,” here’s how it shook out.

Customers hold back the most on giving top-box ratings for those final two categories, Market Force pointed out.

It’s important to circle how service, value, and speed rise above in breakfast. As future stories exploring other categories will show, this isn’t a universal theme in full service. But it fits the early daypart. The service element is one avenue sit-down chains can separate themselves from the other breakfast options on the market. 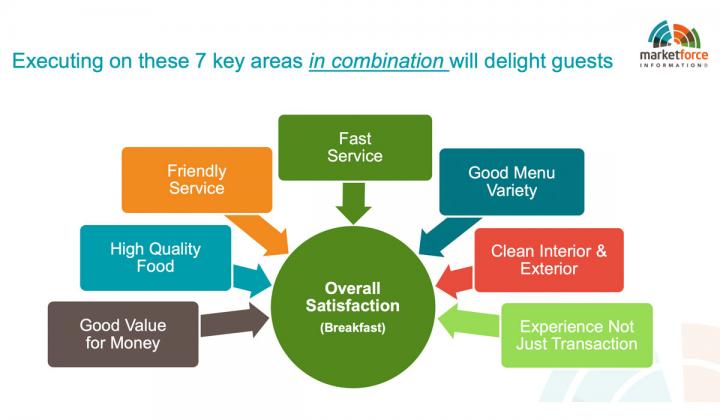 What breakfast brands need to work on

First Watch took seven of the 11 categories below, crushing the field in healthy choices and food quality. 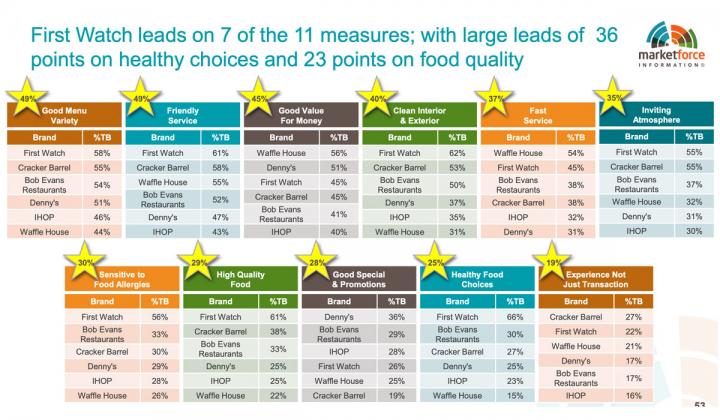 One of Market Force’s questions also dealt with problem solving in the restaurant, which can be an area of strength for chains that put stock in it.

In the breakfast category, the company found that nearly one in 10 guests experienced a problem.

The lesson there is that it helps to, one, have a designated place in the restaurant for customers to voice their issues. This way, operators can address problems before they blow up (social media). And two, educate servers and GMs on how to talk with unhappy guests. Hearing people out, more often than not, inspires loyalty and repeat visits. The opposite does, well the opposite. And once that comment hits social media there isn’t much you can do to stop the momentum.

That brings up the question, what are people complaining about? 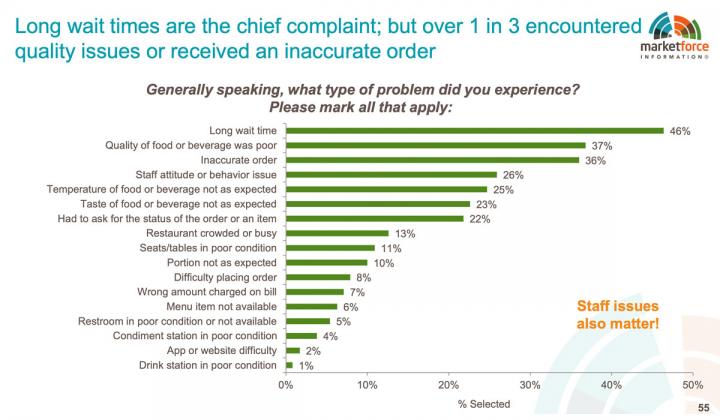 And what that means. 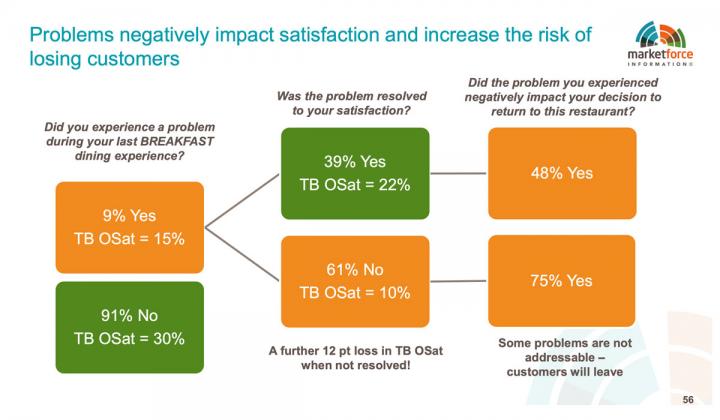 Where does delivery factor in?

Delivery remains a pretty underserved channel in breakfast. Per Market Force, just over one in 10 breakfast guests said they have used delivery. 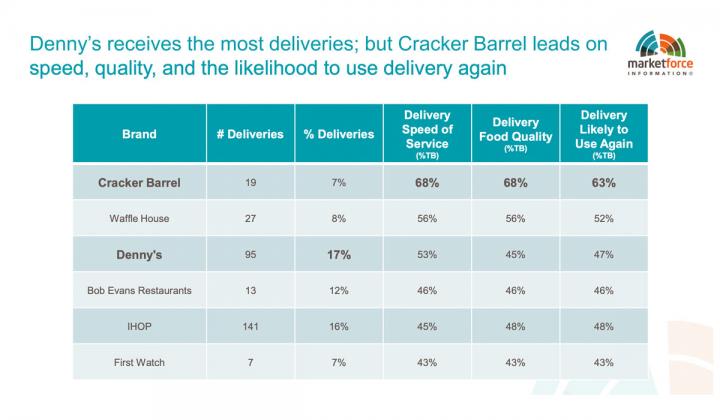 Market Force noted that about one in 10 guests reviewed breakfast restaurants before showing up. First Watch topped this field as well. Eleven percent of people said they read social media reviews before eating at the restaurant. 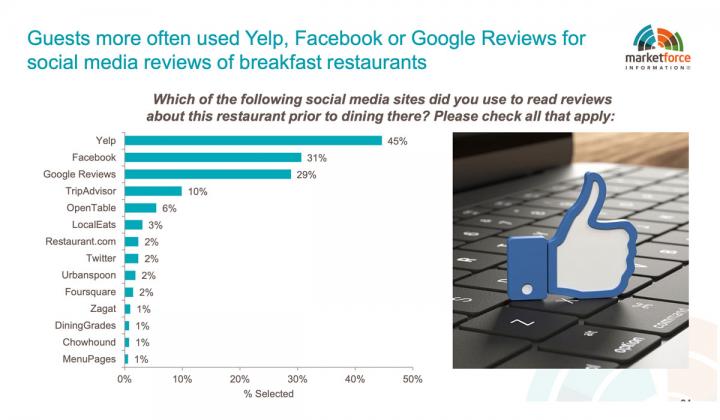 It was also noted that nearly three in four respondents didn’t know if the restaurant offered a mobile app, paving the way to drive brand awareness. Twenty-one percent said they were aware. And of those, 45 percent actually downloaded the app. It’s all about clearing the gap.

Why are people using breakfast apps? 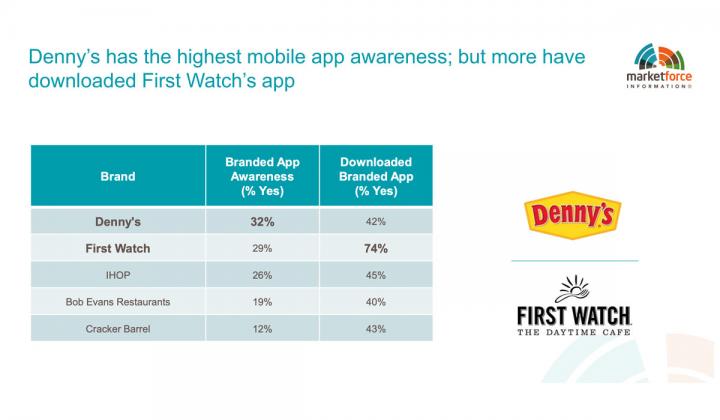 The key takeaways from this section: Good value for money, high-quality food, friendly and fast service, variety, and clean restaurants—those are the satisfaction drivers in breakfast. Start there and the rest should follow.

Coming up next time, we’ll explore the general menu category, and see where brands like Applebee’s, Chili’s, and Red Robin stack up.