In Q4, the brand offered an incentive that provided a 3-percentage point decrease in royalties for franchises that switched to 24/7.

For Denny’s, ‘More and More Appetite’ to Get Back to 24/7 Service

The chain is asking operators to expand hours and roll out virtual brands at the same time.

If you’re in hospitality, you have a good rhythm for most business developments, Denny’s CEO John Miller said.

But being asked to return to 24/7 service, manage store closures, roll out virtual brands, start on a new remodel scheme, and potentially incorporate a minimum wage increase, well that’s essentially drinking from a fire hose. But the Denny’s executive team—which has weekly and monthly calls with franchise leadership—is confident operators are up to the task.

Miller said the biggest priority today is expanding hours of operation, which makes sense since Denny’s has spent 68 years building equity in late night. In 2020, the late-night daypart mixed 16.5 percent, so there’s money to be had in the waning hours.

In Q4, the brand offered an incentive that provided a 3-percentage point decrease in royalties for franchises that switched to 24/7. As a result, the number of all-day stores increased from 458 in July to 528 in February. However, that still only represents roughly one-third of the U.S. system as 926 stores continue to have limited hours.

Looking at the hundreds of stores with limited hours, Miller said very little has to do with franchisees refusing to move to 24/7. Most of it deals with legitimate operating restrictions and the progression of building talent and capacity. That’s why instead of extending the incentive program through Q1, Denny’s choose to work directly with franchise association leadership to gain support.

“As restaurant dining rooms continue to open up, there is more and more appetite to get to 24/7,” CFO Robert Verostek said during the brand’s Q4 earnings call. “So we will work through that. And I do believe that we will be successful with regard to that. As we move forward, particularly, again, as restrictions, curfews, dining rooms could get back open, we have a high sense that we will get back to that.”

Here’s a look at how U.S. same-store sales have compared at 24/7 units versus limited-hour stores from Q2 2020 to February:

Overall, domestic comps sank 33 percent in Q4 compared to 34 percent in Q3. The fourth quarter started with declines of 26 percent and 27 percent in October and November, respectively, but the figure plummeted to 41 percent in December due to increased COVID restrictions. The loss of outdoor dining in California, which houses 377 locations, or 25 percent of Denny’s U.S. footprint, significantly fed into the damaged sales. In October, 1,289 dining rooms were open—the highest peak since the pandemic began. By December, 891 were open.

However, as states have relented in the new year, sales have recovered. In January, 927 stores had open dining rooms, leading to a 31 percent drop in comps, and in the first part of February, 1,010 were open, leading to a 25 percent slide in comps.

In the fourth quarter, 17 franchises closed their doors, bringing the year-end total to 73. Six of those shutterings were due to lease expirations while the remaining 67 had AUVs of roughly $1 million prior to COVID, which fell well short of the $1.7 million average.

President F. Mark Wolfinger noted that looking at the past five to 10 years, Denny’s has averaged around the mid-30s in annual closures, or about half of what occurred in 2020. He said the increase in shutdowns was accelerated by the pandemic and that those units would’ve closed anyway in the next few years. The executive believes the slimmed footprint will enhance the overall health of the franchise system and allow multi-unit operators to focus on their higher-performing stores.

“We believe there's a drive opportunity on this other side of this pandemic,” Wolfinger said. “I mentioned the fact that we continue to see a great deal of seats leaving the marketplace in full serve. A large portion of full-serve dining in the U.S. is independent players. And again, we don't relish or celebrate that situation that clearly creates an opportunity on the opening side, especially in the domestic business. So again, we're going to drive the opening number as we go forward.”

Denny’s finished 2020 with 1,650 stores systemwide, including 65 company-owned locations and 1,585 franchised stores. To offset the closures, 20 stores opened. The restaurant also completed 22 remodels in 2020, including five in Q4, even though the requirement was deferred until 2022.

The Heritage 2.0 prototype, which underwent extensive testing prior to the pandemic, was developed based on consumer research and features more attention-grabbing exterior elements, relaxing, neutral colors with vibrant accents, and modernized booths and community tables.

Miller said that as industry trends evolve, like curbside service, pickup windows, and enhanced to-go stations, Denny’s works to incorporate those changes along the way.

“If you're a new franchisee or a franchisee with a lot of development agreements and said, what's the latest greatest, we keep those plans fresh, we refresh those all the time,” Miller said. “And there are local store options for a number of different approaches, depending on the size parking lot, ingress and egress.”

To support it’s growing off-premises business and underutilized labor and kitchen space, Denny’s announced in January that it’s launching new virtual concepts, The Burger Den and The Melt Down.

Miller explained The Burger Den focuses on burgers “with new varieties using ingredients already in our pantry.” Tests have been positive and suggest transactions are highly incremental. More than half of U.S. locations have signed up to participate in a three-phase roll out. Miller said the first group launched earlier in February, while the other two groups expect to roll out the virtual concept by the end of Q1.

The Melt Down features “handcrafted meals with fresh ingredients” that utilize roughly 70 percent of Denny’s current pantry. Miller noted that test results have shown similarly favorable results. More than half of domestic stores are expected to debut the concept in Q2.

“We do still think it has a place, when you have capacity and family dining Sunday through Thursday after 5 and late-night capacity, and can build virtual brands with a small number of SKUs in the wheelhouse of your cooks' capacity,” Miller said. “So in our case, we're particularly good at the grill. We have large oftentimes doublewide grills in our restaurant. Cooks don't have to run down to the fryer very often for these options other than to put some French fries or onion rings in the orders. It's an opportunity for us to sell shakes, and it's also an opportunity ultimately to build brand equity by how things are revealed or discovered through time, or to add some of the favored items into the core menu at Denny’s.”

In February, Denny’s has earned $8,200 in off-premises sales per week, per restaurant, which is more than double than last year.

Here’s a look at how Denny’s average U.S. sales have progressed since the beginning of 2020: 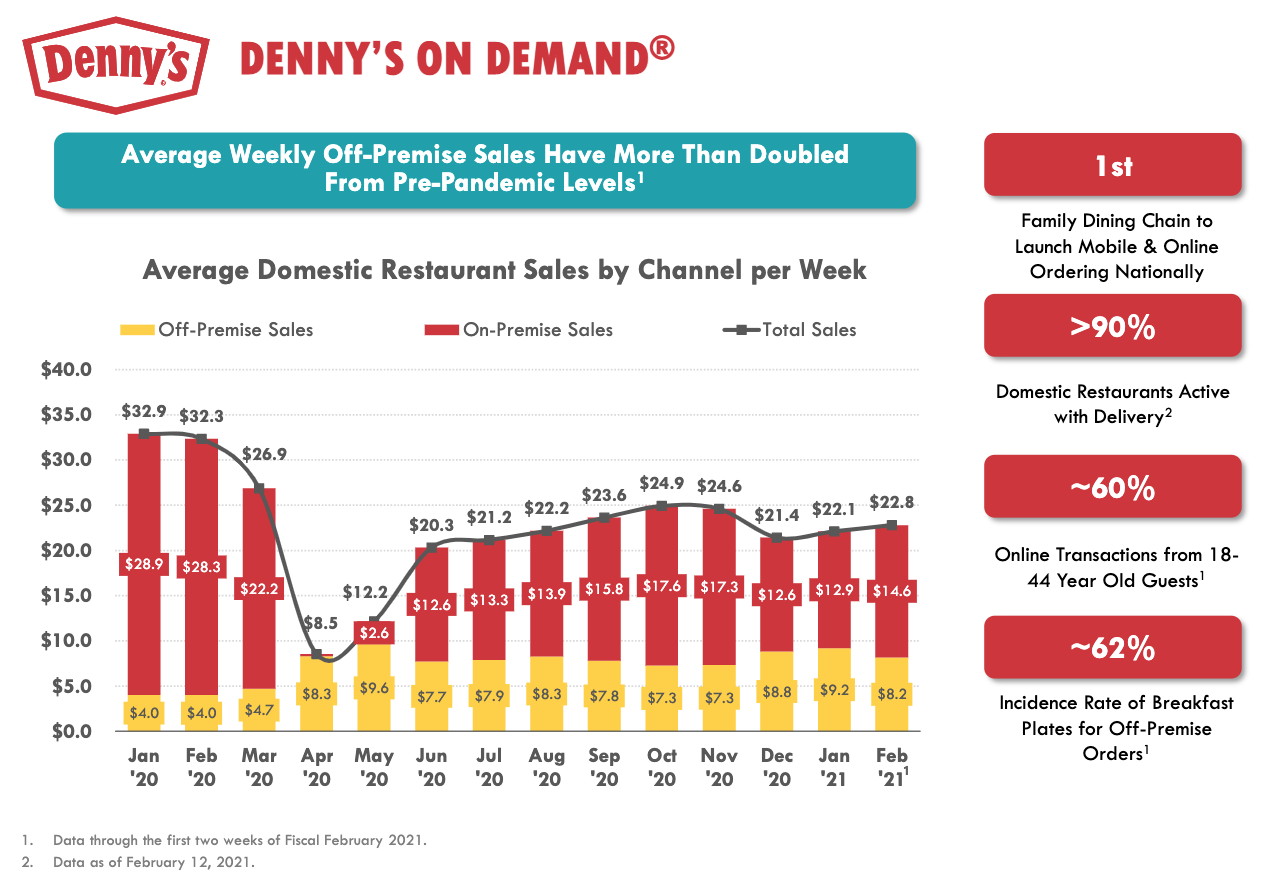 Denny’s has proof that an elevated wage can lead to improved sales results, if it’s done in a graduated manner, Verostek said.

In California, which is introducing a $15 minimum wage over time, stores have outperformed the system. During the roll out of the minimum wage increase, California units saw six straight years of positive guest traffic and sales.

But Verostek emphasized that this occurred because of the tempered approach. He also mentioned Arizona, which approved a 25 percent minimum wage increase overnight. That measure required Denny’s to take 5 percent to 7 percent pricing—a move that does have a traffic consequence. Meanwhile in California, Denny’s covered the change with 2 percent to 3 percent pricing.

Miller said that philosophically, Denny’s is a brand that supports the notion that “there’s going to be a breadwinner in every family that ought to be able to make a living wage.” The chain also recognizes that the restaurant industry also needs to have a starting wage.

"Rather than being a political lightning rod, we just are advocates for small business and good sound policy, and we always appreciate it when leadership in the state level, governor level, or Congress, senate will give us a listening ear to understand our industry, whether it be tips or wage or the pace of wage inflation,” Miller said. “So we want to be a sounding board for a reason.”