To him, it’s not about what’s already available, but the focus is more on the higher culinary standards restaurants can bring to traditional items. He used the example of Denny’s prime rib omelet, which is the highest-selling omelet despite it being the most expensive. Other innovations include the chain’s Apple Bourbon Pancake and fruit-forward crepes. On a related note, 80 percent of Denny’s core menu entrées have been improved or changed entirely since the beginning of its brand revitalization.

This becomes especially important for breakfast, in light of chains like McDonald’s introducing new chicken items or Wendy’s rolling out a national menu.

Denny’s breakfast mix has become a bigger part of its all-day menu. About 85 percent of customers order breakfast items, and the company finished Q4 with about 64 percent breakfast mix all day, up from 62 percent in Q3. More than 62 percent of off-premises orders were breakfast plates in Q4 as well.

“It's very competitive out there with a lot of fast-casual biscuit concepts being launched and tried,” Miller said during Denny’s fourth-quarter and annual review. “Some will scale, some won't make it, but in each of these offerings, it's not just what you can already get in the marketplace but a new twist on some traditional items that have been plussed up a little bit from a culinary standard. I think it gives Denny’s dining a very good place to be—this renaissance we've been talking about where people would just want really good mom’s cooking with a twist and maybe something they wouldn't have been able to prepare home.”

The push for innovation comes amid consistent sales growth. System-wide domestic same-store sales rose 2 percent in 2019 at the 1,559-unit brand (domestic), the chain’s ninth straight year of growth. That’s up from 0.8 percent growth in 2018. Company restaurants grew 1.9 percent year-over-year while domestic franchised units saw a 2 percent uptick. In Q4, system-wide domestic comps rose 1.7 percent. That breaks out to a 1.8 percent jump for domestic franchised restaurants and a 0.5 percent bump for company locations. The company expects domestic system-wide comp growth between flat and 2 percent in 2020.

Average-unit volumes have steadily increased for both franchises and corporate locations, too. Company stores ended 2019 with an AUV of $2.48 million while franchises held an AUV of $1.67 million. From 2011 to 2018, company and franchised restaurant AUVs saw an annual growth rate of 3 and 2 percent, respectively. The company figure was $1.8 million in 2011.

Denny's remodel program continues to roll out across the system.

Dine-in traffic still reigns supreme, but Miller noted that since the launch of Denny’s revamped app, Denny’s on Demand, off-premises sales have grown from 7 to 12 percent. Roughly 89 percent of domestic stores have at least one delivery partner. Those purchases are skewed toward a younger customer in the late-night and dinner dayparts.

The innovation extends beyond the menu to the four walls of each unit. By year’s end, roughly 89 percent of stores had the Heritage image, a process that began in 2014 and has yielded a mid-single-digit sales lift. Miller said Denny’s is now ready to move to Heritage 2.0, a remodel that will feature “more attention-grabbing exterior elements, relaxing neutral colors with vibrant accents, modernized booths and community tables.” The new branding is in 34 restaurants and the costs have ranged from $150,000 to $300,000. Similar to its predecessor, Heritage 2.0 is yielding mid-single-digit sales increases, Miller said.

“And some color schemes, I think, if you get too primary, they become dated,” Miller said. “The colors just become dated every seven or eight, 10 years. But on the exterior, there are more enhancements through 2.0 this time around, so that's where a lot of the enthusiasm and excitement is coming from.”

Looking at the bigger picture, Denny’s has spent more than a year handing over hundreds of keys to franchisees, and that strategy is nearing an effective close—a successful one, if you ask Miller.

The chain sold nine restaurants in Q4, pushing the total to 113 since the refranchising and development announcement in Q4 of 2018. By the end of 2019, four units were marked for sale, and Miller is confident those will be sold soon. The process is expected to result in savings of $11 million to $13 million from corporate support, field support, and franchise support cost sharing. Denny’s has moved from a 90 percent franchised business to about 96 percent. 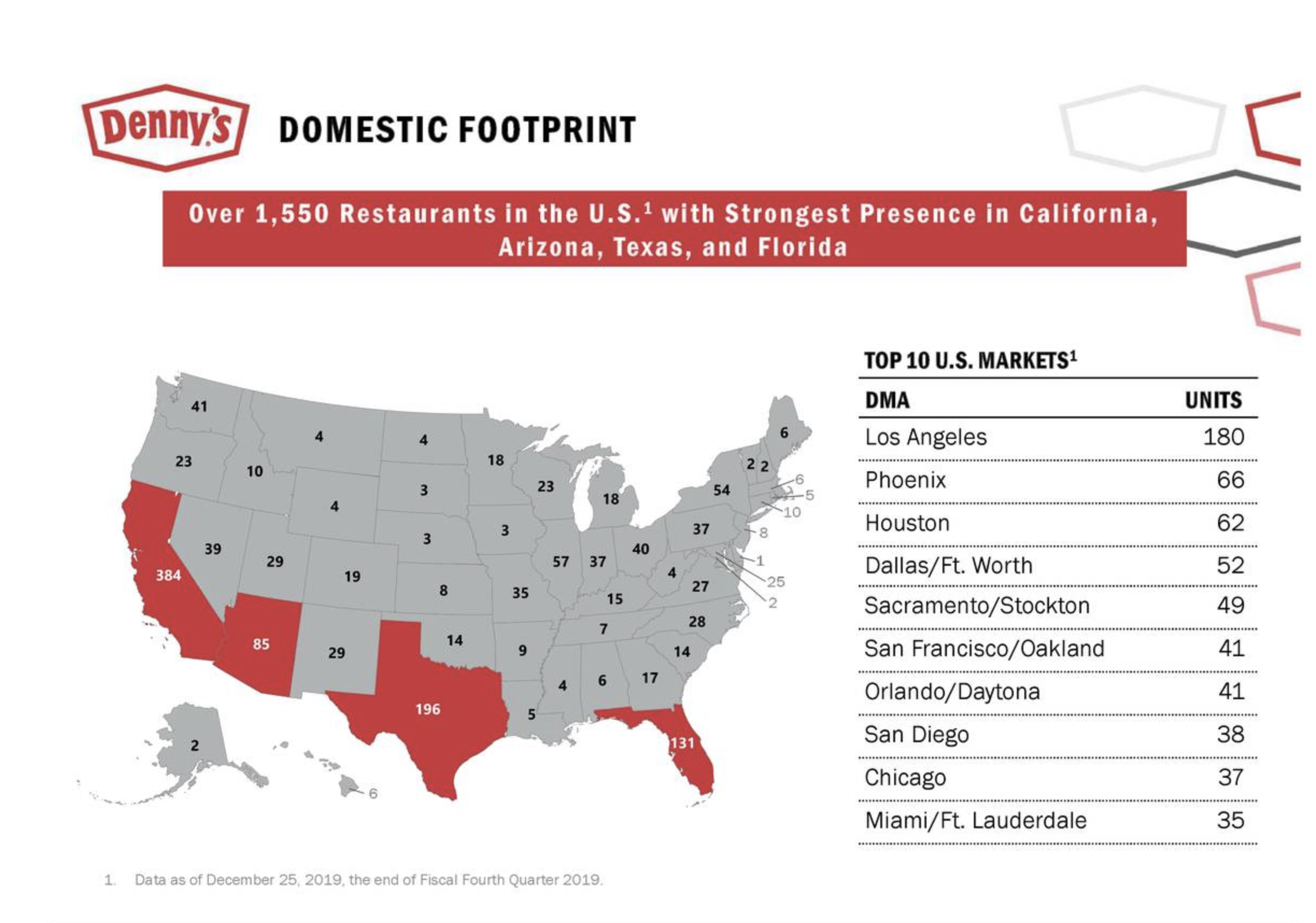 “In addition to investing in our brand, our long-standing internal review process continues to actively consider multiple alternative uses of cash,” Miller said. “This practice is thorough and comprehensive with a full array of considerations from evaluating the acquisition of another concept to acquisitions for conversion, like our Flying J transaction earlier in the decade, considering a dividend to our ongoing share repurchase program, each with new consideration to accretion and risk. We balance these various considerations with our leverage philosophy and more recently, proceeds from the refranchising transactions.”

The refranchising initiative has also led to commitments to develop 78 new domestic restaurants. Those are expected to start opening in 2021. Combined with international agreements, the global development pipeline has expanded by almost 130 restaurants.

The refranchising coincides with the chain’s real estate strategy. Denny’s anticipates about $30 million from the sale of between 25 and 30 percent of the 95 properties it owned at the start of the strategy. The proceeds will be used to purchase higher quality property. In Q4, Denny’s bought one property for roughly $1.9 million. In total, the chain has sold six pieces of real estate and bought five via a series of like-kind exchanges totaling about $11 million.

Denny’s ended the year with 1,635 franchised locations and 68 company locations for a total of 1,703 units worldwide. Fourteen international units opened in 2019, which is the largest global expansion in Denny’s history. Since 2011, 380 new restaurants—74 international— have opened. The chain projects 30 to 40 new restaurant openings in 2020, with a system change between five net closings and five net openings.