An updated system allows for easier customer engagement and activation.

Chili’s parent company, Brinker International, prides itself on being one of the first major brands to use tabletop technology, and the past few months have been spent updating those resources to enhance its value proposition and improve operating efficiencies and engagement with its loyalty program.

Wyman Roberts, CEO and president of Brinker, said the upgraded system allows units to leverage customer payment and real-time feedback and bring forth marketing advantages like direct logins to make it easier for customers to participate in rewards programs. The technology also offers other features like near-field communication, which creates a more personal marketing relationship, Roberts said—a far cry from the old days of mass, discount-based messaging.

The technology has the capacity for more automation as well, where the restaurants can communicate with customers without the necessity of a login. Chili’s said it improved its marketing returns with loyalty members by offering targeted promotions tied to individual purchase behavior. The loyalty database includes 7.2 million active members as of December 25.

“And those are the kind of things that we're going to continue to push forth as we aggressively grow our database,” Roberts said during the company’s second-quarter review. “So we are right now pushing and growing the database at a nice clip. We will continue to grow that and see that as a really competitive advantage to us in the future as we are getting smarter and smarter about how to use that database to market to individual consumers in unique ways that drives incrementality.”

The news comes as Chili’s reported same-store sales gains of 2 percent at company-owned stores in Q2, the seventh consecutive period of positive growth (1,060 of Chili’s 1,240 U.S. restaurants are corporate). It gives the brand a two-year stack of 4.9 percent. Chili’s franchised restaurants experienced a 0.4 percent dip in same-store sales. And the chain is on pace for a productive Q3 as well. Joseph Taylor, Brinker’s executive vice president and CFO, said Chili’s net comp sales quarter-to-date are above 4 percent.

Ten stores opened in the quarter, including the first in Vietnam. Chili’s has 382 international locations to give it 1,675 total. Maggiano’s, which has 53 U.S. restaurants, saw its same-store sales decline 1.4 percent after rising 1.8 percent in the year-ago period. Traffic fell 2.8 percent versus 1.3 percent growth last year.

Brinker reported adjusted earnings per share of $1.01 and quarterly revenues of $847.5 million, an 11 percent year-over-year improvement. Revenues at Chili’s totaled $728.4 million in Q2, up 13.7 percent. The gain was primarily driven by off-premises growth and the September acquisition of 116 locations from 14-year franchisee, ERJ Dining.

Here’s a look at domestic same-store sales trends for Chili’s:

And traffic (at company stores)

Roberts noted off-premises was the primary sales driver for Chili’s, with takeout, third party delivery, and delivery options on its app and website. This was the eighth straight quarter in which Chili’s outperformed the category in traffic, he said. 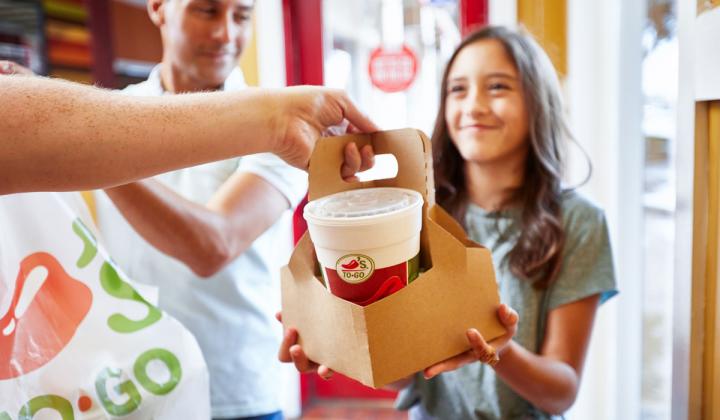 “We're really pleased with this trend as it demonstrates our ability to meet the consumers' increasing needs for convenience, value, and consistency at a level matched by few other brands,” Wyman said.

For Brinker overall, off-premises sales grew more than 31 percent, year-over-year, and it now represents roughly 17 percent of total sales. Delivery accounted for 4 percent. For Chili’s specifically, delivery mixed closer to 5 percent of the total. Roberts doesn’t anticipate Chili’s handling deliveries in-house—instead, the key going forward is working with DoorDash to leverage marketing opportunities for in-restaurant and out-of-restaurant experiences. Much of it has to do with, Roberts noted, how they partner on databases and building each other’s business through strength of scale.

As far as the actual product, Roberts said, remaining focused on core menu items continues to be critical for Chili’s, a brand that slashed its menu by 40 percent back in 2017. The CEO doesn’t want to get caught up in what he called an “arms race” for new items and fresh initiatives. The brand committed to only bring changes where it makes a difference and when consumers are excited about it, as opposed to chasing short-term trends or trying to provide an item that a small demographic may like for a short period.

“We are totally on board with focus does make a difference,” Roberts said. “And we're seeing that again as, I mentioned, in all of our results. It also allows you to be a little more efficient, because people have that muscle memory. … We continue to not chase. We continue to want to run our race, put the value and the innovation and the consistency and quality components together for our restaurants and our operators to deliver to our guests on a day in, day out basis.”

Roberts said the main strategy is to continually improve the quality of the experience—atmosphere, service, or food. The Brinker leader added that constant work is being done in the culinary center to develop ideas on how to improve products. He used the example of the chicken sandwich, which was upgraded in the first half of fiscal 2020.

“Now, does it turn the business around overnight or might have a huge impact immediately? No,” Roberts said. “Over the long haul, we're seeing that impact, and it's all showing up in better guest satisfaction metrics, right? So our food scores that our guests give us are at all-time highs. And we continue to see that happen because of the changes in the menu as well as our operators executing more consistently to standards. … We absolutely are not looking at any opportunities to save costs and reduce the quality of the product.”