The Cheesecake Factory is a different looking company these days.

And accelerated growth is on the table for 2020.

While The Cheesecake Factory’s foray into off-premises, delivery in particular, has served as a testing ground of sorts, the company’s latest initiative is taking place within its four walls. But it does share a convenience focus.

The polished chain revealed Wednesday to investors that it recently rolled out limited reservations at all 206 locations nationwide. President David Gordon called long wait times “one of the biggest hurdles for our guests,” and said it hoped the change would encourage time-sensitive diners to reevaluate the brand. This is a particularly sharp challenge given The Cheesecake Factory’s heavy mall footprint and spontaneous traffic that often accompanies it. For instance, a couple planning to grab dinner before a movie might be undecided in the parking lot. One look at The Cheesecake Factory’s crowded lobby, though, and they’re headed elsewhere. Offering reservations opens a planning element for consumers that didn’t exist before.

The chain launched this effort nationally “just a few weeks ago,” Gordon said. It’s been limited so for to enable operators to effectively manage throughput.

“It's not that you can maximize every seat in the restaurant with reservations every day of the week,” he said. “So, every time slot throughout the week, we've allocated a certain amount of tables to be available for reservations, and at the same time, let guests know that they can always walk in, so that they're not under the impression that we're only taking reservations.”

Currently, the system runs through Yelp, where The Cheesecake Factory is also marketing the feature. Guests can go online to the chain’s site as well and see reservations as an option.

The functionality on Yelp is a one-click process.

Matthew Clark, The Cheesecake Factory’s CFO, said reservations are “something different for us and I think an opportunity.”

“We run really, really busy restaurants,” he said. “And our objective is to get a little bit faster all of the time. I think, right now, we're focused on digesting the limited reservation. That's a pretty big thing for us. We'll see how that does. And we want to make sure that the guest experience is not impacted, other than positively for that.”

The news came as The Cheesecake Factory shared Q4 and full-year results that reflected a changing business. Total revenues clocked in at $694 million for the three-month period that ended December 31, up from $585.2 million in the year-ago measure. Net income was $48.7 million.

Same-store sales at The Cheesecake Factory increased 0.6 percent compared to a 1.9 percent lift in Q4 2018. The comp comprised of 3.2 percent pricing, positive mix of 1.2 percent, and traffic serving as the delta. 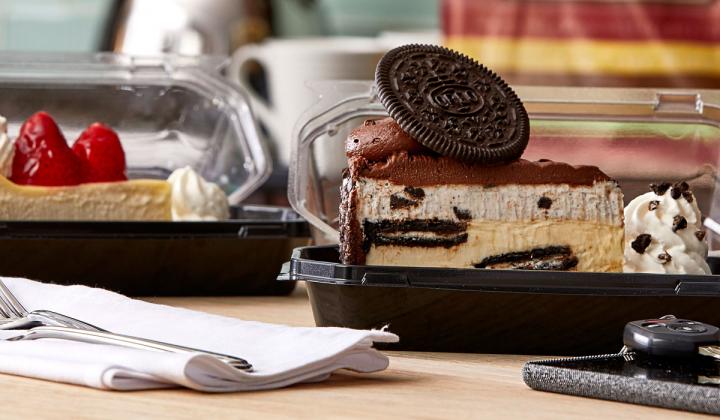 Off-premises mixed 17 percent of The Cheesecake Factory's business in Q4.

The big financial change, however, flowed from the company’s blockbuster acquisitions in 2019, where it brought in North Italia and Fox Restaurant Concepts for $353 million. The Cheesecake Factory had already invested $88 million in FRC for a stake in North Italia and Flower Child and then proceeded to invest another $88 million ahead of the purchase.

In Q4, revenue contribution from North Italia and FRC, including same-store sales growth of 4 percent at the first, as well as roughly $90,000 in sales per operating rate at FRC, totaled $92 million. If you add in $19.3 million from external bakery sales, you get to the $694 million figure.

And this is only going to expand as The Cheesecake Factory turns up the growth dial in 2020. The company opened three namesake restaurants in 2019, a North Italia, and two Flower Child fast casuals (six Cheesecakes also opened internationally under licensing agreements).

This coming fiscal year, though, the company expects to accelerate to as many as 20 restaurants, CEO David Overton said. That includes six Cheesecakes, six North Italia locations, and eight restaurants within the FRC subsidiary, which now includes four Flower Child locations thanks to a calendar shift of one holdover opening. Four more international stores should support the company’s planned 8 percent total revenue growth objective for 2020.

Gordon added the integration of North Italia specifically, which many point as the growth lever in the deal, has progressed smoothly. In fact, he said, the company saw manager and staff retention increase following close.

North Italia and FRC are expected to contribute about $425 million in revenue in 2020. North Italia is averaging roughly $126,000 in weekly sales.

In terms of growth, Clark said North Italia and FRC, while they could work in malls, “it won’t be a focus.”

“We'll definitely want to be in more of a variety of places, and that will kind of help us with the ebbs and flows of real estate over time,” he said.

Clark elaborated a bit on The Cheesecake Factory’s mall experience, too, and how that dynamic is changing amid a shifting retail dynamic. Many centers across the country are repurposing their footprint away from retail and toward restaurants and experience.

“I think, most importantly, what we've seen is that there are folks out there who continue to be excited about the brand and sharing the affinity and love for Cheesecake Factory with these different products, and we continue to see growth in just about every sector," says president David Gordon of an upcoming ice cream retail launch.

Clark said The Cheesecake Factory is “probably 75 percent through,” that cycle of change, meaning another two or three years remain. “And the good news is that the ones that they are refurbishing and changing out, they do happen to be where The Cheesecake Factories are because they're the best locations, right? So the concentration of entertainment around us will benefit us in the long term,” he said.

“And there's certainly some pain right now, and that's part of what we're going through in any given location. And a lot of times, it's not even just the fact that they're putting in new restaurants. It's just a construction process,” Clark added. “And you might have a parking lot across the street from a Cheesecake Factory one day and the next month, it's basically a construction site, and they're building a whole new parking ramp, for example.”

He added it’s not all bad news; it’s just a process, and a concentration of options is a positive for consumers in general. Ultimately, it comes down to A-plus real estate and how these sites are better equipped to weather preference changes.

The Cheesecake Factory was named—for the seventh consecutive year—to Fortune’s 100 Best Companies to Work For list. It came in at No. 12. Only Kimpton Hotel & Restaurants (No. 10) and Wegmans (No. 3) ranked higher in the foodservice space. No other restaurant chain cracked the 100. The Cheesecake Factory was No. 25 in 2019, No. 27 in 2018, No. 48 in 2017, and No. 98 in 2016. So it’s been climbing, which is an impressive feat given the challenges at hand today with a tight labor market and rising wages, especially in the concept’s home state of California. 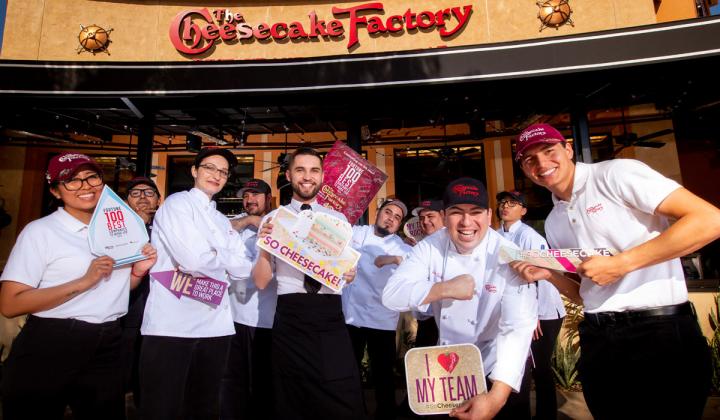 The Cheesecake Factory continues to climb in workplace ratings.

Overton said the brand’s labor management has been a particular strength lately. Labor was 36.2 percent of revenues in Q4, an increase of 40 basis points from last year. The rise, primarily, due to higher hourly wage rates.

Clark said wage management was close to 5 percent in the period versus the 5.5 percent the company had been seeing. “Overtime management was solid all year,” he said. “And this is just about good operations and good systems and practices, right? So we're just continuing to refine our ability to track and manage those key pieces, and making sure that we're not paying more—about the right amount for talent, not overpaying with overtime, and keeping people, because that helps manage the training and all the costs associated with bringing somebody else on board.”

Clark said focusing on forecasting and staffing remains an underappreciated unlock in a lot of restaurant circles. That extra 0.5 to 1 percent of wage inflation or overtime is really the difference between being at 6 or 5 percent wage inflation, he said. “And I think it's just continuing to get better versus trying to introduce something where we're taking out a significant amount of labor. That's never been our focus,” he said.

Off-premises represented 17 percent of sales for The Cheesecake Factory in Q4. Thirty-five percent of that was delivery, 13 percent online ordering, and walk-in was roughly about 50 percent. 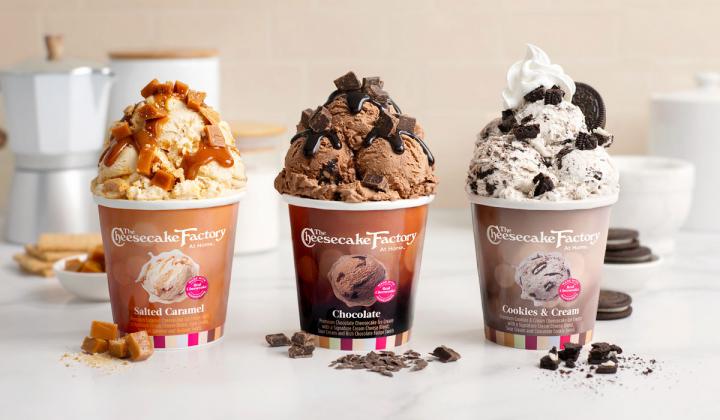 Gordon said the brand plans to test a variety of additional marketing levers in 2020 as it looks to increase unaided awareness and further lean into convenience. “Specifically, we were encouraged by the initial results of the TV campaign we ran last year and are planning to do another test later this year,” he said.

Gordon added The Cheesecake Factory is still evaluating what the marketing is going to look like, but expect additional TV spots.

On February 18, the company announced it launched a collection of premium cheesecake ice cream, with a signature cream cheese blend and sour cream, in seven flavors across grocers nationwide.

Gordon said the brand generated more than 600 million media impressions from a People Magazine store earlier in the week. The product is expected to be available at the end of the month and into early March with a broad set of retailers representing thousands of doors, including Kroger, Albertsons, Safeway, and Target, Gordon said.

“I think, most importantly, what we've seen is that there are folks out there who continue to be excited about the brand and sharing the affinity and love for Cheesecake Factory with these different products, and we continue to see growth in just about every sector. And the ice cream, I think, is ingenious and different and innovative, which is what we are at Cheesecake Factory,” he said. “So we're excited to get that launched. We think that there'll be great demand for it.”