CEO: Texas Roadhouse Will Keep Delivering on its Promise

As costs rise and a potential recession looms, the chain will keep serving hot steaks and a legendary experience.

Thanks to dine-in closures, the pandemic’s impact on restaurants always felt closer to a disaster event than a recession. However, today’s climate paints a different backdrop. The annual inflation rate in the U.S. accelerated to 8.5 percent in March, the highest since December 1981. The cost of food hiked 8.8 percent, year-over-year—a rate not witnessed since May 1981. Food-away-from-home upped 6.9 percent and full-service restaurant prices rose 8 percent, outpacing quick service (7.2 percent).

Financial services company Rabobank said disposable income, to date, has been undermined as inflation races ahead of revenue growth, which historically hits low-income households hardest. But short-term, it’s been shielded by “pent-up demand,” low unemployment, and accumulated savings. Will these dynamics hold? Rabobank isn’t so sure. Back in 2009, quick-serves outperformed when The Great Recession spread, either by increasing sales as other formats contracted, or by contracting less than the total field. Mostly, though, it was a kickback from guests trading down.

Service Management Group connected with more than 11,000 U.S. consumers to get a feel for how the economy is impacting habits. Compared to the past 12 months, one in three retail consumers predicted their financial situation would worsen in the coming year. And in response, 59 percent expected to reduce the number of times they eat out, while nearly one in three planned to increase spending on groceries.

Respondents with lower household incomes ($55,000 or less) were most likely to cut back.

Back-of-house platform MarketMan ran a 1,500-person survey on the topic as well. It found 74 percent of polled consumers felt restaurants would cut portion sizes while charging the same price in a bid to save—the so-called “shrinkflation” tactic. And 66 percent figured restaurants would switch to cheaper ingredients without notifying guests.

Texas Roadhouse CEO Jerry Morgan was asked about these developments Thursday. How does he expect the consumer to navigate cost pressures and yet continue to choose Texas Roadhouse?

Morgan’s answer traced to 2008. Then, Texas Roadhouse took a stance, as it often does, contrary to what unfolded around it. The brand didn’t trim portions and instead leaned into quality and consistency, as well as deciding it was worth paying up to staff restaurants. A long-view, oasis approach to a downturn. “When we look back and discuss,” Morgan said, “how do you get through difficult times? You deliver on your promise. And I think we are committed to that.”

In the same MarketMan study, 75 percent of respondents said rising prices would lead to them sticking with restaurants they’re familiar with versus trying somewhere new.

Or to Morgan’s point, they’ll keep going to brands that don't let them down. “We are going to continue to put every portion that we have on that plate, our heaping sides, our smoking hot steaks,” he said. “And just everything that we do. We believe that's what will carry us through, because we don't know how difficult it's going to be.”

“But what we want the consumer to rely on is our ability to consistently deliver on what they want when they come in that door,” he added. “So that's really what we can live on; is just do the best that we can at what we do.”

With more recent trends, Texas Roadhouse a few weeks ago took a 3.2 percent menu price bump. Morgan said there’s been no tangible mix or traffic pushback. “That said, we know the consumer is feeling inflationary pressures, so we are closely monitoring spending patterns,” he said. “But at the end of the day, we are confident with our positioning in the market and our ability to provide unmatched value to our guest.”

Consumers simply haven’t been deterred from dining at Texas Roadhouse. The brand continues to surge ahead on the top-line, with Q1 same-store sales climbing 16 percent at company restaurants (20.4 percent at domestic franchises) against a year-ago lap of 18.5 percent.

"What we want the consumer to rely on is our ability to consistently deliver on what they want when they come in that door,” says CEO Jerry Morgan.

So what’s happening today is easy to crunch: One, surging side of the business (to-go) remains elevated from 2019 marks at about $19,500 per week in Q1; and Texas Roadhouse’s historic anchor (dine-in) grew each month of the quarter. In April, guest counts actually surpassed 2019 levels, CFO Tonya Robinson said.

Restaurant margin, as a percentage of restaurant and other sales, decreased 213 basis points to 16.4 percent thanks to commodity inflation of 17 percent (higher protein costs was the main culprit). Restaurant margin dollars climbed 9.2 percent to $161.2 million from $147.6 million in the prior year.

Wage and other inflation for Q1 came in above Texas Roadhouse’s full-year forecast of 7 percent due to lower wages that didn’t materially increase until Q2 of last year. Labor as a percentage of total sales increased 35 basis points to 32.8 percent, year-over-year, while labor dollars per store week lifted 17 percent. This increase in labor dollars per store week was powered by wage and other labor inflation of 10.5 percent and growth in hours of 7.3 percent.

The company estimates commodity cost inflation of 12–14 percent for the year. 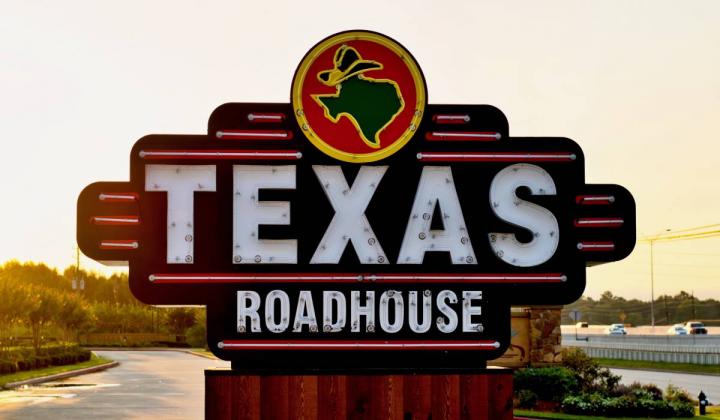 The present picture, and a tech rush

Q2 is off to a humming start for Texas Roadhouse, with comps in the opening five weeks up 9.3 percent versus last year, a period when dining rooms reopened in full. Average weekly sales clocked in at $135,000 (to-go of about $18,000, or 13.3 percent of total sales). Off-premises is sliding in light of dine-in, but the gap is being more than covered, Robinson said.

Delivering experience inside Texas Roadhouse has become ever-critical, however, Morgan said. First, it was a matter of welcoming guests back to an experience they missed, yet also needed to feel safe with. Now? You can add “measuring up to the extra cost” to the task list.

A forerunner, potentially, of why Texas Roadhouse’s approach is working is the fact there’s been little evidence of a trade down. In Q1 guests kept ordering higher-priced entrees, as Robinson noted.

There are a few back-end ways Texas Roadhouse is addressing the bigger picture, beyond holding firm to past principles. One is technology, where Morgan said the goal is to enhance guest experience while driving greater efficiencies up and down the P&L.

Some examples include “Roadhouse Pay,” a new kitchen display system, and an app the company is working on for its fast casual Jaggers, complete with loyalty.

The first initiative was announced in March when on-premises digital ordering and payments platform Ziosk entered into an agreement with Texas Roadhouse to bring its Cloud Commerce program to U.S. stores. Texas Roadhouse deploys the company’s “Ziosk Mini,” which is a portrait version of the tabletop tablet, to allow guests to pay at the table. The system can also conduct surveys and enable order entry, although Texas Roadhouse is focusing on payment.

In tests, the brand said 83 percent of dining room guests paid their check with “Roadhouse Pay,” with some stores seeing adoption rates as high as 95 percent. Of those, 47 percent were NFC transactions as guests used either tap to pay with mobile wallet or an NFC enabled credit card. More than four of five customers rated their overall experience as “excellent,” the company added.

Robinson said the service is piloting in about 100 locations today. The goal is to cover the 500-unit plus (currently, there are 536 corporate and 63 franchised Texas Roadhouse in the U.S.) system by year’s end.

Additionally, Texas Roadhouse trialed handheld ordering technology for servers. Robinson said that’s “doing a little bit slower.” The KDS launched in one new restaurant and will implement into an existing store later in 2022.

More broadly, the notion COVID cleared barriers to tech adoption has been clear at Texas Roadhouse. Its mobile app was downloaded more than 3.7 million times since the beginning of the 2021. In turn, roughly 70 percent of the chain’s current to-go business is digital—a major help versus phones ringing throughout peak shifts.

Also, “many more” guests started to use the platform’s waitlist function, Morgan said. Robinson noted its “definitely” proven beneficial for sales. When guests show up, they know they’ll be seated within 15 or 20 minutes.

Interestingly, though, the function of Texas Roadhouse being able to suggest times led to early dining occasions picking up and the brand better filling shoulder periods. “Power hours,” or between 6 and 8 p.m., climbed, too. “Those power hours are really about execution and being able to get the folks in, the experience that they're craving, and then get them moving on down the road, I guess,” Morgan said. “But on the same token in that last night hour, maybe even extending a little bit there. But it really comes down to us executing in the power hours and then really trying to drive some folks to the earlier hours and that last hour being able to hold and get that execution piece.”

“I think that's just the dynamic we're probably going to live with for a little while,” she said. “Staffing has gotten better, but the training costs, things like that, will probably stay up a little bit as we continue. We're very focused on the turnover as far as providing good training to our employees’ development, holding on to them past 90 days, which tends to sometimes be kind of the point that they leave.”

Three company restaurants and two international franchises opened in the quarter. Texas Roadhouse plans to open about 25 stores this year, and will continue targeting smaller markets where returns have been healthy in recent openings.

“Ashland, Kentucky, it's one of our highest volume stores forever in a town of 40,000 people,” Morgan said. “But they come from all over just because of that reputation. So maybe Ashland taught us 28 years ago that we could go to small towns as long as we execute and deliver on our promise of legendary food and legendary service, they will come find us.”