The casual-dining giant has a plan to save $40 million over the next two years.

Three months after announcing the exploration of strategic alternatives, Bloomin’ Brands is not ready to sell—at least not yet.

Since that announcement in November, CEO David Deno said management worked with the board of directors and financial legal advisers to evaluate options, including analysis of all aspects of operation.

He added Tuesday during a conference call that “nothing compelling has materialized in terms of an outright sale of this company.” Deno did note the brand is engaged in discussions about the possible sale of its business in Brazil, which includes Outback Steakhouse and Abbraccio Cucina Italiana restaurants.

“If something comes our way, we’ll obviously update everybody. But we aren’t complete, shall we say,” Deno said as Bloomin’s discussed its annual and fourth-quarter review.

Amid discussions about whether to sell, Bloomin’ formed a strategic plan to accelerate growth and change itself into what Deno called an “operation-centric company that can thrive in the public marketplace.”

Bloomin’ anticipates the plan will result in costs savings of $40 million in 2020 and 2021 ($20 million each year). Chris Meyer, chief financial officer, said the benefits from the savings will increase profitability while improving efficiencies and decision-making. The first chunk will be realized over Q2 to Q4 of fiscal 2020.

The first part of that strategic plan was unveiled last week with the restructuring of leadership. Jeff Carcara and Michael Kappitt, EVPs of Bonefish Grill and Carrabba’s Italian Grill, respectively, departed the company. Gregg Scarlett, president of Outback since July 2016, was promoted to chief operating officer of casual dining restaurants and will oversee all three chains. Brett Patterson, Outback’s group vice president of operations, replaced Scarlett as Outback’s president.

“Organizing Outback, Bonefish, and Carrabba’s under our casual dining portfolio will allow us to improve operations and leverage expertise between these three brands while still providing a differentiated guest experience within each concept,” Deno said. “Given his success at Outback, there is no one better than Greg to lead these brands moving forward.” 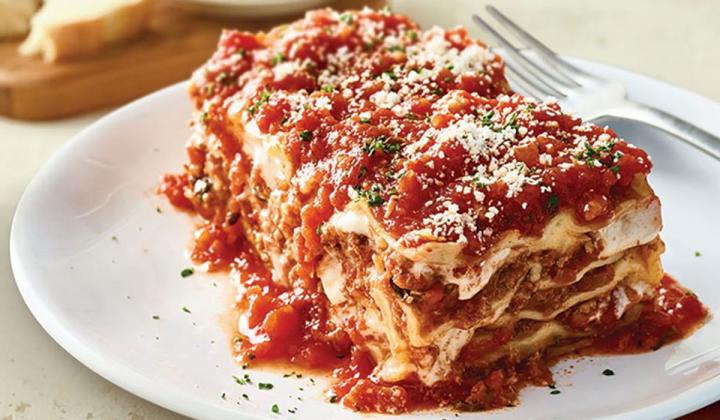 Carrabba's (above) and Bonefish made executive changes earlier in February.

The second phase of the plan includes a reduction of infrastructure costs thanks in large part to investments in digitization and automation. The third is a rebalanced approach to allocation of free cash flow, including doubling the dividend while having flexibility to pay debt, repurchase shares, and reinvest in the brand.

“Regardless of the outcome of the strategic review, one thing is clear: Bloomin’ Brands will be a transformed company,” Deno said.

The search for alternatives rages on with a backdrop of consistent figures for Bloomin’s flagship brand, Outback. In Q4, same-store sales at company-owned domestic units grew 2.7 percent (579 locations), the 12th straight quarter of positive comps. In 2019, domestic comp sales at corporate stores increased by 2 percent. U.S. traffic dipped 0.7 percent in 2019 and rose by 0.6 percent in the fourth quarter. Average check grew by 2.1 and 2.7 percent in Q4 and the full year, respectively. Bloomin’ oversees 724 domestic Outback restaurants, 145 of them franchised.

“The market remains underpenetrated and the future growth potential of this business is tremendous,” Deno said.

Bloomin’ ended 2019 with $4.1 billion in revenue and $1.02 billion in Q4, both slight year-over-year increases. Seven restaurants opened in Q4, five of them internationally.

“Overall, this was a very good year for our company,” Deno said. “We built on the platform and investments that were implemented over the last several years to improve execution in our restaurants and allow new growth opportunities across the portfolio. None of this would be possible without the dedication and commitment of our over 90,000 team members.”

The top objective going forward, Deno said, is to maintain sales across the company, particularly at Outback. In the past three years, Bloomin’ has invested more than $50 million in food quality and portion enhancements, service and labor investments, and efforts to reduce complexity in the restaurants.

Another priority is taking advantage of the growth in off-premises sales. After the launch of DoorDash in the fall, off-premises hiked 20 percent year-over-year at Outback in Q4 and now accounts for 15 percent of sales. Carrabba’s saw 32-percent growth in Q4; off-premises is 21 percent of sales at the concept. Deno said the off-premises business is proving to be incremental and management has seen little cannibalization to its own delivery network.

Bloomin’ plans to open 25 new locations (mostly in Brazil), accelerate the growth of new Outback restaurants, relocate nine units, and start a new round of interior remodels at Outback stores.

U.S. comp sales are expected to grow between 1 percent and 1.5 percent in 2020, driven by a 1 percent increase in average check, investments in the customer experience, and growth in off-premises sales.

“We feel good about both the fourth quarter results and where we finished 2019,” Meyer said. “The domestic business is on strong footing and our Brazilian business is performing at an extremely high level.”