As of Thursday, 144 restaurants have open dining rooms and 65 can only serve outdoors

Average weekly sales per unit have risen $14,000 since December.

It only made sense for BJ’s to begin testing Slo Roast, its new virtual concept.

BJ’s has recently averaged roughly $28,000 in off-premises sales per restaurant, per week, which is still more than double pre-COVID sales. More than 80 percent of those orders are placed through digital channels as well.

Even as dine-in returns, BJ’s expects sales outside the four walls to remain elevated compared to what they were before the pandemic began. Slo Roast, which features BJ’s slow roast and other protein-centric products, is just another way to leverage the growing channel.

The chain began testing the concept in Q4. It was expanded to 13 kitchens in January. Sales have steadily risen week over week and guest ratings are averaging 4.8 out of 5 stars. CEO Greg Trojan explained BJ’s is approaching its virtual concept differently than others in that it’s engineering the brand based on the kitchen first, as opposed to demands from the consumer.

“And by that, I mean, we're minimizing disruption in the kitchen first and seeing if that will sell —versus what do we think is the optimal guest menu, etc.—and protecting our kitchens, first and foremost, if that makes sense, so that we don't end up impacting the productivity and efficiency of our kitchens and impacting capacity even more,” Trojan said Thursday during the brand’s Q4 earnings call. “So our point of view is, look, we're not going to do this if we start impacting kitchens in a way that's disproportionate to the volume. And we'll see what kind of sales we drive with that constraint in place first.”

The 210-unit BJ’s ended Q4 with same-store sales sliding 32.3 percent after an up-and-down stretch, especially in its biggest market, California. The chain posted revenue of $197 million or a 32.3 percent drop, and swung a net loss of $18 million. However, the brand did manage to generate $2.4 million in adjusted EBITDA in Q4.

The quarter started on a high note with weekly sales averaging more than $83,000 per restaurant despite only 28 of 62 California units being open for the full month. Rising COVID cases in November and December led to additional restrictions in multiple markets, including the closure of outdoor dining in California. As a result, average weekly sales per restaurant dropped to $78,000 in November and $60,300 in December.

Since then, restrictions have eased. Three stores in Kentucky reopened in mid-December, and nine units reopened in Colorado and Pennsylvania in early January. Then in the final week of January, California brought back outdoor dining. January saw $66,400 in average weekly sales per restaurant and 64 percent in average capacity.

Maryland, Michigan, and Washington have also lifted restrictions, which has raised the weekly average to more than $74,000 per restaurant in the first two weeks of February. In the past two weeks, California’s comp sales have risen by more than 20 points due to outdoor patios returning.

As of Thursday, 144 restaurants have open dining rooms and 65 can only serve outdoors. One store remains temporarily closed.

“Although we are prepared for the pandemic recovery to continue to be uneven, we are optimistic that ongoing vaccination efforts and improved treatment protocols will continue to have a positive impact on sales,” Trojan said. “Our ability to take advantage of improvements in the sales environment will benefit from running the plays we have learned over the past year to maximize dine-in capacity through both indoor and outdoor seating. And in addition, we continue to double down our efforts to maintain and grow our off-premise business. Our ability to prioritize the near term, while not neglecting the longer-term opportunities for our concept, will pay dividends in the years ahead.” 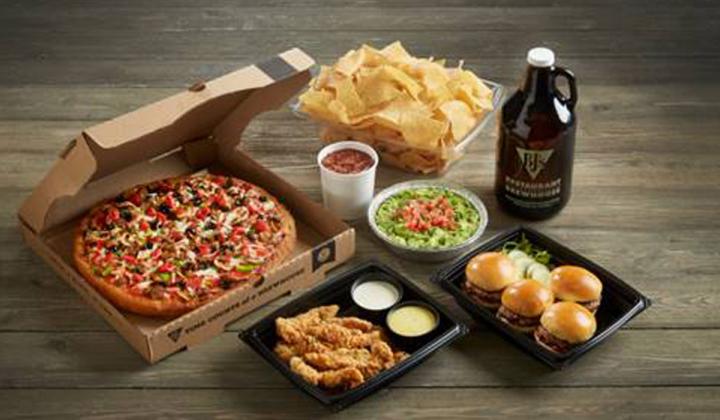 BJ’s will always invest in technology, but never sacrifice service and hospitality.

Moving forward, BJ’s hopes to incrementally lift sales even higher with its beer subscription program. The beer club is being tested in eight of BJ’s Sacramento stores. Trojan said members are engaged, increasing their visits to BJ’s, and utilizing certain benefits. For example, members have the ability to refill a growler for $5. And when they do, more than half are buying food again to go along with it.

The program’s pipeline includes Bourbon Barrel Chocolate Stout and Coffee Blonde, which received the bronze medal at the Great American Beer Festival. The brand expects to launch the beer club in most of the California restaurants in the next couple of months. It’s also evaluating expansion into other states later this year.

Because of differing alcohol laws, BJ’s is limited as to where it can implement the program. CFO Greg Levin estimated it could reach 70 percent of restaurants currently. If other states open up, that number could become higher.

Looking toward the future, BJ’s is committed to opening stores in Merrillville, Indiana, and Lansing, Michigan, which were under construction at the beginning of the pandemic. Trojan said the real estate team is working to build a pipeline for 2022 and beyond, but he noted the company is being cautious about not agreeing to new leases until there’s more clarity in the environment.

The CEO said for years, people have asked why BJ’s unit development isn’t faster. Each time, he responds by saying the brand prefers to open with quality as opposed to quantity. To Trojan’s point, Levin said the floodgates haven’t opened yet in terms of good real estate, as so many had predicted earlier in the pandemic.

Levin added if BJ’s targeted B and C sites, it could very well ramp up to 15 to 20 stores per year. But that’s not the company’s growth strategy.

“That's been a hallmark of BJ’s,” Levin said. “We have not had to close a restaurant because of performance in that regard. And even now, even though we're taking some impairment on restaurants, we've had to do that mainly because around COVID and the accounting rules versus where those restaurants were operating a year ago. So again, we've always been quality first, and we'll continue with that. But at the same time, we're going to be opportunistic when those availability of new sites come about.”

Regarding the $15 minimum wage debate, Trojan estimated fewer than 50 percent of restaurants would be impacted in the first couple of years of a gradual increase because many stores are already significantly above the current federal minimum wage of $7.25.

He said BJ’s is more concerned about the labor pool. He noted it’s somewhat challenging to get team members to come back into restaurants. Trojan attributed some of that to workers moving to new industries and some to employees not feeling safe enough. However, he does expect the labor market to be better than the industry has seen in the past two years as vaccinations continue.

Trojan added BJ’s will always invest in technology, but it will never sacrifice service and hospitality.

“So I wouldn't be sitting here trying to build a model on your end and saying, ‘OK, with wages going up, BJ's will take servers from three, four table stations to eight, nine, 10 table stations,’” Trojan said. “… That’s not how we're going to grow top-line sales, which is ultimately the best way to manage labor. So we're going to take more of that authentic approach, but we'll always invest in technology.

“If we know what our sales are each week, we can drive really or manage really good labor,” he continued. “The challenge that we've seen through COVID is those schedules go up and down each week. But when there's predictability in our business, we'll get leverage in that, and that's what we need to do, and we'll continue to invest on that aspect of it.”