The iconic chain is leaning on decades of history to open ghost kitchens and more.

Bennigan’s CEO Paul Mangiamele is no stranger to the street fight of running a restaurant. This is, after all, the same brand nearly erased 13 years ago after a Chapter 7 bankruptcy. All 150 corporate restaurants shuttered and soon, 138 remaining franchises become 70, before retracting further. Today, there are 11 domestic and 14 international restaurants.

COVID-19 didn’t offer any warning shot, however. “We got sucker punched,” Mangiamele says. Like restaurants of every size and background, Bennigan’s didn’t consider “managing a global pandemic” in its 2021 outline. It didn’t prepare full-service restaurants to run without any service.

“It’s like, what do you do? Do you lay down and die, or do you get up and fight like your life depends on it? Because it really does,” Mangiamele says.

Beyond the standard pivots, such as delivery and curbside, Mangiamele realized he had to think beyond day-to-day tactics at his company, Legendary Brands, which also holds the rights to Steak & Ale.

Between Bennigan’s and the latter, Mangiamele is the caretaker of nearly a century of restaurant equity. Bennigan’s was founded by Norman Brinker in 1976; Steak & Ale (also by Brinker) in 1966.

“So where are the assets?” Mangiamele says. “And the assets we have are the intellectual properties. Some brands aren’t as lucky as we are from that standpoint because we’ve been around for decades and decades. People have come to love a lot of our food. They jones for us.”

For all of COVID’s disruptions and performance drag, it did change the distribution game. How brands get food to customers is wider than ever. Unlike in the past, you don’t need to open a brick-and-mortar restaurant on every corner of Main Street to spread awareness and enjoy benefits of scale.

Mangiamele’s goal now is to leverage the emotional connection guests have with his concepts, of which there’s plenty, and unlock avenues to growth. And it’s happening today across two main fronts.

One is licensing Bennigan’s trademarked menu items, including its Death by Chocolate dessert, Oh, Baby Back Ribs, and World Famous Monte Cristo, to other brands in an effort to generate incremental revenue. 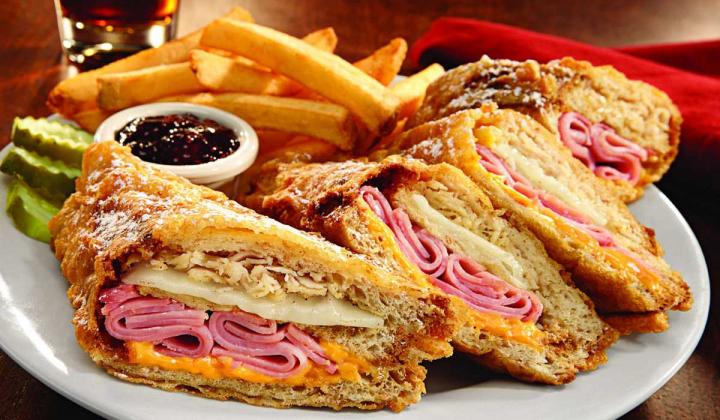 The World Famous Monte Cristo served out of a ghost kitchen? It's coming. 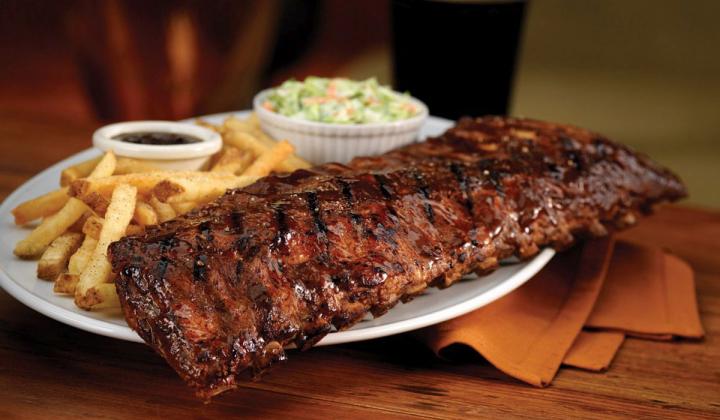 For instance, Kinseth Hospitality Companies, which directs 75-plus hotels, also runs Bennigan’s locations in Iowa. The idea struck to start using some of the restaurant’s product inside other properties, without building additional Bennigan’s locations.

They inked a licensing agreement to debut two virtual kitchens under the “Bennigan’s On The Fly” banner in Coralville and Dubuque. Kinseth will offer Bennigan’s On The Fly for delivery, and to its guests, in two of its hotels. They’re expected to be up and running sometime in February.

Mangiamele says Legendary Brands is also in talks with Entegra, a subsidiary of Sodexo, to potentially explore “thousands of properties.”

Bennigan’s “On The Fly” concept has the ability to emerge across multiple iterations, like a virtual kitchen in Beaumont, Texas. An operator forced to close decided to turn their space into a ghost kitchen.

Mangiamele says venues nationwide, especially hotels with gigantic kitchens and space, can bolt on a Bennigan’s opportunity. These companies can add the chain’s well-known product line to existing spaces, in other terms.

And then Bennigan’s can work with the concept’s point-of-sale system so there’s a commission on the sale of the product. It’s similar to what Nathan’s, Wow Bao, and some other restaurant chains are trying. Essentially, giving other restaurants (or hotels) the chance to start serving their branded products out of current kitchens. Whether that’s visible upfront or not, for delivery or dine-in. Either way, Bennigan’s broadens reach without opening another physical store. Think of it like Chili’s launching 1,000-plus “It’s Just Wings” out of its existing restaurants. Only here, Bennigan’s is doing so from the kitchens of different restaurants and companies.

The other option is the more common path, where Bennigan’s On The Fly opens a virtual kitchen that’s just its brand.

Sometimes it’s Bennigan’s On The Fly specific, and sometimes it’s an incremental addition to a virtual kitchen already operating where they feature the food.

Mangiamele says both present growth potential for existing operators hoping to diversify, as well as new strategic partnerships. Again, the idea of, say, an independent restaurant, starting to serve Bennigan’s from its kitchen.

“You can see the upside,” Mangiamele says. “It’s why I’m still very bullish and ebullient about the future for us, because I can take bits and pieces. It’s not always a brick-and-mortar solution.” 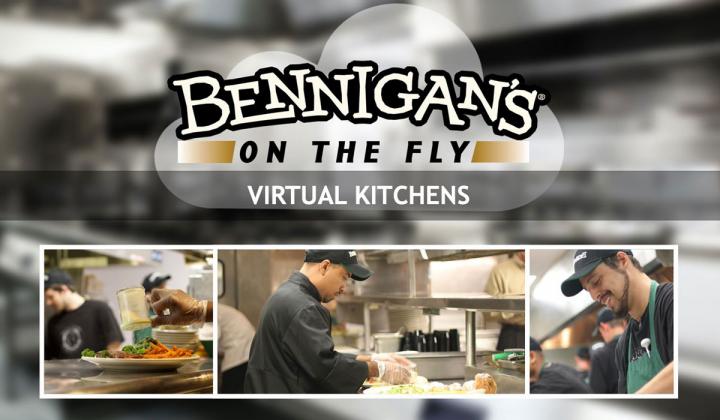 Kinseth, a longtime hotelier and franchisee of Bennigan’s in Clear Lake and Urbandale, Iowa, will offer Bennigan’s On The Fly for delivery, and to its hotel guests, in two of its hotels.

People often ask Mangiamele if Bennigan’s can ship products across the country. All these years later, customers have the nostalgic pull. They ask for recipes.

“It’s becomes one of those things where that’s a valuable asset and then you’ve got to be smart enough to leverage it, and we’re starting to,” he says. “We’re starting to develop that. But it’s almost like you’re forced to accelerate all these programs, whether it’s delivery or online ordering, because if you don’t, then you’re the guy who gets sucker punched and rolls up and dies. We certainly won’t be part of that group.”

These venues can make and serve more Bennigan’s product, negotiate third-party delivery agreements, and subsequently increase the trade area and gain market share, Mangiamele says. “At least my plan is to use that demand to justify why there should be a Bennigan’s On The Fly or, when things start to normalize, a full Bennigan’s or Steak & Ale in that trade area. Because the demand will be there.”

It’s a key tenet of the ghost kitchen lure, in terms of a long-game journey—learn where to invest in future infrastructure with minimal investment.

Understanding these opportunities is critical at this COVID juncture, Mangiamele says. Everybody is trying to bridge the gap and make it, but the industry has plenty of hurdles left to leap. Landlords need to get paid. So do banks, whether it’s SBA or outright debt financing. “A lot of things were deferred,” Mangiamele says. “But that money doesn’t go away. That money is still owed.”

And so, like many pundits, Mangiamele believes a bevy of bankruptcies, consolidation, and closures are still to come before restaurants can cash in on pent-up demand.

For perspective, the limited-service restaurant segment, encompassing fast food and fast casual, nearly quadrupled debt between 2009 and the end of 2019. The full-service sector saw a less aggressive increase in its debt of nearly 30 percent. During the early days of COVID, brands across both sectors proactively engaged in negotiations with lenders, AlixPartners said in a recent study. The goal being to draw down on revolvers to maximize liquidity runways and avoid covenant violations. This increased debt between 2019 and the last 12 months 2020 by 8.1 percent for limited-service units and 15.7 percent for full-serves. The former now sits at more than four times as much debt, while full service is at nearly 50 percent more than at the start of the Great Recession.

Put simply, the shakeout will have multiple layers in the coming year and beyond.

“Even though I’ve been in the business for over 40 years I’ve never seen anything, politically or from an industry standpoint, or from this insidious pandemic that has hit our country and obviously around the world, like this,” Mangiamele says. “None of us has ever seen anything like it.”

Just looking at more-opened states, like Texas and Florida, Mangiamele says the desire to dine out again is clear. It’s all the more reason he’s optimistic he’s got iconic brands at the ready.

However, the return of guest demand isn’t a signal to slack on pandemic improvements, he says. Hygiene, air filtration, and other sanitation practices of COVID need to be addressed, not just now, but forever, Mangiamele says.

“It’s not we just have to get past it. It’s like yep, put in place some solid programs that will address all of these different areas so not only can you continue to be in business, you can grow your business when we do see some normalization,” he says.

As a system, Bennigan’s is somewhere around 60 percent of pre-pandemic sales today. Naturally, it’s a market-by-market story based on regulations. Those in Texas are going “full gun,” for instance.

The brand worked on delivery and digital ordering throughout, with off-premises business surging as high as 70 percent of mix in some spots. Bennigan’s took the well-worn COVID paths, from adding logistics to enable curbside to making sure delivery drivers could pick up food without bottlenecking restaurants. Additionally, grocery delivery, alcohol in carryout orders, and menu simplification. 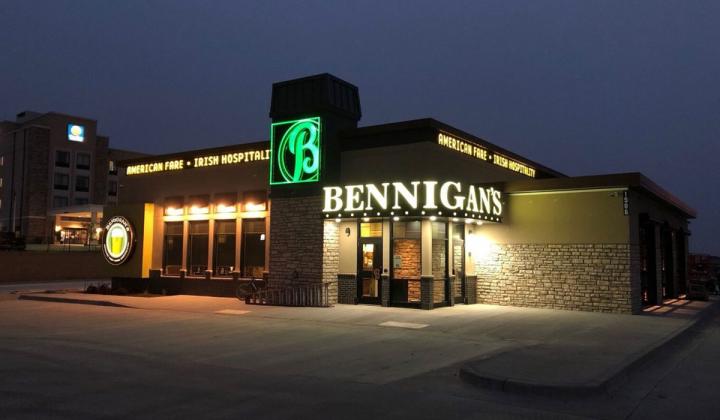 Bennigan's is pursuing growth with a small-market strategy, with a smaller footprint store.

Mangiamele says they’ve seen a “V-shaped sales recovery” where dining rooms reopened. He expects the same industry-wide, although the bottom part of the V has felt years-long. Almost like a “U.” Yet the same sentiment: Prolonged delay. Pent-up demand.

Bennigan’s is also forging ahead with a redesigned prototype that goes back a couple of years. The option to open around 5,200 square feet or so instead of 8,000 to 10,000. Before, it was more of a real estate model than a franchise one.

The smaller store offers better unit economics and, in turn, a more ready investment for operators.

Speaking specifically to the smaller-market path, which continues to gain preference throughout casual dining (think Texas Roadhouse), Mangiamele has preached the idea for some time. It allows Bennigan’s to expand trade areas from a few blocks to 20, 30, 40 miles, etc. The brand becomes a destination—and employer of choice—the moment it lands.

There’s a prevailing notion, too, that rationalization from COVID will disproportionally hit independents. And these operators generally dominate lower-population markets where larger chains skirt development.

Mangiamele offers an anecdote in North Dakota where one customer, of the 1,000 days the restaurant was open, showed up some 900 times.

So there should be room to grow in secondary and tertiary towns across the country as COVID settles, especially if demographics shift from people migrating out of locked-down metros. Mangiamele thinks we could ultimately stare down 200,000 closures.

In that wake, small-market opportunity as well as second-generation sites will emerge. Just from a franchise model standpoint, it suddenly shifts the cost from roughly $2 million ground-up to $500,000 or so, Mangiamele says. “And you can be in business where you can make three and four times that amount, if you’re following the system and executing. The unit economics become very compelling.”

It hasn’t been an easy stretch for Bennigan’s or anybody else, to make a wild understatement. But COVID forced Bennigan’s to dig even deeper into culture, training, and the “TLC” mindset Mangiamele often references. Not “tender loving care,” but “teaching, listening, and coaching.”

Delivery and curbside aren’t going anywhere. Either is digital growth, he adds. Bennigan’s will have to rebuild lunch and bar business like anybody else.

However, the classic brand will be ready for whatever barrels around the corner. It has to be.

There’s a Winston Churchill quote Mangiamele enjoys sharing that he says captures the times. “Success is not final, failure is not fatal: it is the courage to continue that counts.”

“What wise words,” Mangiamele  says. “You’ve got to carry on, man. You’ve got to have the courage to get up, get up off the ground, and fight hard.”

Steak and Ale Readies for a Comeback of Epic Proportions
Dave & Buster's Enters the Metaverse by Opening on Roblox
Omni Hotel at The Battery Atlanta to Open New Concept, National Anthem