Alongside Bennigan's continued resurgence, the company is planning a new format for Steak & Ale.

The chain recently landed a starring role in romcom ‘About Fate.' But it's not just great exposure; it's affirmation for years of hard work.

For the 30-plus years Paul Mangiamele has been in the restaurant business, he’s cultivated a saying: “People, passion, and culture will always beat strategy and tactics.” The CEO of Legendary Restaurant Brands, which oversees the only chains Norman Brinker created in Bennigan’s and Steak & Ale, has held to this line through comebacks, setbacks, COVID-19, and the recovery turn. But recently, everything clicked into place in a way even Mangiamele didn’t see coming—Bennigan’s landed a role in a major film.

“It was galvanizing is what it was,” he says, “because it validates our brand.”

Romcom “About Fate,” which stars Emma Roberts, Lewis Tan, Madelaine Petsch, and Thomas Mann, and premiered in theaters on September 9, begins in a Bennigan’s. The restaurant serves as the backdrop for key scenes throughout, with signature menu items like the Turkey ‘O Toole sandwich, Death by Chocolate dessert, and Peach on the Beach drink clear on display.

Mangiamele says producers, who were familiar with Bennigan’s beforehand, reached out looking for a family-friendly setting. They shot the movie in a previously shuttered venue in the greater Boston area. The furniture and fixtures were updated and Mangiamele pulled different Bennigan’s pieces out of storage in Dallas. The team loaded up a truck and road tripped back to Boston. Mangiamele brought menus and T-shirts. A neon green logo hangs visibly. It took about five days to convert the spot into a locale ready for Hollywood.

Mangiamele and his wife, Gwen, who bought Bennigan’s and Steak & Ale in 2015 after leading it since May 2011 (this is when Legendary Restaurant Brands LLC was formed), are extras in the movie as well. They sit in a booth behind Tan and Roberts during a scene where they spar back and forth and Roberts tosses a Peach on the Beach.

“When I saw how many times Bennigan's was mentioned and how so many scenes were shot in the Bennigan's, it's was like, holy mackerel, this is like a billion-dollar commercial,” Mangiamele says.

To his earlier point, Mangiamele says “About Fate” reinforced much of what he tells franchisees and corporate leaders. “I’ve been saying this for years,” he explains. “We were the pioneers of casual dining as a category all those years ago [Bennigan’s was founded in 1976 and Steak & Ale in 1966]. I’m proud of that fact. A lot of the other brands out there in the casual-dining segment followed us into it. To be recognized for that not only validates what we’ve been doing, but it galvanized my team, it galvanizes our guests, it galvanizes our franchise partners.”

Bennigan’s began touting in-store promotions and sending movie posters into the field. It shared the materials with prospective operators overseas and domestically to lend weight to Bennigan’s selling points. Or as Mangiamele quips, “It validates the brand to an extent that people can see that, you know what, Paul is serious when he’s talking about world domination.”

Mangiamele has long been a proponent of what he labels the “soul that’s called culture.” It’s where he thinks casual dining drifted in recent years and what’s now fueling its return to relevance. “Some brands just want to be all things to all people and that's a recipe for disaster,” he says. “And I think today, you know what, Bennigan's and other brands are truly in a regenerative moment. You’ve got the young upstarts giving way to the resilience of iconic and legacy brands, brands that have delivered time after time after time.”

“Some new brands are trying to build a better mousetrap when most should just focus on executing better, and going above and beyond the call of duty to make sure you can deliver what we call legendary experience every day, every meal, every guest. That’s our mission. Again, [the movie] validates that the mission is true and the mission is righteous.”

Throughout COVID, Mangiamele worked to open access to his brands. There’s currently 11 U.S. units and 15 international.

This effort included virtual kitchens and, presently in the works, a spin of Bennigan’s On The Fly (the chain’s fast casual iteration) into a food court format.

Mangiamele expects to initiate the first one overseas, with an adapted menu and scaled-down footprint, but there’s been interest stateside, too.

Overall, though, it speaks to the earlier theme of retro being in again across so many consumer verticals these days, from movies to cars to clothing and, yes, restaurants. Mangiamele has courted this concept for some time. He took to calling it “New-stalgia” last year as a way to explain how Legendary Brands viewed the opportunity. Put differently, the chance to recreate Bennigan’s intimacy of product through a suite of options. Bennigan’s On The Fly creates more diverse franchising opportunities and corrals a new demographic, Mangiamele says. While the typical full-service Bennigan’s sites are free-standing, 5,200-square-foot restaurants with full bars and patios, the quick-serve is adaptable and ready to flood nontraditional venues like airports and arenas. Mangiamele told QSR more than a dozen were in the development pipelines, with whitespace to chase, from ghost kitchens to international markets such as the Middle East and Central America.

“And now I thought, why don't we even have more cross-brand utilization by opening Bennigan’s On The Fly Food Court where, again, you can go into 1,500 square feet in the food court where Bennigan's is already well known,” Mangiamele says.

When Mangiamele has a master or area developer look at a specific territory now, they can potentially deploy five different brands within the parent company. “I think that’s smart business,” he says, “especially in a time where it gets harder and harder to find good locations, and it gets harder and harder to find the money to build these restaurants. So we can utilize different spots in the food court that have closed.” 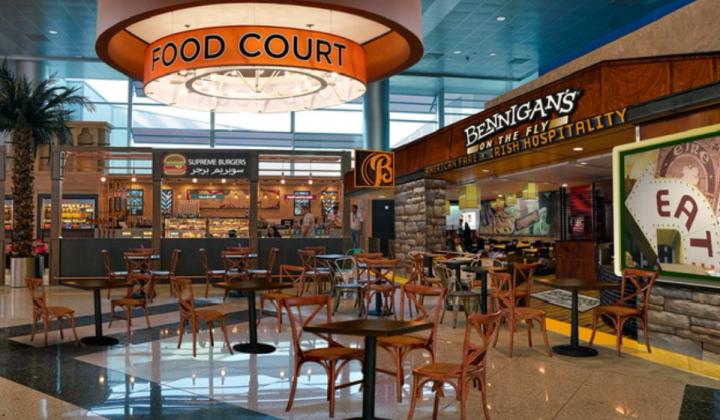 Bennigan’s On The Fly Food Court is yet another way the iconic chain can get its brand in front of guests.

Mangiamele says he’s also working on a "Steak & Ale Classic" concept that would, like Bennigan’s fast casual offshoot, represent a smaller footprint version of the original, which today doesn’t have any locations. Bennigan’s has brought some of Steak & Ale’s menu items into its mix, but the iconic venue has yet to resurrect as a brick-and-mortar. All remaining units shuttered as part of a Chapter 7 bankruptcy proceeding in late July 2008 (the same was true of non-franchised Bennigan’s).

Steak & Ale Classic would bring the investment down for operators as well, which Mangiamele says will be on the minds of franchisees for the foreseeable future given elevated supply and labor costs.

“Adapt, improvise, overcome,” he says. “… Not create what so many brands you’ve seen do—create a new brand and by the time you market and advertise and try to get people to recognize it’s a spinoff but called something different from the core brand, again, I think it’s an exercise in futility. Why not capitalize on the brand awareness you already have?”

Steak & Ale and its dimly lit, Tudor-style decorated dining rooms, grew as large as 280 locations in the 1980s. Mangiamele says he’s been a “little stubborn” over the years guarding its perception and historic touchpoints, like the salad bar. “You don’t want to lose that beautiful image in people’s minds,” he says, “and that emotional connection.”

“I’ve been very deliberate, and, hopefully, intelligent about it because it’s a franchise concept,” Mangiamele adds. “I’ve got to be really careful about who I choose and the location that we choose about the first one, because you just can’t get it wrong. But now, I wanted to adapt and offer Steak & Ale Classic, where I still get that and can be smart in terms of the competitive landscape.”

It adds another “arrow to the Legendary Restaurant Brands quiver,” he says. And it reflects what’s in motion more broadly. Mangiamele is an adamant believer in not changing what got you to the ball. However, there are opportunities at this pandemic-bounce back juncture to think outside the old parameters of what it meant to run a restaurant.

“We have a Steak & Ale following. There’s over 60, 65,000 raving fans who have been guests or actually team members of Steak & Ale, and they want it back, and they want it back right now,” he says. “I think they forgot how hard it is. It’s not an easy thing to do. I’m a stickler for the details. I’m a stickler for staying true to the look and the feel and the ambiance that we can create … But it’s a winner wherever we go.”

Mangiamele tells a story about a unit that closed in New Jersey. The son of the operator wrote him a letter when he announced plans to reinvigorate Steak & Ale in the future. When the first one opens, Mangiamele says, she’ll cut the ribbon. “That’s part and parcel of why my wife and I bought these brands,” he says. “I had so many people saying, ‘are you crazy? You’re going to put your money into these dead brands? The Walking Dead? Zombie brands? And I still say it to this day, the naysayers in this world pale in comparison to the deep and rich culture that these brands represent.”

As difficult as these last couple of years have been, Mangiamele says he’s noticed a settling of some volatile trends. The price of proteins is coming down. Supply is stocking back. And the restaurant field itself continues to favor brands with dry powder ready to capitalize, whether that’s second-gen space, soaring grocery prices, or pent-up demand. “Particularly in full service, I see the bar business becoming very robust,” he says. “People want to socialize and they’ve missed that for two-and-half years. That, coupled with this great movie coming out, spells a lot of success for Bennigan’s and Steak & Ale.”