Applebee's is Ready to Grow Again

The casual-dining chain will return to stable and predictable expansion.

For the first time in three years, Applebee’s president John Cywinski feels like he can predict the future. His hands aren’t tied, at least. Underperforming restaurants are out of the system. Applebee’s ad fund is whole. Its bad debt essentially nonexistent.

“… And the brand is poised for predictable, stable growth,” Cywinski said during the company’s third-quarter review. “And we won’t have those missteps with respect to value as we turn the corner on 2020.”

The latter note is actually a breath of operational fresh air for Cywinski and Dine Brands. In the second quarter of fiscal 2019, Applebee’s launched Loaded Fajitas, but didn’t do so at a “compelling nationally advertised price point” or with an effective incentive. They ranged from $12.99 to $16.99 (chicken versus steak) in Southern California. The deal inspired trial. Yet it fell flat with Applebee’s core customer—the value-seeking guest it so often touts. And because of that, incrementality dropped below expectations and Applebee’s missed a chance to boost traffic with a promotion that actually spoke to its brand affinity.

“Trust me when I say we’ve applied that learning to our tactical plans moving forward,” Cywinski said.

THE YEAR IN REVIEW SO FAR:

Q2: Applebee’s gets aggressive in search of the ‘value seeker’

Q1: Why building a brand of higher performers is making the difference at Applebee’s

But here’s where Applebee’s differs today than three years ago, when its leadership overhaul and strategic turnaround really began. The brand can course-correct these issues without significant roadblocks, or balance-sheet anchors. And they can do it as an aligned franchise system, Cywinski said.

“When we met with our franchisees recently in the past few months, we zeroed in on value, value perceptions and very specifically aggressive value tactics engineered to be profitable, but those that would drive that value seeker to incremental traffic and sales,” he said.

A current market example of this: Applebee’s 25-cent wing deal, which was agreed on by store-level operators a few months ago and is currently rolling.

Applebee’s figure compared to Q3 2018’s 7.7 percent jump—the brand’s highest quarterly sales increase in more than 20 years and best sustained sales and traffic performance in at least 14. The run was anchored by Applebee’s All You Can Eat Riblets and Chicken Tenders returning to the menu, as well as its three-course meal deal.

Here’s how same-store sales are trending at Applebee’s:

In terms of the system pruning Cywinski referenced, Applebee’s had 1,707 domestic restaurants on September 30, 2018. It’s trimmed by 40, year-over-year. The brand had 2,016 U.S. locations in December 2016. Applebee’s plans to return to “selective new unit development” toward the end of 2020, he said.

Applebee’s lowered its outlook for the remainder of fiscal 2019 to flat to negative 1 percent same-store sales (from flat to positive 1.5 percent previously). It also expects to close the calendar with 30–40 closures globally, the majority of which will be domestic. It was 20–30 before. 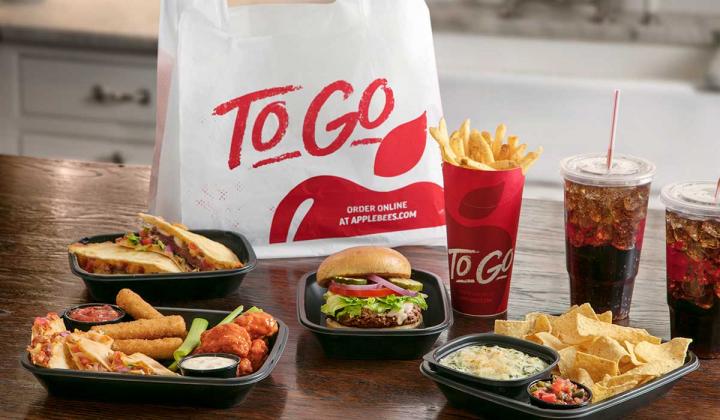 Applebee's went nationwide with its delivery program in the summer.

Applebee’s spoke a lot about franchisee profitability in the call. It also provided some glimpses into future innovation.

He added tablets have generated revenue benefits as all orders, particularly beverages, are more likely to be captured and data entered. Cywinski said they’ll be deployed in sequenced fashion throughout the next two years, with high-cost labor markets first in line to receive.

He said Applebee’s believes tablets can “meaningful enhance our guest experience” and are a “very contemporary cue for the brand.”

The chain also recently activated catering across its footprint. Cywinski expects the channel to represent a significant incremental sales layer—and one Applebee’s will begin leveraging aggressively next year.

“We're going to target both residential catering for families and family get togethers and social occasions, but we're also going to go after business catering as well because we believe in a lot of cases, our product would be more desired than some of the other ones that own that business today,” added CFO Thomas Song.

Back to the bottom line

Cywinski said Applebee’s hit three key milestones in 2019. Firstly, it completed the three-year initiative around closing stores (roughly 200 low-volume venues are gone). This coming year will bring a normalized closure rate of less than 1 percent of Applebee’s current base.

Dine Brands completed eight franchisee transactions over the past two years as well that represented about 170 restaurants. This portfolio evaluation resulted in the exit of “several underperforming operators while introducing new and deeply experienced franchisees to the Applebee’s system,” Cywinski said. It created growth opportunities for some existing operators, too.

The chain doesn’t look at this as a long-term play, though. As the units stabilize, Dine Brands will plot an exit strategy and seek “high-performing new franchisees that are interested in growing with us,” CEO Stephen Joyce said.

Yet the big kicker, he said, might be the fact Applebee’s has no material royalty or advertising delinquencies for the first time in three years.

“This is a significant development, one that ensures a far more stable and predictable income stream as well as a fully funded 4.25 percent marketing plan coming up here in 2020,” he said.

“These very tangible milestones bode well for our future. It means the Applebee's brand is stronger than it's been in quite some time without the constraints, challenges we've had to navigate over the past few years,” he added. 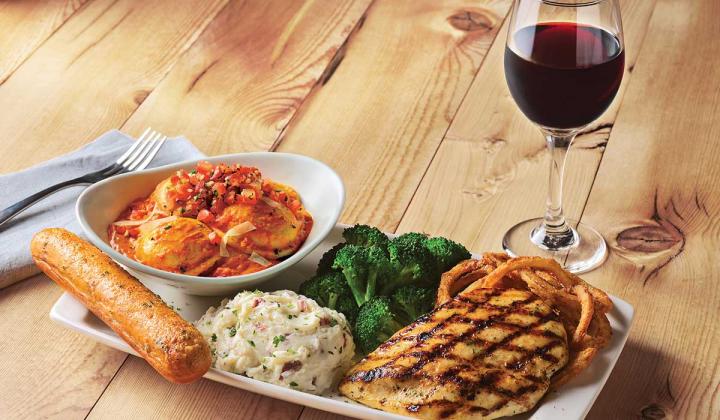 One of the issues plaguing Applebee’s in recent years was the gap between its positive performers and its bottom stores. Cywinski provided some data that shows why retraction was a critical, if painful, step for Applebee’s to take.

At the start of 2018, the percentage of guests experiencing a problem was 8.1 percent, which is a pretty alarming number. Today, it’s 4.3 percent, “with very little variability across the system,” he said.

And it flows into the value perception challenge, which Cywinski said was a central point of discussion between franchisees and corporate. Expect to see a renewed commitment, he said.

Applebee’s Q3 off-premises sales bumped 13.7 percent on top of last year’s 36.6 percent lift. The difference is more a matter of one result bouncing off the bottom than this year really slowing down.

To-go currently represents about 70 percent of Applebee’s off-premises mix. Delivery makes up the balance, with more than 1,400 units offering the service through Applebee’s website and third-party activations. Roughly 65 percent of the brand’s off-premises orders are now placed digitally.

There were some issues with delivery profitability to date, the company admitted. It led Applebee’s to refine its vendor contracts to ensure sustainable margins for franchisees. The move essentially passes along the fees to guests.

The company’s four-wall EBITDA margins dropped 1 percent in Q3 thanks, almost entirely, to the increase in delivery service provider fees paid, Joyce said. In total, it was about 100 basis points tied to the cost associated with delivery build. Song said operators will get “a lot more than half back,” with the renegotiated agreement. “It puts them back in the position of almost equivalent profitability, whether it's carryout, in restaurant or delivery,” he said.

The health of franchisees

Joyce said Dine Brands has placed heavy focus on improving franchisee financial health over the past two years, while also working on brand relevance, and attracting new operators to the system.

In terms of four-wall performance, when looking at trends from 2017–2018, Applebee’s saw an improvement in margins, driving by a 5 percent increase in comp sales. While cost of goods remained flat, about 25 percent for the system, total operating expenses, including labor costs, decreased slightly for four-wall profits that start in the low double-digit margin range.

In 2019, average-unit-volumes on stores remaining open are slightly stronger than systemwide comp performance, up over 1 percent in the first six months of the year compared to the same period in 2018.

And while delivery took the four-wall EBITDA margins down a percent, EBITDA margin was still in the low double-digit range, as noted.

“With respect to franchisee entity debt leverage, we have seen dramatic improvement since 2017,” Song said. “Looking back, the system averaged 3 times debt-to-EBITDA historically, but then had significant variability in 2017, and they returned to a more normal range in 2018 with approximately 3.5 times average leverage.”

Dine Brands’ G&A for the third quarter was also $38.9 million compared to $40.8 million for the same period of last year.