The Spiked Football: a tiki style drink served in a custom football-shaped glass.

The chain's "Greatest of All Times" campaign wants to remind customers of their favorite sports bar story.

In recent months, Buffalo Wild Wings’ efforts to get customers back through its doors has run the gamut. It launched a weekly trivia night—Blazin’ Trivia—with $50,000 and a trip to Las Vegas on the line. Hosted every Wednesday, teams compete in-store and against other players nationwide. The key: Guests follow along on TV screens inside locations.

Buffalo Wild Wings also expanded its partnership with BetMGM in March to offer curated, boosted odds and promotions for customers playing who also happen to be dining at the restaurant (New Jersey, Indiana, Colorado, West Virginia, Tennessee, and Iowa, as laws permit). The chain created an in-store channel called “OT Odds Powered by BetMGM” to scroll content like live game odds and fantasy and betting advice.

Clearly, Buffalo Wild Wings is taking aim at something pressing sports-bar chains long before COVID-19 injected wariness into the dine-in experience—you have to showcase entertainment beyond the “big game” to get customers off their couches and into booths.

So what’s on deck for arguably Buffalo Wild Wings’ biggest season of all, football (March Madness is in the running)? A head-to-head sports bar competition.

The chain announced Monday it’s partnering with Converge Technology Solutions to use IBM Watson to tally scores between restaurants, “marking the first-ever application of the artificial intelligence technology in a head-to-head competition between two different sites.”

It’ll be scored in three ways:

These points flow in live and are displayed on a scoreboard at each restaurant. The fanbase that tops at least two of three categories will be crowned the winner. And that city receives a donation to the Buffalo Wild Wings Foundation to support local youth.

Competition starts September 2 when Ohio State visits Minnesota. Customers at the Buffalo Wild Wings locations nearest to their school’s football stadium “will be steeped in a head-to-head competition, where they’ll compete against one another in various challenges to determine who really had the Greatest of All Times,” the company said.

In the lead spot, Murray loses his phone after a visit to Buffalo Wild Wings. When a group of his friends, or “The Crew” find it, their attempt to return it to Murray leads to a meetup with Ogwumike, and a party with Allen. In the end, they all arrive back at Buffalo Wild Wings.

The concept is straightforward—everyone has a great sports bar story. “Through the Greatest of All Times, Buffalo Wild Wings seeks to replicate those moments for its fans—the ups and downs, the cheers and tears, the high-fives and heartbreaks. It’s all part of the Buffalo Wild Wings experience,” the chain said.

“The start of football season is not only one of the most anticipated times of year for sports fans, it’s also an exciting time for Buffalo Wild Wings sports bars across the country. Kickoff means getting together with your crew to watch the game, feasting on great food and making unforgettable memories together,” added Rita Patel, CMO. “Our Greatest of All Times campaign is all about bringing that camaraderie to life. Whether that means gathering at our sports bars or at home, we’ve got you covered this fall.” 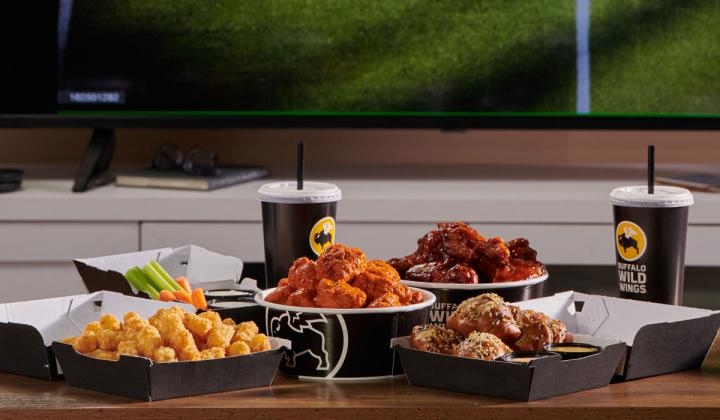