Why Vermouth Should Be On Your Beverage Menu

Similar to the amaro boom, vermouth is catching the coattails of the low-ABV trend.

For decades, vermouth sales in the U.S. have stagnated amid perceptions that this fortified wine is only meant for shaking into martinis or pushing aside to reach the good stuff in your parents’ liquor cabinet. As Americans’ thirst for lower-ABV aperitifs and digestifs grows on the heels of the amaro boom, more are coming around to this herbaceous fortified wine’s star potential.

The term vermouth derives from wermut, German for wormwood, which is its main bittering agent. Cultures have been macerating wine with spices and herbs for centuries, but most consider the first vermouth to be that created by Italian distiller Antonio Benedetto Carpano, in the 1800s.

Vermouth is nothing new to bartenders, who routinely stir it into such famous cocktails as the boulevardier, manhattan, and negroni. Now the global vermouth market is on track to post a 6 percent compound annual growth rate between 2018 and 2022, driven in part by a spate of product launches, according to technology research company Technavio.

“It seems like the whole world of vermouth is reopening,” says Drew Cuddy, founder and managing partner of Satellite, a wine bar in downtown Santa Barbara, California. “We’re seeing growth among traditional producers, and a bunch of new ones seem to be popping up every few years.”

Cuddy pours daily-rotating, 2-ounce nips of vermouth, maderized wines, and wine-based amaros at his vegetarian eatery. The offering is partly due to the limitations of Satellite’s liquor license, though perhaps equally to Cuddy’s own interest in the category. He’s been known to flip to the back of distributor portfolios and throw in a mixed case of whatever fortified wines they carry.

He admits that vermouth is a loss leader; he charges a “commodity” $10 price per pour regardless of cost, to keep it accessible. Yet for a concept focused on mercurial natural wines, vermouth is a highly versatile, comparably shelf-stable tool in his limited inventory.

“For people who’d go for a manhattan, I can riff and pair it with sherry in a lower-ABV Bamboo,” Cuddy says. The Perfect Bamboo combines vermouth, sherry, Tippleman’s Double Spiced Falernum syrup, and orange bitters. “We also do it as an after-dinner drink, or as an aperitif before. There’s so many different herbs that traditionally were thought to contribute to stomach settling and comfort. It’s nice hospitality to offer a half pour at the beginning or end of the meal, so people feel welcomed or thanked.”

Vermouth is also a differentiator and lends a fun, intrepid streak that mirrors the oft-changing food menu. “Being able to take that mystique and bring it down to a casual level really adds value to program that a lot of places might not consider doing,” Cuddy says. 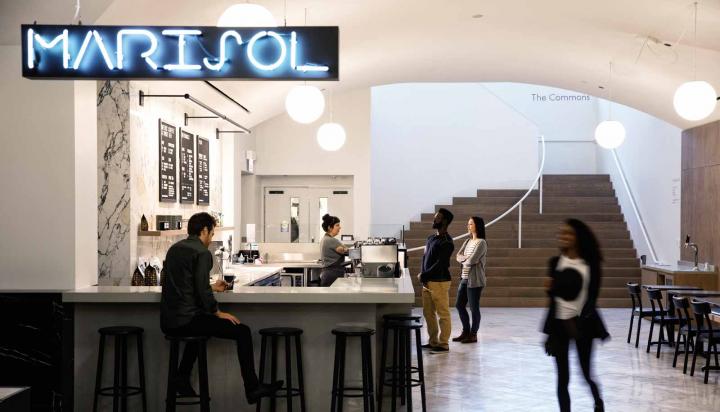 Located within the Contemporary art museum in Chicago, Marisol focuses on low-ABV beverages, making vermouth an integral part of its cocktail program.

Marisol’s beverage program focuses on suppressor cocktails—all featuring vermouth—that use lower-ABV spirits in greater proportions to higher-ABV spirits. It, too, resulted from a vested interest. Marisol chef Jason Hammel had tried a few vermouths that impressed him, and he wanted to take a different, lower-octane approach to the drinks menu instead of focusing on what was trending.

“Vermouth complements the food, rather than sits with it, and offers the opportunity to have a conversation with the guest instead of them dictating to you how their meal is going to go,” Case says.

Marisol doesn’t emphasize customer education, though staff do suggest that curious diners try it first on its own, poured over a large ice cube. Then again, just as many will opt out, sticking to their typical beer or glass of wine.

“The hardest part is getting people out of their habits and into a place where they want to let the restaurant do its thing. It’s the difference between people who want to have an experience versus just have a meal and move on,” Case says.

Cuddy echoes this, adding that vermouth also battles the lingering perception that anything with residual sugar is “bad, cheap, or something your English grandmother drinks.” That’s why, although he seminally carries a stalwart California chardonnay by the glass, for instance, he’ll always urge the guest who orders it to sample something else.

“I believe in these small producers—whether they make vermouth or wine—and in creating a platform to compare and contrast with a stereotypical brand or product,” he says. “You’re in my house; you’re going to adventure with me. That’s the pact you make when you walk through the door.”