In South Florida, pizza and tapas concept Angelo Elia is rolling out a brunch menu with options like Strawberry French Toast and mimosas.

Why Restaurants are Betting on Boozy Brunch

There's no reason servers need to carry a pot of coffee—and not a pitcher—in their free hand.
June 2017 Jen Karetnick

Would you like a glass of Chardonnay with that?”

That’s not generally the phrase owners of breakfast-lunch eateries encourage the waitstaff to utter—that’s assuming their establishments even serve alcohol. But Robert Maynard, cofounder and CEO of Famous Toastery, wanted to shake up the image of servers running around with plates of scrambled eggs and bacon in one hand and a pot of black coffee in another. Maynard and best friend/business partner Brian Burchill founded the restaurant in 2005 in Huntersville, North Carolina. It began as an independent operation and has since grown into a franchise with 17 locations across the Southeast.

Although the chain has served wine, beer, and spirits since its early days, the addition of a signature pairing menu last summer boosted alcohol sales some 35 percent. Famous Toastery isn’t the only concept reaping the benefits of an expanding beverage program. Boozy beverages—beyond the garden variety Bloody Mary and mimosa—are popping up on breakfast/lunch menus across the country.

Menu creativity has been at the heart of Famous Toastery since its inception. Items such as peanut butter–and–banana–stuffed French toast and a tofu omelet with spinach, roasted red peppers, and artichokes quickly became house favorites. Drink innovation seemed the next logical step.

“We live in a ‘want more’ society. There’s an incredible appetite for stuff,” Maynard says. “Millennials in particular are always looking for the new and exciting.” Famous Toastery satisfies that craving for novelty through menus that pair foods with a selection of wines; it also includes descriptions for the different varietals. For instance, the Chardonnay, a Central Coast William Hill with flavors of apple, pear, and a touch of vanilla, is touted as a lovely combination with either the avocado omelet (stuffed with bacon, tomato, and Parmesan cheese) or the Cobb salad. On the darker side, Prophecy Pinot Noir—red fruit notes of bright strawberry and raspberry—complements the corned beef hash, topped with eggs, potatoes, and hollandaise sauce. Maynard says a beer could also work. 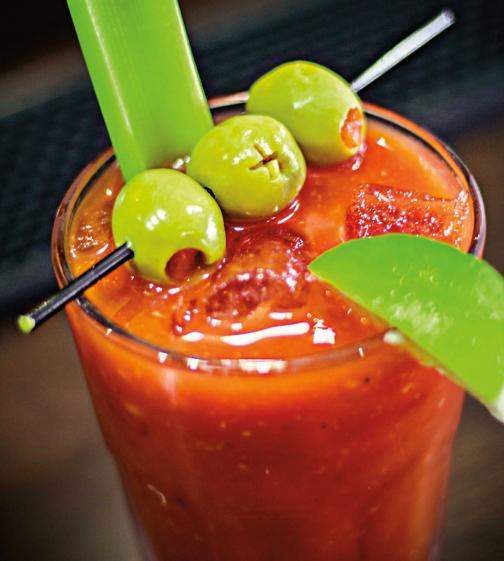 Famous Toastery still serves a mean Bloody Mary, but its alcoholic offerings have expanded to include a special pairing menu.

By providing menus that take the guesswork out of pairings, Maynard encourages his customers to experiment and build a relationship with the brand. “It winds up being a great talking point. [Being a restaurateur] is not just about making money and being successful. We’re in the communications business, and this is a great way to get people talking.”

At its core, an alcohol-abundant menu goes against the status quo. By expanding those offerings, brands are reinventing what it means to be a restaurant specializing in earlier dayparts. The Toasted Yolk Cafe, with three units in the Houston market, a fourth opening soon, and hopes to franchise across the Texas Triangle (greater Houston, San Antonio, and Dallas), is working to turn the standard formula on its head.

“Country themes have always dominated the breakfast space,” says CEO Chris Milton. “Breakfast dining isn’t what it used to be; now it’s a destination meal. We’re seeing that people want breakfast to be a social gathering where they can come in for mimosas or perhaps a glass of wine and make the entire meal an experience. We’ve embraced that desire and offer a modern alternative to the traditional roosters on the wall.”

To that end, The Toasted Yolk Cafe is overhauling its store design to reflect that shift. While the locations in operation do not have a full bar, the forthcoming restaurant and all future units will include a full alcohol menu, as well as a more contemporary design. Franchisees are now encouraged to think of the breakfast/lunch concept in the context of all dayparts, and its brunch-all-day program appeals to a variety of guests with differing profiles.

This perspective takes what Milton calls the “stigma of alcohol” out of the equation. And while he says most of Toasted Yolk’s beer and wine drinkers enjoy those beverages at lunch with the signature Reuben and the Alaskan Arnold (English muffin halves topped with spinach, salmon, poached eggs, and hollandaise sauce), the restaurant is working to refine the menu to include popular breakfast-specific drinks, such as high-end coffees with Bailey’s and Kahlua, or margaritas made with orange juice.

Indeed, consumers are more likely to imbibe if the meal is called brunch rather than breakfast, particularly in an unexpected ethnic category: Angelo Elia, chef-owner of the South Florida mini-chain Angelo Elia Pizza, Bar and Tapas, is slowly rolling out weekend morning meals, first at his Fort Lauderdale location and then at his Coral Springs location.

“Brunch is a relaxed meal where our guests like to take their time enjoying their day off or their vacation with a delicious meal among the company of friends and family. Incorporating the boozy component adds to the customer’s experience in a number of ways, including making the meal celebratory.” Given that he’s seeing turnout grow an estimated 8 to 10 percent, he’ll eventually introduce it at his two other locations.

What’s interesting to note at Elia Pizza, Bar and Tapas, however, is that the restaurants are already wine bars. For brunch to be an added attraction, Elia had to offer both traditional pull-in libations, such as the bottomless Bloody Mary and mimosa, as well as an additional cocktail menu. To that end, the restaurant offers the Bacardi Cucumber Mojito, White Sangria, and—what Elia says is a “guest favorite”—Angelo’s Signature Orange Crush (fresh-squeezed orange juice, orange vodka, triple sec, and a splash of Sprite), which pairs most popularly with the Lobster Grilled Cheese.

While some of these drinks scream South Florida, none shout “pizza.” But like Maynard’s example of eggs and beer, it doesn’t matter. What does make a difference, Elia says, are the fresh, creative ways to raise the bottom line and keep any meal fresh—even in the earliest of dayparts.xa