What are consumers looking for today?

The numbers show that buzz around craft beer (and beer in general) is decreasing, and it’s time for industry insiders to find ways to appeal to a new set of health- and sobriety-conscious customers.

Health and wellness trends, a variety of cleaner diets, and a collective move toward sober living has taken the spotlight away from these beverages, leaving craft brews in the lurch and in need of a refresh.

The recent data isn’t all doom and gloom for breweries and others with interests in craft beer. This summer, total U.S. beer sales in billions spiked 4 percentage points, with craft beer outperforming the category with a 5 percent increase. Plus, as a boon for breweries, interest in on-premises drinking options is expanding. Customers are talking about on-tap beers at least 25 percent more YoY, and discussions about draught beers are up by close to 50 percent YoY.

But there’s still room for worry in the beer segment of the beverage industry. 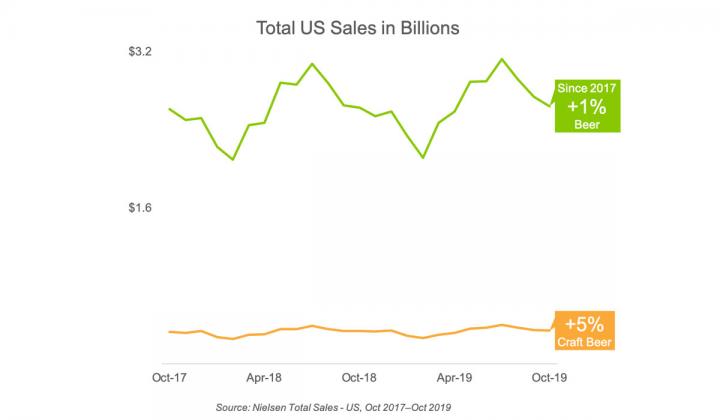 The state of craft beer today

According to the Social Standards report, there’s been a two-year down-trend in conversations about craft beer, beer, and alcoholic beverages as a whole. From October 2017 to October 2019, consumer conversations about alcoholic beverages as a whole dropped by 6 percentage points, and customer buzz around beer and craft beer decreased by 6 percent and 9 percent, respectively. 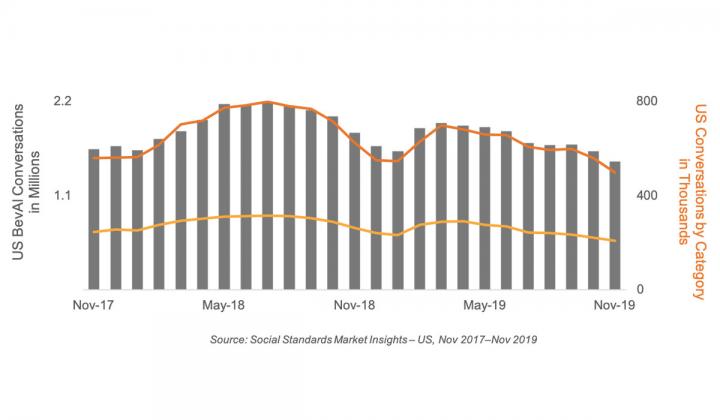 On the whole, the core consumers of craft beer skew white and older (unlike beer, which draws a pretty middle-of-the-road mix of drinkers). Craft brews are only in the 24th percentile for ages 21 to 24, meaning that 76 percent of other beverage-alcohol take precedence over craft beer in this group’s conversations. For those aged 55 to 64, though, craft beer shoots up to the 63rd percentile.

“This demographic makeup has held relatively steady since 2017, suggesting that craft beer has a stable fan base but hasn’t successfully converted new consumer segments,” the reports says. No new customer segments means a lack of youth interest, and, as millennial and Gen Z customers move into their prime years of buying power, this could be bad news for craft beer on the whole. 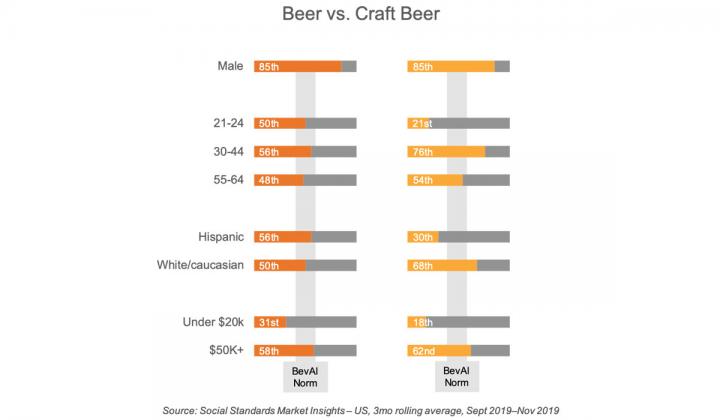 What’s holding these beverages back? A new, overarching emphasis on health and wellness in diet.

In the last two years, Social Standards reports that conversations about health and wellness topics are up 63 percent in relation to alcoholic beverage topics. Additionally, 5 percent of consumer conversations about alcoholic beverages mention topics related to health and wellness—for context, that’s the same amount of buzz that the entire IPA category generates. 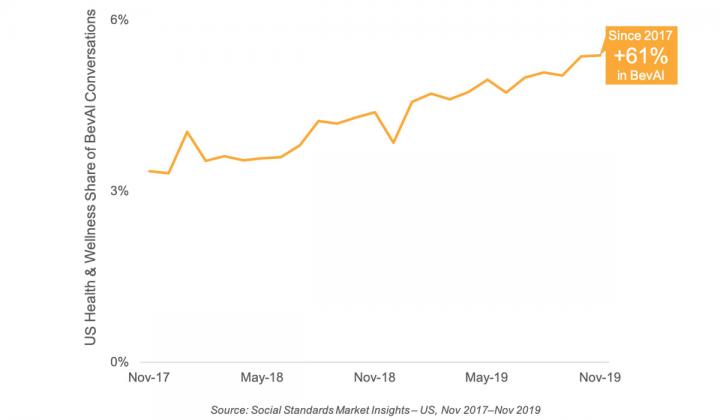 It doesn’t look like these growing craft beer conversational topics are passing fads. Consumer interest in these areas has been steadily increasing for two years, and, when measuring by repeat mentions month-over-month, consumers show themselves to be more loyal to low-carb brews (18 percent of mentions on average) than to lagers (15 percent of mentions on average during the same period). 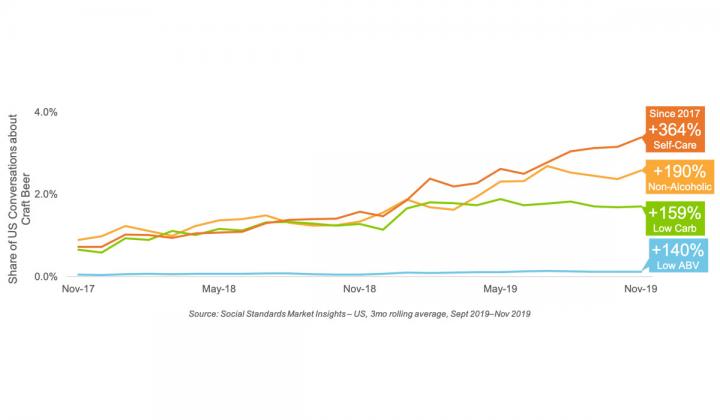 The good news is that consumers haven’t stopped drinking beer altogether. Rather, the expectations of a casual pint are shifting.

While lighter beers aren’t as closely associated with craft beer as darker, heavier varieties, consumer interest in these options is on the rise. And, while Social Standards reports that consumers strongly associate bold, flavorful brews like brown ales and porters with the craft beer sector, fruit- and vegetable-heavy beers seem to be on the rise, too. 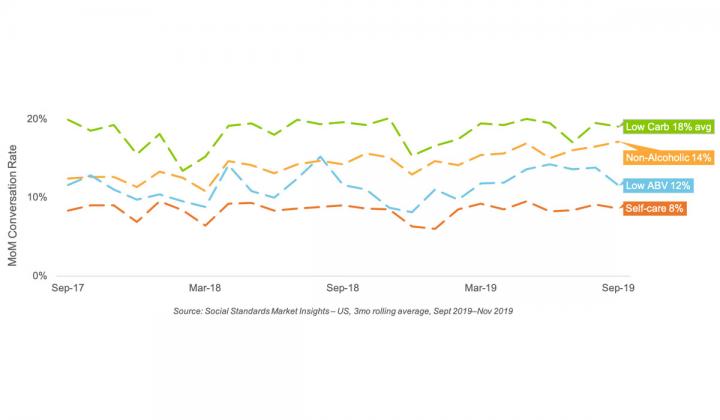 Fruity flavors have grabbed new interest, with tastes like grapefruit, guava, tangerine, and passionfruit all experiencing positive growth in conversations this year. Meanwhile, traditional ingredients like hops and barley have experienced a downward dip in conversations in 2019.

Taste-wise, beer-drinkers are moving towards floral and spicy notes—both qualities saw a more than 10 percent increase in conversations over this year—which are two flavor profiles that under-index with craft beers in consumer buzz. The qualities that customers are talking about in craft beer, specifically, include fruity, sour, hazy, and bitter brews, with juicy, malty, and dank flavors experiencing a drop in mentions YoY. 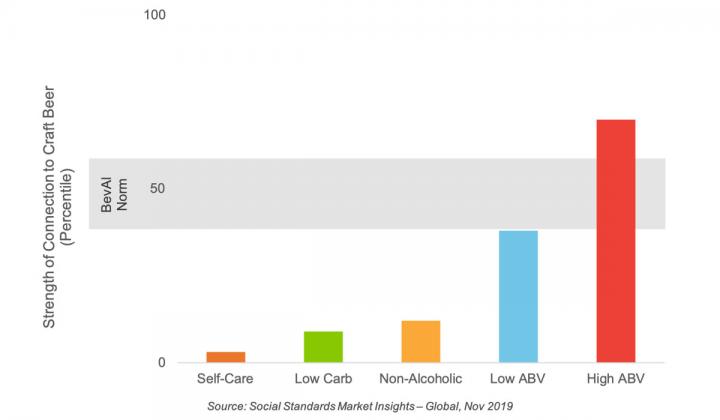 And the beer-drinking experience is still a major draw for craft brews; bottled beer experienced negative YoY growth in conversations, but consumers talked about on-tap and draught beer significantly more. These on-tap and draught options are closely related to craft beer in consumer’s heads, and, according to the report, outpaced the growth in consumer conversations about canned beers.

The interest in on-tap and draught options points to the continuing popularity of breweries and on-premises drinking. According to the Brewers Association, a U.S. trade group of more than 7,200 brewers, the American brewery count has been steadily increasing for the last 10 years. In 2016, the Brewer Association reports 2,102 brewpubs, 3,251 microbreweries, and 186 regional breweries in the U.S. By 2018, those numbers had jumped to 2,594 brewpubs, 4,522 microbreweries, and 230 regional breweries nationwide. 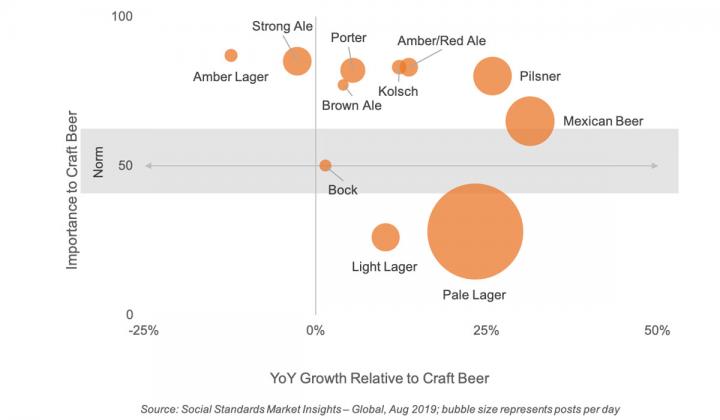 A look on the light side. 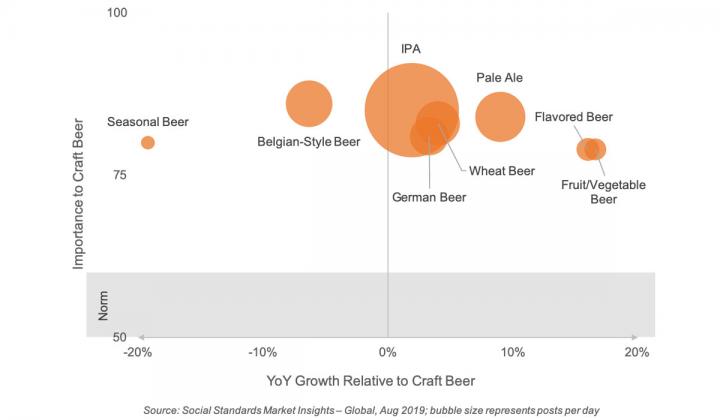 How can breweries and others in the beer industry turn that 16 percent drop in consumer craft beer conversations around in 2020? Social Standards suggests that the beer industry capitalize on consumers’ changing tastes, offering up fresh beer options that align with current trends.

“Consumer tastes are changing, which can be a threatening prospect. The good news? Every market shift is an opportunity for innovation,” the report says.

With various health and wellness trends top-of-mind for many craft beer consumers, new interest in low-carb, low-ABV, and non-alcoholic beers could be an opportunity for craft brewers. Adding these types of beverages to beer lists could capture a valuable section of health-minded customers.

Tapping into flavors that aren’t as closely associated with craft beer—such as light lagers, fruit-forward brews, and spicy and floral tastes—could also be lucrative for brewers. Social Standards’ report says these areas are “white space opportunities” for those in the craft brewing game who are looking to change up their product mix. 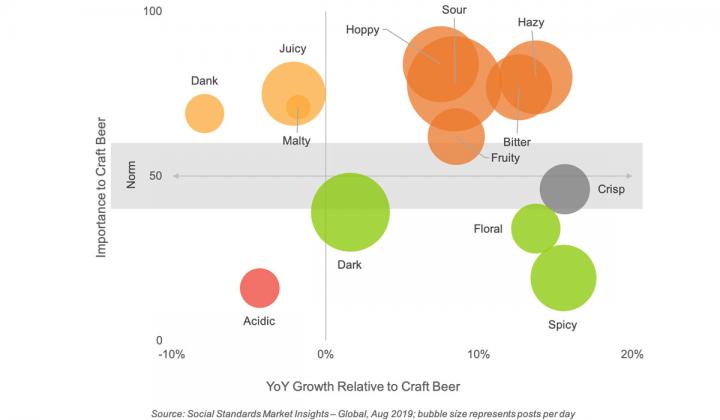 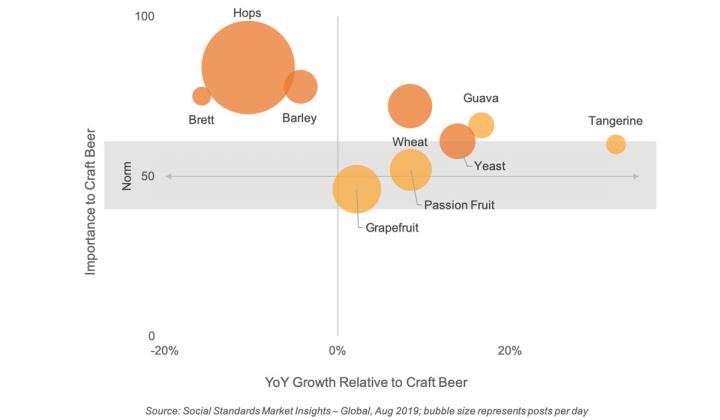 Finally, with the advent of social media influencers, the industry can use self-made digital “experts” to gain new customer traction. Choosing a set of powerful influencers who appeal to craft beer-loving audiences can bring added buzz to a new product or brewery space, as well as change the conversation around craft beer and related topics.

First, Social Standards recommends that brewers seek out influencers who not only have a large audience that participates in craft beer culture, but who also garner large amounts of engagement, or likes and comments, in addition to a healthy follower base. Next, brands and brewers should consider the target audience they’re looking to gain. Dialing in a target audience can narrow down the roster of influencers and help a brand select ones with the most valuable followings. 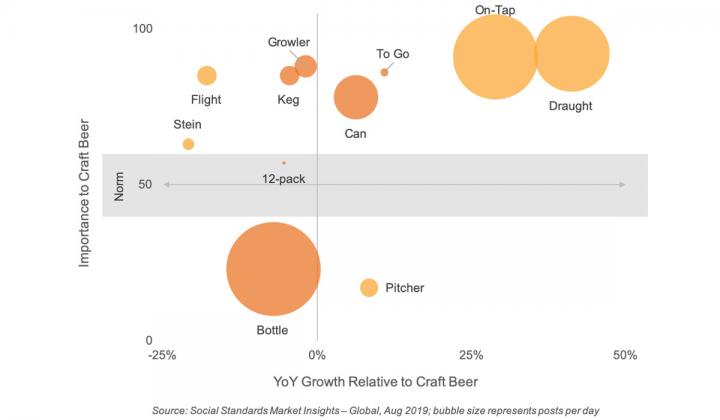 Does it matter where beer is consumed?

Overall, breweries and beer-makers will need to make menu, nutrition, and taste changes to their product first, updating them to appeal to younger audiences, before leveraging influencer platforms. With changes in the consumer conversations surrounding craft beer already underway, the industry is at a crossroads where update are proving necessary to draw in new loyal customers.