Offering a range of pours helps Upstairs 2 keep its wine list affordable and accessible to guests sampling its cuisine.

“What [arranging the menu by wine] really does is it highlights our focus, because, with most restaurants, you can certainly look at a menu and see the snacks, appetizers, entrees, and sides,” says Maiki Le, executive chef at the restaurant. “Everything is pretty easily broken down. When people approach that style of restaurant, you might not think every dish you’re ordering pairs with something different.”

Instead of getting a bottle for the table to go with all the dishes ordered, Upstairs 2 wants to encourage a tasting of multiple wines throughout the night. “I think the menu guides people to the notion that there could be a best pairing with every dish that you’re ordering,” Le says.

And with the restaurant’s range of pours, from a 2.5-ounce, half-glass pour to a 12-ounce, half-bottle pour on over 40 wines, the tasting of multiple bottles throughout the meal is attainable and affordable. “You could do four 2.5-ounce pours with a four-course meal, and you’re still walking out of here with under $100 spent,” Le says. “It gives people freedom to create a custom tasting.”

It’s true that the more you buy of a wine at Upstairs 2, the cheaper the ticket, says wine director and sommelier Marilyn Snee, but the difference is actually pretty minimal. Between buying two half-bottle carafes and a whole bottle for the table, a customer will only be paying about $3 to $5 more for the two-wine option. “People think that we’re crazy because our markups are so small,” Snee says. But convincing guests to explore wine is worth it for the wine-focused restaurant, especially considering it was built as an extension of the long-standing shop, The Wine House, located downstairs. 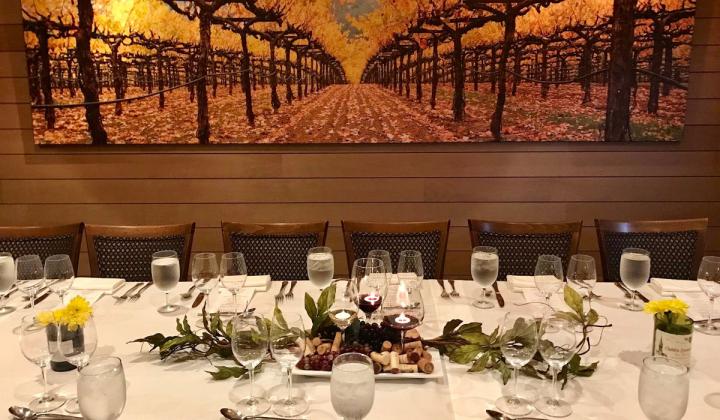 Winemaker dinners are a perfect time for Upstairs 2 to get precise with its wine pairings.

Although the menu itself is designed to place emphasis on wine first, the process of selecting wines to pair with Le’s food comes last. Le begins with seasonality, what’s growing locally and can be acquired sustainably. “We’ll create dishes around what’s peak season,” Le says. But, for Snee, buying wines for the season really isn’t as up-in-the-air as one might originally suppose.

“The same key ingredients pop up at the same time every year,” Le says. “Everyone knows when it’s heirloom tomato season. Everybody knows the best time to get peaches or plums. The ingredients manifest themselves in a very formulaic way. It’s a pattern. Every spring, you get those beautiful peas, sugar snaps, and white asparagus. Then it goes into the summer, and we know we’re going to get tomatoes, melons, peaches, and plums, and soft shell crabs from May to September.”

Snee knows Le’s food well-enough at this point in their working relationship to plan ahead. Her wine-buying process takes a multi-pronged approach. Some wines are acquired from downstairs at The Wine House, but most are acquired through other means like from distributors coming directly to the restaurant and Snee going out into the world and tasting.

Even though Snee knows seasonally the wines she’s tasting might not fit right now, they will fit down the road, and, when she finds something she knows would go perfectly with Le’s food—even if it isn’t available for six months—she’ll buy it up to have it in her back pocket for when the season comes. 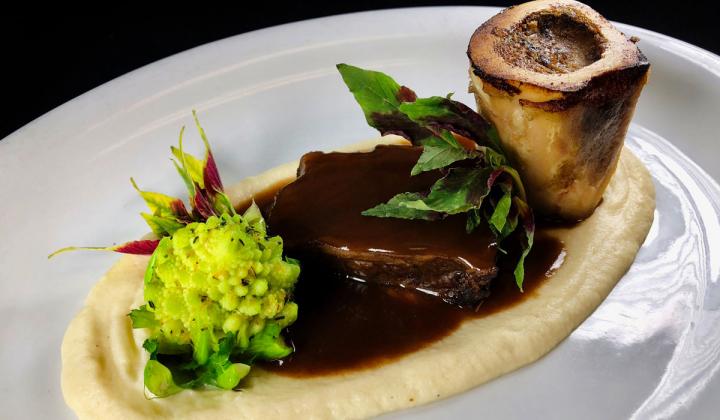 The culinary and beverage teams work together to create a balanced offering.

The art of pairing

“It’s a process that’s just very organic,” Snee says. Le and Snee meet weekly to discuss what’s coming up on the menu. Le will describe the dish and Snee will start brainstorming category.

“The likelihood of someone saying this is the only wine that goes with this dish is not realistic,” Le says. But the two aim for a balanced menu between the different wine categories.

“I’m not creating the menu because I know we need something in rosé; I’m creating it because I’m inspired by ingredients or saw or read something,” Le says. Then Snee helps her figure out where it goes on the menu. “From my standpoint, I have to augment it here and there to make sure it fits in the best category,” she says. “It’s a great learning experience and part of the reason why I wanted to work here, for the focus on wines and enhancing my own wine knowledge.”

The times when pairing gets very precise for the two of them is when they are hosting a winemaker dinner. “We know exactly which wines go with each course, and it’s definitely meant to highlight the food and the wine,” Le says.

But taste in general is very individualized, Lee and Snee recognize. “On the restaurant side, I feel like there are nuances in each individual preference,” Le says.

And, for Snee, she begins every pairing conversation with a customer asking what type of wines they like first. Her goal is to expand the customer’s palate to wines they might not expect.

“I hear all the time, ‘I don’t like Merlot,’” Snee says. “I’m not trying to fool anybody, but Merlot might be the best thing to go with that dish. So, I’ll bring three wines over that I know will go with the food, give the customer a taste of each, and, when they choose one, that’s when I’ll bring the bottle over.” Customers are usually shocked, saying they would never have thought of that combination, had never heard of that varietal before, or thought that they hated that kind of wine.

“It’s all about education,” Snee says. Many customers turn to the restaurant because of its affiliation with The Wine House and the fact that the restaurant itself has been there for 12 years as a source of wine knowledge.

In turn, Le and Snee work to educate their staff well to share the pairing notes. “Maiki educates our staff to what goes in the food, and I educate them on what goes in the wine, and then we sit together and taste them together,” Snee says. “That’s the most important thing. There’s always someone to guide the customers.”

People, Snee says, want to know why the pairings work. Having a wine director, chef, and waitstaff who can answer that question is key for the wine-focused model.