Liven up your menu with cocktail and food pairings.

Pairing Cocktails with Food: Everything You Need to Know

Liven up your menu with these beverage tips.
February 2018 Barney Wolf

Pairing food with alcohol has a long tradition, but it’s usually mentioned when combining wine with a meal. Increasingly, however, other hard beverages like spirits are being considered for matches. As mixologists become ever more innovative, the idea of putting together cocktails that go well with the chef’s creations is intoxicating.

“I look at it from a cook’s perspective,” says Josh Streetman, head barman at Motor Supply Co. Bistro in Columbia, South Carolina. “Pairing and finding matching ingredients is key to making a food and cocktail pairing.”

Similar to matching food with wine, you are looking for a comparison or a contrast when pairing with spirits. And, just as diners have become sophisticated in wine choices—it’s more than white wine with seafood and red wine with red meat—they seek more from their spirits or cocktails. “It’s a wonderful thing when the cocktail or spirit enhances the food and vice versa, but it is magical when they enhance each other,” says Brian Van Flandern, president of New York’s Creative Cocktail Consultants.

Some spirits work well with specific types of food: gin and seafood; tequila and mole; vodka and smoked fish; and whiskey and steak. The latter mixes “power with power,” says John Fischer, professor of hospitality and service management at the Culinary Institute of America in Hyde Park, New York, as the charred meat in a steak “can stand up” to a whiskey.

While she’s made no conscious effort to pair particular dishes with certain spirits, Blackhouse Hospitality Group beverage director Alexis Hansen says she designs a beverage program “to be in tune with the [food] menu, so there is a direction.” A knowledgeable staff helps give guests direction in cocktail choices, she adds.

The process of pairing spirits with food works well, too, when the mixologist and chef work together, as they do at St. Louis’ Mexican-influenced Nixta and its lounge, Bar Limón. “First, we are talking with the chef, spending considerable time in the kitchen going over the ingredients,” says bar manager Lucas Ramsey. “We go over the ingredient list and then figure out what we can use. So, if the dish has a certain type of chile, then we can make a simple syrup with that and meld it with the base spirit for flavor.” The idea, he explains, is to bring an element or two from the dish “and build a cocktail around it.” For instance, if a menu item has a strong citrus component and smoky flavor, a cocktail made from one of the bar’s 24 mezcal varieties could work as a pairing, such as in a margarita or in a cocktail featuring amaro and orange or lemon juice.

It’s not just pairing one dish with alcohol that’s important, says Leo Robitschek, bar director for New York City’s Eleven Madison Park and The NoMad restaurants. “You need to look at the progression of the meal” and how that all works together, he says. “For us, it’s a conversation with the guest about how adventurous you are.” The restaurant features pairings with wines, spirits, and beer for multicourse meals. An example features an apple cider doughnut dessert alongside a mulled apple cider using clarified milk punch, apple brandy, bourbon, spices, and Fuji apple juice.

Most of the cocktails at Black Twig Cider House in Durham, North Carolina, are, logically, cider-based. When designing the cocktail menu, co-owner Matthew Beason says he loves to use shims (low-alcohol cocktails) and suppressants (something like fruit juice that lowers the alcohol level). This gives him plenty of opportunities to match cocktails with strong or subtle food flavors.

Fried seafood is a favorite of Beason’s, particularly seafood sourced from eastern North Carolina. Pairing it with a cocktail that has lime citrus cues, like a margarita, is “a no-brainer,” he says. One favorite cocktail at Black Twig is the Sean Penn. It gets its moniker for the use of Blake’s Hard Cider Co.’s El Chavo cider, which evokes the drug lord El Chapo (whom Penn famously interviewed). The cocktail drops an ounce of El Chavo into blanco tequila, cointreau, and lime juice. “I recommend that with our Shrimp Hushpuppies,” Beason says. Some guests turn the combo into a meal, adding Asian apple cider slaw into the mix. “It all pairs wonderfully.” 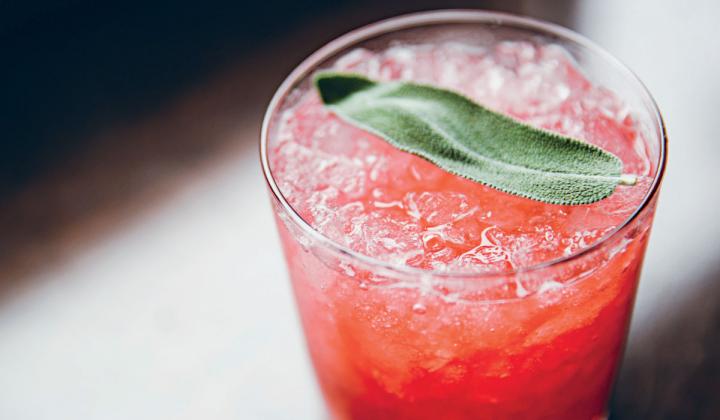 Unlike grape-based wine, potential cocktail ingredients are limitless. “With cocktails, it’s like having a blank canvas,” Eleven Madison Park’s Robitschek says. “To me, it’s a lot more exciting, but a lot more difficult, because you’re creating something from scratch.” But a good combination of food and spirits can do wonders. Pairings that bring out the flavors in a dish “can work magically,” Robitschek adds.

Easy on the Alcohol

A key factor in pairing spirits with food is the alcohol level, says Creative Cocktail Consultants’ Van Flandern. “Ethanol dulls the palate, and it is not conducive to pairing, especially if you want to extract delicate flavors of food.”

The Culinary Institute of America’s Fischer shares the sentiment. “The problem, at its essence, is spirits are so strong that they are stronger than most food flavors,” he says. The answer lies in lowering the level of alcohol with water, juices, or other ingredients.

“You are talking balance and power,” Fischer says. “It’s one reason cocktails work well with canapés, because the canapés themselves are so powerful.”