See how beverage experts across the U.S. are catering to millennials and high-earners with Instagram-ready presentations.
July 2018 Barney Wolf

To enhance the group dining experience, a growing number of establishments feature communal cocktails served in everything from punch bowls to coconut shells. “These large-format drinks bring with them the spirit of conviviality,” says Kyle Chamberlin, publications manager at market research firm Datassential, which recently included the trend in its Spring 2018 issue of TIPS.

Patrons find themselves sipping through many individual straws or ladling portions from large bowls. Operators also benefit from the drinks, as they appeal to trend-forward customers and “you can knock out the equivalent of several cocktails at the same time,” Chamberlin says.

Large-format cocktails aren’t new. Punch was popular in the early 17th century and is a term derived from the Sanskrit word for “five,” referring to its five main ingredients: alcohol, sugar, citrus, spices, and water, Chamberlin says. The drink, introduced to the West by officers and sailors of the British East India Company, soon adopted Jamaican rum as the chosen spirit.

Punch today often refers to any shared fruit-centric drink—alcoholic or not. The hard versions fell out of favor years ago but are making a comeback, especially with millennials and high earners, Datassential reports. As these Instagram-savvy guests flock to restaurants for unique experiences, bartenders are getting imaginative with presentations, harkening back to the old world of crystal and class, transporting customers to the tropics, or otherwise creating a “wow” effect.

The punches, which can cost up to $72 for eight portions, come in an array of vintage bowls with fancy ladles and mismatched glasses. There are typically four options available, and most ingredients are constant from city to city. “It can be tricky if you change too much,” Williams says. A particular favorite of the Punch Bowl Social crowd is The Watermelon Polo Bowl, which features tequila, watermelon-spearmint tea, watermelon shrub, house-made strawberry syrup, and fresh lime juice.

Similarly, San Francisco’s Kaya, a Jamaican restaurant, brings out the 30-ounce crystal bowls for its punch servings. The Rum Punch, which runs $50 for four servings, “came straight from the Jamaican chef,” says Aaron Paul, beverage director for the eatery’s parent company, Alta Group. The punch uses rum and strawberry syrup from the island paired with lime, pineapple, orange, and coconut. “It evokes the spirit of anything you’ve had in Jamaica,” Paul says. 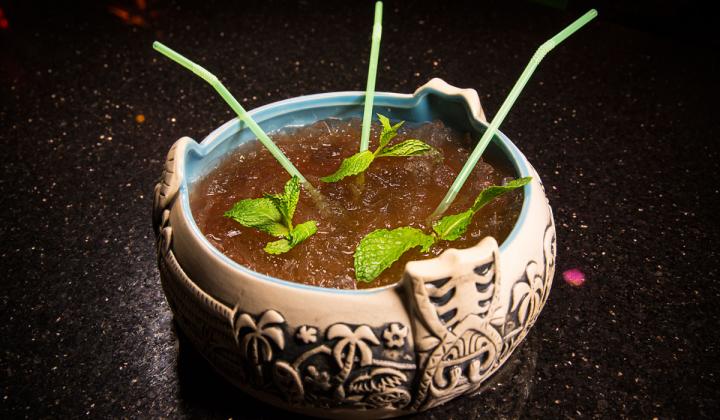 Some cocktails at The Golden Tiki—whether they be individual or large-format—trigger light and sound shows within the restaurant or arrive with flames or smoke from dry ice.

Found in the shapes of swans, disco balls, or copper cups, punches at The Dorsey cocktail lounge in Las Vegas’ The Venetian hotel come in three flavors, priced at $90 for four to six servings. “They give guests the opportunity to try something new while having a shared experience,” says Juyoung Kang, lead bartender. And their unique presentations can also provide the “wow” and celebratory factors, especially if guests get the seasonal “royale” option, meaning it contains Champagne.

The most popular punch at The Dorsey, however, is Green Street, “probably because it has vodka,” Kang says. The other ingredients are lime, cucumber, green apple, mint, and club soda.

Provision No. 14 in Washington, D.C., inventively uses French presses for its five large-format cocktails, which sell for $44 serving four to five people. These communal cocktails create a fun, interactive experience for its upscale clientele.

“What’s nice about it is we use fresh garnishes inside, so not only does it look wonderful but, when you plunge on the handle, it pushes all the flavor [elements] out,” says Ralph Nader, general manager at Provision No. 14. “The more you leave the garnishes in, the more they steep.”

Drinks and a show

Polynesian restaurants and tiki lounges are known for their showy cocktails, making large-format cocktails a natural fit for these concepts.

Individual cocktails can be turned into large-formats—called kuuipo—or a bowl at The Golden Tiki in Las Vegas. Two bowl-specific cocktails arriving in carved vessels with straws are the Scorpion Bowl, $35, which is a combination of rum, gin, vodka, and fruit juices, and the Zombie Punch Bowl, $45, with three rums, spices, and juices.

Some cocktails at The Golden Tiki—whether they be individual or large-format—trigger light and sound shows within the restaurant or arrive with flames or smoke from dry ice. “It’s part of the escapism,” says Branden Powers, managing partner. “The more drinks we can set on fire, the better.”

The team at Kaya agrees with Powers’ sentiment. The Zap Pow, $64, similar to a Hurricane with blended rum, blood orange, passion fruit, grenadine, and jerk bitters, is also set aflame. For that “wow” effect, a half of a blood orange is placed at the center of the bowl, sprinkled with rum, cinnamon, and allspice and lit on fire. What says “party” better than with a bowl of flaming booze?

Darden Will Pay Employees to Get Vaccinated
Restaurant Industry Cut 372,000 Jobs in December
Restaurant Workers in D.C. to Receive Vaccine in February