How Stone Brewing Stormed its Way Into All 50 states

The California-based brewery may have risen to recognition for its explosively hoppy India pale ales, but it has always embraced variety, leading to international growth over the past 21 years and the spot as the ninth largest craft brewer in the U.S. In September, Stone reached distribution in all 50 states with the addition of West Virginia, but CEO Dominic Engels says the company has no reason to stop growing.

“We feel that an inherent thirst for variety has always been part of our approach and is becoming even more relevant now,” Engels says. “I see craft continuing to grow; you want to see people stretch their arms and be able to touch a craft beer and I’m not sure that’s the case, so there’s some work to do there and I don’t think we’ve gotten everybody yet.”

Engels says Stone believes there’s a lot of opportunity in continuing to educate consumers about beer, and he thinks that the craft beer in the U.S. can double its 13 percent market share of total U.S. volume. For Stone, and for other craft breweries like it, reaching this goal can come from ubiquitous channel growth across independent and chain bars and restaurants, and on-premise and off-premise beer sales. And it can even come down to how the beer is packaged, as canned craft beer sales continue to outpace bottle growth, which Engels says can attract new consumers while presenting new beer drinking occasions from music festivals to farmers’ markets.

Even though Stone may have outgrown its “local” connotation in many markets that value that distinction in beer, Engels says the brand has reached a credibility standpoint with consumers to transcend that marker. To reach that point, the brewery, which now has locations in Richmond, Virginia, and Berlin, Germany in addition to its home market of Southern California, has always focused on freshness even as its volume and distribution grows. 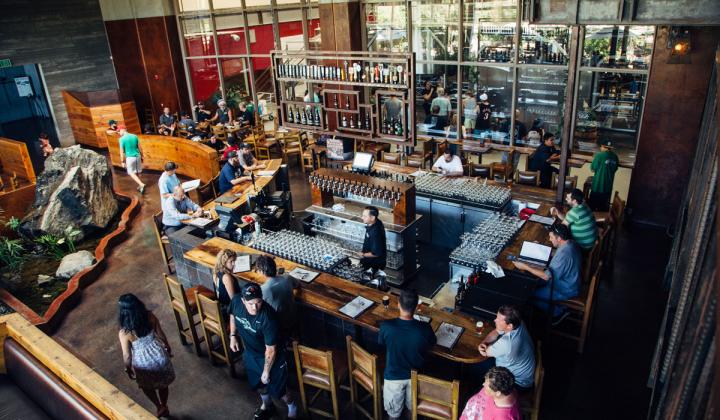 Stone is all about freshness. It stamps a produced-on date for its bottles and cans.

“We do a laundry list of things to make sure fresh beer gets to market everywhere,” Engels says. “I’m not sure how much the consumer always sees it, but I do see a strong thematic shift potentially coming where local will be mitigated by the idea of freshness. We’ve seen that for a long time and we continue to see that conversation be balanced between those two factors.”

Stone stamps a produced-on date for its bottles and cans, and its “Enjoy By” IPA series includes the date by which customers should consume the beer.

“Every consumer can see what Stone’s doing from a freshness basis,” Engels says. “I do think a brand like Enjoy By goes a long way to explaining that, but we have a lot more work to do.”

Aside from its lineup of six core, year-round offerings, Stone rotates its seasonal offerings with two beers per season, three times per year, alongside special releases. Along with its pale ales and IPAs, Engels says the brand gets a following for its stouts like the popular Xocoveza, an imperial stout inspired by Mexican hot chocolate brewed with cocoa, coffee, pasilla peppers, vanilla, cinnamon, and nutmeg.

“There are other breweries that have a fairly significant concentration in one beer within their portfolio, and Stone is taking a different approach,” Engels says. “We’re victims of our own curiosity, and we like to make different beers.”