How Philly Brewer Dave Goldman is Building a Craft Empire

Landmark Americana’s Dave Goldman went from brewing at home to running his own craft brewery and restaurant.
February 2018 Mary Avant

When Dave Goldman finds something he’s passionate about, his first instinct is to run with it. Take his career in the foodservice industry. After starting out at a high-end grocery store at the ripe age of 11, Goldman went on to work in pizza shops, major in hotel and restaurant management at the University of Delaware, and become a partner at Italian Bistro, a concept with a smattering of locations across the Philadelphia area—all before graduating from college.

After leaving college, he helped open the very first Landmark Americana restaurant in 2003 in Glassboro, New Jersey, founding what would become the Landmark Americana restaurant group. “I love that concept. It’s a lot of fun,” he says of Landmark, a sports bar brand known for its college-campus presence, late-night crowd, and lineup of nearly 40 beers on tap. “It’s exactly the kind of place I like to hang out at, and we had a lot of success there.”

Over the next decade, Landmark opened three additional units, as well as a restaurant and wine bar called Terra Nova, a liquor and high-end packaged goods store known as Wine Works, and—as of last June—Urban Village Brewing Company. It’s this most recent concept that serves as yet another example of Goldman’s tendency to follow his passions wherever they may lead him.

In 2011, Goldman’s then-girlfriend (now-wife) gifted him with a home-brew kit, and he wasted no time in coming up with his own book of beer recipes. Within a year, Goldman knew the craft beer business was where he wanted to be.

“I’m very familiar with making food in restaurants, and I was going to breweries all the time and drinking beer all the time,” Goldman says. “At some point, I got to where I had a really good book of recipes, and I preferred what I was making over what I was purchasing at the store or at bars. So I thought, ‘If I have something good to offer, I can run with this.’”

Enter Urban Village, a brewpub located in Philadelphia’s up-and-coming Northern Liberties neighborhood. Fashioned after the breweries-slash-restaurants that pepper California’s West Coast—including big names like Russian River and Lagunitas—Goldman set out to create a concept in which beer was not just a focal point, but also the perfect complement to a menu of high-quality, chef-driven dishes.

“I love the restaurant side of things as much as I love the beer side of things, so in my mind, I wasn’t necessarily that excited to do a production brewery,” he says. “But I really wanted to do a brewpub, where we could make small-batch stuff, make something different all the time, be experimental and have fun with it, and not be tied down to selling an enormous volume of one or two products.”

Goldman spent a year at the University of Sciences in Philadelphia, learning the ins and outs of making beer, as well as interning at nearby Double Nickel Brewing Company. In 2016, armed with a certificate in brewing science, he got Urban Village off the ground with a rotating lineup of his most tried-and-tested brews. 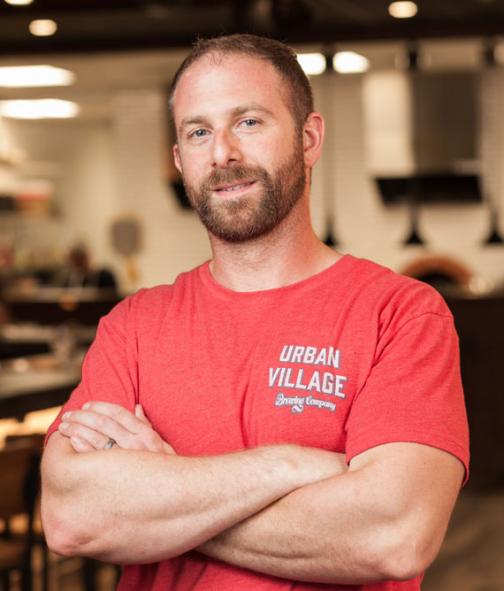 Each beer is brewed on site at the 2nd Street location, with one-third of Urban Village’s production being distributed in cask form to retailers in the local market. “It’s been great developing relationships with some really cool accounts that have brought our beer on,” Goldman says. “Everyone’s been really receptive to it, and we’ve had no trouble selling it.”

So far, the concept is also having no trouble with selling its house-made pizzas, which use a naturally leavened dough with a three-day proof time. Similar to a sourdough pizza dough, Goldman says Urban Village is one of, if not the only, concepts in Philadelphia to create its pizza in this fashion.

The remainder of Chef Chris Davis’s menu is filled with other items that pair well with craft beer, from brick oven–roasted mussels to hand-cut fries, sandwiches, and a duo of smoked chicken wings.

While Goldman spends most of his days brewing beer at Urban Village, he does manage to devote some time to continue developing the Landmark brand. This includes getting the next location off the ground in Ewing, New Jersey, where it will open late next summer near the College of New Jersey campus. 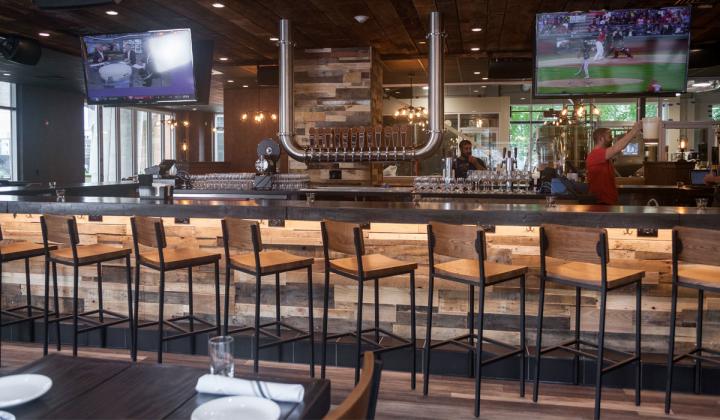 Urban Village is fashioned after the breweries-slash-restaurants that pepper California’s West Coast.

Meanwhile, the company is also heavily focused on Wine Works in Marlton, New Jersey, an asset that helps round out the restaurant group’s portfolio. The liquor store features wine, beer, and other spirits—with a sampling machine that allows customers to try up to 20 wines before they buy—as well as a cheese counter and an array of cigars.

“Having a liquor store is almost like having a grocery store. Everyone’s going to eat and everyone’s going to drink in good times or bad—maybe more in bad times,” Goldman says. “But going out to restaurants can somewhat be a luxury purchase, so having the packaged goods side of it certainly helps us hedge our bets that there’s always going to be a consumer.”

While expansion on all fronts is on the mind of the Landmark Americana group, Goldman says opening up a second Urban Village location—one that would be geared more specifically toward distribution—is something he would consider, under one condition.

“I don’t want this to be a large-scale thing,” he says. “I like the process of making beer, and I don’t ever want it to get to the point where I’m not making beer.”