For a delicious finish to an italian meal, it doesn’t get much better than biscotti dunked in a glass of Vin Santo.

Dessert Wine: Why Your Guests Will Love it, and Why You Should, Too

“It’s the wine everyone loves, but they don’t know they love it yet,” says Keri Levens, wine director at Chefs Club in New York. Such is the challenge and the opportunity dessert wines present.

The key to getting customers to order more dessert wine, says sommelier Jorge Tinoco of The Restaurant at Wente Vineyards in Livermore, California, is “training, training, training… both servers and bartenders sell more when they have the knowledge and education to help customers make a selection.”

Bartenura Moscato
For a refreshing, slightly sweet and fizzy wine, look no further than Bartenura’s Moscato, made from Muscat grapes grown in the Asti appellation in Italy. “[It] is delicious both by itself, with sweet desserts including fresh fruit, or as a base to various cocktails,” says Gabe Geller, the Royal Wine Corp.’s wine blogger and director of public relations and client services. Enjoy this crisp, fruity wine after dinner, or during dinner with spicy Asian fare or deep-fried Chinese.
Asti
Italy

Schwartz shares Tinoco’s sentiment. “If the sommeliers, servers, and staff understand dessert wine, these wines will sell. There definitely is an opportunity to boost dessert wine sales through by-the-glass, half-glass, or bottle [options],” he says. And it doesn’t hurt to grab customers’ eyes with a catchy headline on the wine list like “Sticky and Sweet,” as Frasca does, or to promote dessert wines by pairing them on tasting and holiday menus, as Frasca and Chefs Club do.

“With some menus, we have printed dessert wine pairings under each dish—that at least plants the seed in the guest’s mind that they should try a dessert wine,” Levens says. “Pouring guests a little complimentary taste is also a great way to gently educate and give them an opportunity to get to know the wines.”

Chef, bartender, and corporate sommelier for iPic Entertainment, Adam Seger, who boasts an extensive collection of Madeira wine at The Tuck Room in New York, says the same. “People don’t really order [dessert wine,] but once they try it, they like it,” he says. Seger delights in regaling guests with the history of Madeira and tying it into the location of The Tuck Room in the historic Seaport District. “If you lived in New York in the 18th or 19th centuries, you either drank ale or Madeira,” he says, explaining that Madeira withstood the tumultuous ocean voyages to the New World. It was the wine used to celebrate George Washington’s inauguration and the signing of the Declaration of Independence and the Louisiana Purchase.

When pairing dessert wines with food, it helps to have some guidelines, advises Levens.

“With dessert, I always use the rule that the wine must be as sweet as or sweeter than the dessert,” Levens says. “Port and Madeira are both great with chocolate and great on their own, as well, in the place of dessert.” But the most popular dessert wine at Chefs Club is definitely Moscato. “When I have a Moscato [on the menu], it moves the most,” Levens says. “I think people feel familiar with it, it’s usually gently sparkling and gently sweet and not too expensive.”

Schwartz starts with tried and true food and wine matches. “Some classic dessert wine pairings include Sauternes and foie gras, Port and blue cheese, Banyuls and chocolate, Moscato d’Asti and fruit-based desserts/tarts,” Schwartz says. At Frasca, he recommends a 2011 Villa Spinosa Recioto della Valpolicella Classico with the restaurant’s Baba Napoletano, which is a dessert made with brioche cake, coffee, chocolate, and cherry. “Or something super simple like 2009 Badia a Coltibuono Vin Santo del Chianti Classico with a single biscotti,” he says.

Incorporating dessert wines into cocktails can help boost their popularity with customers, too. On his cocktail list, Seger has incorporated Madeira into two cocktails: Govna’, which also includes rum, spiced New York ginger apple liqueur, and pimento bitters, and The Esquire, which is Malmsey Madeira on hand-cut ice with wood-fired evaporated maple and fresh nutmeg.

Perry’s Steakhouse and Grille in Chicago, where Susi Zivanovic serves as corporate sommelier and beverage director, used Valentine’s Day as a hook to promote dessert wines. The restaurant concocted cocktails like the PassionNut for Port featuring Fonseca Bin No. 27 Port with Don Q coconut rum, passion fruit puree, and lemon juice and encouraged customers to order one of the restaurant’s 18 dessert wines instead of actual dessert. “There is more complexity in fortified and dessert wines than table wines because of the elaborate winemaking techniques used,” says Zivanovic. “This lends unique characteristics that pair perfectly alongside rich flavors, such as desserts, or can be enjoyed alone as a dessert.” 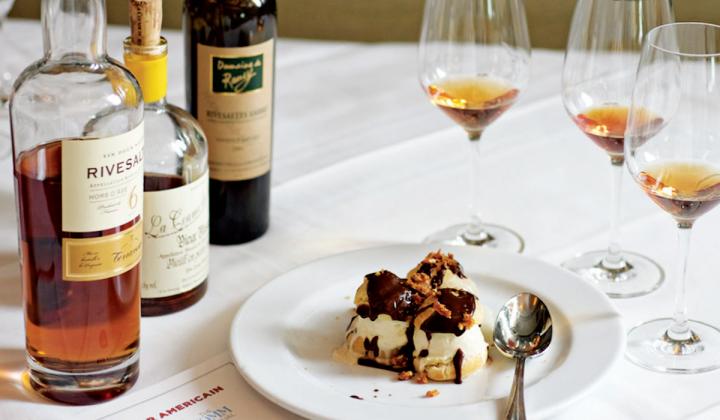 How the sweet stuff is made.

Fortified wines Fortified wines are made by adding a distilled spirit like brandy and typically have a higher alcohol content, usually around 17 to 20 percent.
BIG THREE: Port, Sherry, Madeira
OTHERS: Marsala, Muscat, Vermouth, Banyuls

Late harvest/noble rot wines Grapes are kept on the vines as long as possible to concentrate the sugars; for noble rot wines specifically, grapes are attacked by a fungus called botrytis, which dehydrates the grapes and further concentrates the flavor.
BIG THREE: Sauterne, Riesling, Tokaji