The cuisine is American in thought and French in technique, with a foundation of classical sauces, bases, and cooking preparations.

Renowned for its tasty late-night dining (the restaurant is open until 1 a.m. on Fridays and Saturdays), its chef won James Beard Best Chef: Midwest in 2011 and was a semifinalist for James Beard: Outstanding Chef in 2014.

The building that houses the restaurant was built in 1881 as a brick-and-timber warehouse, the restaurant grows its own produce in a garden on the roof, and the Nordic-influenced menu is updated weekly.

Elegant and sophisticated, this French-Mediterranean restaurant is one of the Twin Cities' most renowned eateries, with three tasting menus that radiate complexity and care. Chef McKee won James Beard Best Chef: Midwest in 2009.

Chef Jim Christiansen's exploratory menu—a maze of colors, flavors, and imaginative small plates—includes proteins such as duck breast and spiced lamb. This is the newcomer that may be less well known, but other chefs say to check out. 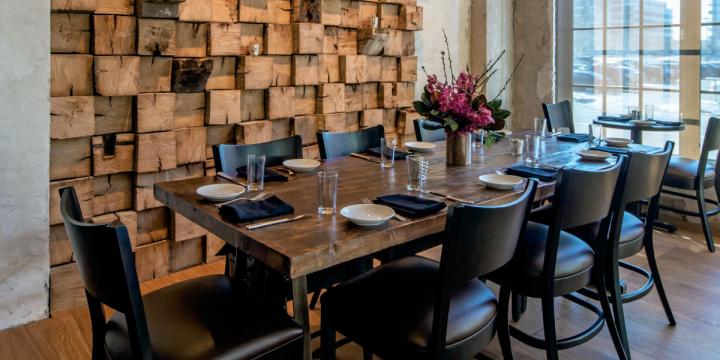 Playful and artistic define both the food and ambiance at this dynamic duo, which opened at the onset of the fast-growing North Loop neighborhood's revival. The upscale Borough features an open kitchen with a bright, airy dining experience while the complementary Parlour, where guests often start and end their evening, is a low-lit, cozy setting that's all about the cocktail, albeit with upscale bar snacks.

Chef Lucia Watson opened Lucia's as one of the first true farm-to-table restaurants with a menu that changes weekly and a focus on seasonal, local foods; she was the owner/operator for 30 years until selling the restaurant to Jason Jenny in December.

The same family has owned and operated this landmark Italian restaurant since 1928, and—testament to the fact that its hospitality knows virtually no bounds—guests are welcomed with complimentary valet parking and shuttle service is provided to area sports and entertainment events.

Attracting newbies and Asian food lovers alike with its homemade noodles, Slurping Turtle epitomizes the best of the noodle shops of Japan and, on a personal level, of Chef Yagihashi's childhood experiences. Before opening Slurping Turtle, he won James Beard Best Chef: Midwest in 2003.

Selected as Business Insider's Best Restaurant in Michigan in 2015, Grove highlights New American cuisine with a focus on local and seasonal ingredients.

In this beer-focused European café—the bier menu has 50 pages, including three exclusives direct from the Lowlands Brewing Company in Ertvelde, Belgium—Chef Justin Fuhrman celebrates the culture and food of Belgium, Luxembourg, and the Netherlands, with signature favorites like pannenkoeken, a thick Belgian crepe.

A finalist for James Beard Best Chef: Midwest this year, Chef Justin Carlisle puts a creative spin on Ardent operations. In the intimate 23-seat space, chefs serve, servers cook, and on weekend nights after two seatings of an upscale prix fixe menu, the restaurant converts to a Ramen shop, which serves 120 diners in 90 minutes.