How Restaurants Can Win Happy Hour in a Modern Age

Legislation around alcohol discounts remains a moving target, but that doesn’t stop restaurants from pursuing the potentially lucrative daypart.

For many consumers, no two words sound sweeter than happy hour at the end of a long, demoralizing workday. Our beloved ritual of kicking back over a few rounds of cheap drinks and bites offers bars and restaurants a great chance to lure in business during down times, carving out a special subcategory of regulars and creating an upbeat, bustling atmosphere for incoming dinner-goers.

Happy hour is also big business. According to 2018 Check-Level Insights Pool data from global analyst Nielsen, U.S. bars and eateries generate 60.5 percent of their average weekly sales from happy hour—a time frame that accounts for just 15 hours of the total business week. The average happy hour check in the U.S. is $68.99 (after discounts), including food and drinks, which is $8 more than the average check during other dayparts.

More surprisingly, Nielsen CGA data shows that Wednesday happy hour traffic is an average of 23.9 percent higher than other weekdays—suggesting Hump Day is something of a happy hour sleeper.

“Happy hour is really important,” says Mark Steuer, chef/owner of Funkenhausen, a German-Southern beer hall in Chicago. “We’re at a point where we have a lot of regulars for happy hour and are filling up the bar every night. It’s not necessarily driving new business, but it’s filling a need period.” 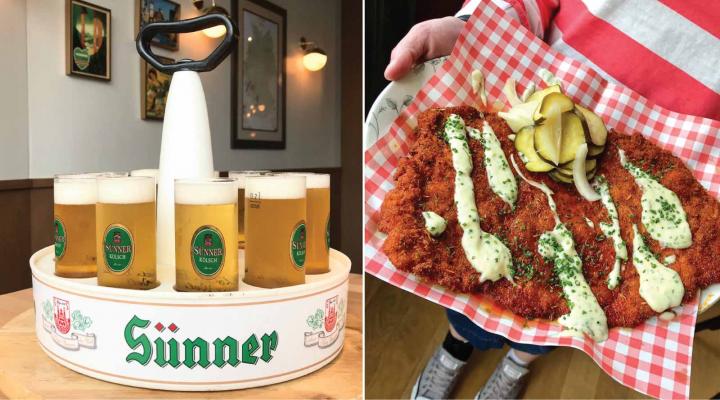 The nearly year-and-a-half-old eatery has become especially known for its rotating Kölsch service Monday through Thursday from 5 to 7 p.m. Servers come by bearing trays full of 7-ounce pours of the ice-cold, German-style lagered ale for $3 per glass, which they continually rotate out until asked to stop.

“With happy hour, it needs to be fun, and it needs to be a deal,” Steuer says. “The Kölsch trays especially are something no one else does; it’s interactive and good for groups.”

Knowing the importance of playing the value angle, the beer hall also offers discounted boots of beer and its garlicky giant pretzel ($6 instead of $8). Specialty food items like Nashville-hot schnitzel and smoked chicken wings are only available during happy hour and brunch. The latter makes use of a byproduct of a favorite smoked chicken entrée; the smoked drumsticks are deep-fried and tossed in homemade fermented hot sauce, for $3 each.

The limits of alcohol discounts

Illinois is technically a newcomer to happy hour drink deals, having only overturned the statewide law banning discounted drinks during special times of day in July 2015. Because alcohol-related fatalities number among the leading causes of death in the U.S.—whether from drunk driving, intoxicated violence, or accidental deaths, many states unsurprisingly have laws on the books that attempt to curb consumers’ ability to drink a lot, really fast, for really cheap. Numerous states restrict deals like unlimited or two-for-one drinks, while eight maintain outright bans on discounting alcohol during happy hour (see sidebar).

Businesses have long found clever workarounds to such restrictions while still operating within the letter of the law, from eliminating cover charges to offering discounts on food instead of drinks. Even before Illinois lifted its happy hour ban, for instance, it was perfectly legal for bars and restaurants to temporarily lower the price of alcohol; they just had to discount prices for the entire day.

In 1984, Massachusetts became the first state to ban happy hour specials on alcohol. A year before, the owners of then-newcomer Harvard Square restaurant and bar, Grendel’s Den, had emerged victorious in a drawn-out legal battle challenging a Massachusetts state law allowing churches to veto liquor licenses, which reached the U.S. Supreme Court. The historic legal precedent changed similar laws in nine states and allowed Sue and Herbert Kuelzer to open Grendel’s Bar downstairs in 1983. But they were never allowed to offer $1 happy hour drafts or two-for-one drink deals to bargain-seeking graduate students and locals.

So the pub began plying customers with a free buffet of French bread pizza and pigs in blankets between 5 and 7:30 p.m. to go with their full-price microbrews. When the bar and restaurant merged in 2000, the legendary free buffet was replaced by a daily happy hour special from 5 to 7:30 p.m., during which the entire food menu is half price with $4 minimum beverage purchase.

Because Grendel’s Den offers the same menu all day, there’s no real need for service downtime; happy hour can roll right into dinner service without resetting the kitchen.

“Driving business early in the evening makes a difference on so many levels,” says second-generation owner/operator Kari Kuelzer. “People like to walk into a lively restaurant, especially for the type of service we do, as a casual establishment with casual food. It looks inviting. Plus, it’s a great way for our drinking clientele to get some food in their stomachs.” 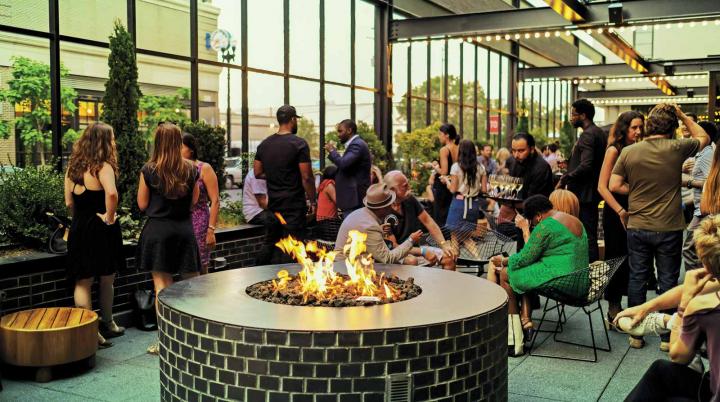 From Kuelzer’s point of view, the happy hour ban has never hurt business. On the contrary, she would prefer to never to discount the bar’s main source of revenue.

“To be honest, our occupancy costs are so high that getting into a price war with the place across the street to be able to sell our main source of revenue for $1 would not pay off for anyone,” she says. “It’s not like we have a lot of places with lines out the door. It’s hard to sell enough $1 drafts to make rent when, by law, we’re not permitted to serve an intoxicated person.” Indeed, Massachusetts along with several other states has a so-called dramshop law wherein bartenders who serve visibly intoxicated patrons can face civil charges.

Because Grendel’s Den never had an incentive to carry mass-produced domestic drafts, it instead focused on building its selection of curated craft and imported beer. That program has in turn become a draw for customers and, Kuelzer argues, helped spur the craft beer boom in the region.

“A lot of craft beer companies got started in Massachusetts in the ’80s, and [craft brews] were extremely attractive to places pouring mass-produced, cheaper wholesale products,” she says. “Rather than serving Bud for $2 all day long, we could sell a slightly more elevated product at full price, which meant more money for us.”

One of the original craft beer brands, Sam Adams Beer Co., came calling at Grendel’s Den right around that time. “Basically the happy hour ban happened, and we in Massachusetts were the first part of that craft beer wave. I think the movement would’ve been a lot slower or less significant in the market without it,” Kuelzer says.

Not all the laws are workable for everyone, however. Chef Geoff Tracy took on a Prohibition-era rule when he filed a lawsuit in 2018 against the Virginia Alcohol Beverage Control Board (abc) challenging the state’s right to bar him from touting happy hour prices and running catchy slogans like Wine Wednesdays.

Tracy is a prominent local figure with eight restaurants across Maryland, Virginia, and Washington, D.C. The original restrictions, which dated back to 1934, banned any happy hour advertising outside an establishment’s four walls. In 2014, the Restaurant Association of Metropolitan Washington helped loosen some of the rules, such as allowing pubs to promote their drink specials online.

“But it was still very restrictive in terms of words you were allowed to use,” Tracy remembers. “The whole part associated with the First Amendment really irked me. Commercial speech is still protected by the First Amendment; all we were trying to do was share true information.”

Tracy took to posting cheeky tweets from his @chefgeoffs account, like “According to ABC law, I’m not allowed to tell you that happy hour goes from 3 to 7 p.m., or that we have the following specials …,” he says. Anastasia Boden, an attorney from public interest law firm Pacific Legal Foundation, took notice and offered to represent Tracy pro bono in the federal lawsuit filed against Virginia’s ABC. Two identical bills breezed through the state house and senate before governor Ralph Northam signed them into law last summer.

Happy hour is undoubtedly a big part of Tracy’s business model of casual, everyday eateries. In Maryland, where there weren’t such limitations, his restaurant Lia’s bills itself as the best happy hour in Chevy Chase. Still, he concedes that winning this long-fought battle likely isn’t going to make a huge impact on business.

“It was just such a ridiculous law that shouldn’t have been there. I’m almost fighting a battle over the ridiculous as opposed to seeking some massive benefit towards me as a business owner,” he says.

From a PR standpoint, however, it was a pretty genius move that lined up with Tracy’s outspoken persona. “When small-business owners stand up for values and freedoms, it resonates with people,” he says. “You have to be authentic to who you are as a brand. It definitely gives me a little bit of uniqueness.”

For now, his days of battling outdated laws are over, though there remains the somewhat arbitrary rule that bans restaurants from exceeding 45 percent in alcohol sales. “I get where they’re coming from, preventing restaurants from becoming bars,” he says. “I’ve never been close to that issue, so I’ll let someone else pursue it, but that probably should be resolved at some point.”

In the meantime, Wine Wednesday is loud, proud, and in full swing at D.C.’s Chef Geoff’s.