In their respective geographic areas, these are the brands that are widely recognized and that recorded 2014 sales worthy of a Top 10 ranking.

To identify the Top 10 regional chains, FSR started with brands that had at least 10 locations at the end of 2014, were located in a concentrated geographic area or region, and had systemwide sales that approached $100 million—and in three instances, topped the $200 million mark. Among these regional chains are some undeniable heavy hitters, a rejuvenated veteran brand, and a handful of rising stars.

Down one unit and still Ninety Nine Restaurant & Pub managed to increase its revenues 2.9 percent in 2014, as the brand remains steadfast in serving its all-American fare with a nod to New England flavors and cuisine. It has strongly established itself in its New England home turf, and three suburban towns—including its home base of Woburn, Massachusetts—boast two to three locations, which is unusual for a full-service chain in a small market. Under the American Blue Ribbon Holdings umbrella that includes O’Charley’s, Max & Erma’s, Village Inn, and Bakers Square, the Ninety-Nine offers a sizable gluten-free menu and, in May, tweeted that it was creating new vegetarian dishes and sought customer feedback.

Saltgrass Steak House originally opened in Houston in March 1991, and has gradually expanded into its current 52-unit operation. Up two units and touting a 7.2 percent systemwide sales increase in 2014, Saltgrass specializes in prime cuts of char-grilled beef. Also on the menu are seafood, poultry, ribs, burgers, sandwiches, and salads. While a little more than half of its restaurants are located in Houston or Dallas, the brand has made small inroads into neighboring states and Nevada. A new Waco location is expected to open by late summer.

Legal Sea Foods experienced a 5.4 percent increase in year-over-year sales and opened two units in 2014. Its ubiquitous presence in the Boston area and a reputation for serving the freshest fish held strong, but the company’s only remaining New York location, which was in Huntington Station, Long Island, shut down in December, 10 months after a carbon monoxide leak killed the manager and made 27 others ill. Despite the tragic circumstances in New York, Legal Sea Foods debuted three neighborhood concepts in Massachusetts: Legal Crossing in Boston, Legal Oysteria in Charlestown, and Legal on the Mystic in Somerville. The continued expansion showcases the company’s desire to offer more casual, yet still colorful, dining experiences. The company has successfully tried other variations in the past with the multicultural Legal Test Kitchen, the casual Legal C Bar, and Legal Harborside—a three-floor, three-concept location in Boston.

Although its unit count dropped by two last year and sales only inched up 1.4 percent, Bertucci’s maintained a hold in the marketplace. The company debuted a new concept called Bertucci’s Kitchen in Nashua, New Hampshire, in June. This remodeled Bertucci’s unit now allows for a more open cooking space enabling customers to see their pizzas being made, tossed, and placed into the brick oven. The company plans to roll out more Kitchen concepts this year, but this is not the first time the chain has experimented with something new. Bertucci’s opened the 2ovens offshoot in Shrewsbury, Massachusetts, back in 2012, and this concept serves only dishes made in the restaurant’s wood- and gas-fired ovens—non-pizza items included. Bertucci’s understands the importance of fresh ideas in an ever-crowding marketplace.

Twenty years after it opened a single restaurant in Mount Shasta in the very north end of California, Black Bear Diner has become a dominant brand in the western U.S. The company operated 67 units by the end of last year, up from 48 just three years ago. And Black Bear Diner has big plans for the future as well, projecting 78 units by the end of 2015 and 100 by 2018.

Doug Branigan, vice president of franchising for Black Bear Diner, views the chain as a hybrid. “We look at it as an upscale family-dining environment with a diner twist,” Branigan explains. “The restaurant is bear-themed, with a log cabin-inspired ambiance and home-cooked, home-style meals. … We want that friendly, small-town hospitality.”

Black Bear Diner hopes to expand east, either with company-owned stores or with the right franchise partner. Eight of the 11 locations opening in 2015 are franchises, three are company-owned, and all will be located in the western U.S.

J. Alexander’s, the upscale, contemporary American restaurant known for premium steaks, seafood, and a menu that fluctuates by season and location, has a parent corporation with seemingly deep pockets: Mortgage behemoth Fidelity National Financial acquired the chain in 2012 from original founders Volunteer Capital Corporation. The company had planned on a $75 million initial public offering to reduce debt and generate capital, but it changed plans earlier this year, instead opting to spin out the chain to shareholders in lieu of going public. The J. Alexander’s Holdings also operates the 10-unit Stoney River Steakhouse and Grill chain.

Sometimes a period of downsizing is a good thing in the regional chain business. Now, Black Angus Steakhouse has turned the corner on recovery. After a difficult history when the chain, which had 103 units in 2001, went into bankruptcy protection in 2009 and closed numerous poor-performing units, last year marked several significant successes. In 2014, the chain’s 50th anniversary incidentally, Black Angus Steakhouse ended with 45 units and sales up 4.1 percent over the year prior. According to the company’s CEO Chris Ames, the newly added Brentwood, California, location, which opened last year, was the No. 4 performing unit in the portfolio, “tracking north of $5 million in sales.” A new location in Escondido is scheduled to open in October. “Sales are extremely good,” Ames adds. He projects the company’s 2015 sales will reach $155 million. “We still have tremendous opportunity to build out existing markets,” he says, including additional units in California, as well as Texas and Colorado, which could play equally well for the brand.

With 31 locations in 14 states, Granite City has spread its name across the Midwest without a lot of clustering; only four states have three to five locations. Known for its craft beers, signature martinis, steaks, salads, seafood, pasta, and burgers, the chain boosted sales by 3.9 percent last year. In February, Granite City hired investment bank Houlihan Lokey Capital to aid in “exploring a possible strategic transaction,” according to a company announcement—a move that suggests the brand might be seeking an influx of capital to assist in expansion efforts. Granite City has opened four new units over the last four years and plans to open four more in 2015. The company also purchased five Cadillac Ranch restaurants, including one in the Mall of America. 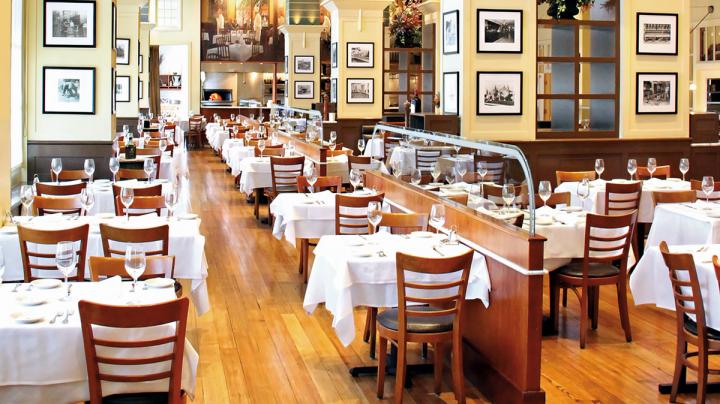 Locations: denver, seattle, las vegas, california, and one in virginia

Fifteen of Il Fornaio’s 19 high-end Italian restaurants are located in California, where the brand recently announced another opening. Executive chef Maurizio Mazzon oversees the menus and kitchens for all locations, using only the freshest ingredients and traditional cooking techniques from international cultures. Il Fornaio promises “the most authentic Italian experience outside Italy,” and one of its most distinguishing characteristics is the Festa Regionale, an exploration of food and wine from different regions of Italy that changes each month.

Things are moving at a brisk pace for The Greene Turtle. Systemwide sales rose 7.3 percent in 2014 and the chain opened three locations; the company plans to open seven to nine locations this year, of which seven will be franchise or partnership openings. The chain is known for its signature crab cakes—its top food-selling item—and an expansive list of craft beers, which are from local and regional breweries. “The food-to-alcohol ratio is 65 percent food sales and 35 percent alcoholic beverage,” says Robert J. Barry Jr., president and CEO. “Of that beverage mix, beer represents 70 percent, spirits 25 percent, and wine 5 percent.” The Greene Turtle brand is also a hit with a growing fan base: The company sells 250,000 branded T-shirts each year, as well as other branded merchandise including hats, glasses, and koozies.

The Message is Clear: On The Border is Back
Red Lobster to Name One Lucky Fan its First Chief Biscuit Officer
Jon Taffer Inks Agreement to Open Taffer's Tavern in Washington, D.C.