Small but mighty, that’s the defining characteristic of micro-chains that boast multi-million-dollar portfolios.

What, pray tell, is a micro-chain? Fair question, with a fairly obvious answer: A micro-chain has fewer units than most chains. For the FSR ranking of Top 10 High-Performing Micros, we focused on chains with five to nine units in the U.S. as of the end of 2014—and of course, with some pretty amazing sales being generated. This list displays the diversity of choices that has become increasingly popular in the burgeoning full-service restaurant space—from the classic Italian cuisine of Carmine’s and Il Mulino, to the eclectic Southern fare of Tupelo Honey Café, and the classic American seafood and steak at Redstone American Grill. Even further from the traditional business model, two of the brands combine dining and entertainment concepts: Pinstripes with its bowling and bocce, Hakkasan in Vegas with a nightclub. A sense of identity carries throughout the list—and to some extent at each location, as some chains alter their menu depending upon region, while others alter the look depending upon location. Ultimately, the overarching strategy is that each company builds the brand around its audience—the key to restaurant success regardless of whether a chain has five, 50, or 500 units.

Celebrating its 25th anniversary in 2015, Carmine’s continues to prosper. With six successful locations already—including its two-year-old, 28,000-square-foot Vegas landmark, which boasts 750 seats, nine private dining rooms, and lays claim to being the biggest non-club restaurant on the Strip—the Italian micro-chain is looking into potential locations in Orlando and Toronto. They seek out the right regions for their units and only open one per market, with New York City being an exception with its two locations. The brand’s formula for success is impressing customers with large spaces and huge, family-style portions. The company has released two cookbooks, including last year’s Carmine’s Celebrates, and its flagship Times Square location consistently attracts the theater crowd, which is how people throughout the country know the name.

The lavish STK is on the rise: The company added one unit in 2014 and year-over-year sales rose 14 percent. The glamorous, high-end steakhouse concept, which mainly focuses on evening dining, has begun moving into Europe with the recently opened STK Milan. Stateside, the STK Chicago and STK Orlando in Disney Springs are expected to open this summer and in the fourth quarter, respectively. Further, the forthcoming launch of STK Rebel in both Miami and Denver hails a new chapter for STK. The Rebel concept will serve both lunch and dinner, and chief executive Jonathan Segal says, “This concept reflects an expansion of our STK brand that will provide a more accessibly priced option for guests across the country, while offering the same innovative culinary features, energy, and vibe-dining experience that has driven the success of STK.”

With sales up 6.6 percent in 2014 and a new location expected to open this summer in Burlington, Massachusetts, the polished-casual Redstone American Grill is maintaining healthy growth. Known for its wide variety of grilled fare, seafood and steaks dominate. “We probably sell as much seafood as anything on our menu,” says chief operations officer Mike O’Leary. “It’s very comfortable eating, and we have a lot of creative people putting together our menu and our specials every week.” Each unit personalizes its menu by running different specials based on what the sous and executive chefs make in each region. And, some of the best ideas come from unexpected sources: O’Leary says an 18-year-old hostess in the Oakbrook Terrace, Illinois, location came up with the popular house salsa. The company plans to open units in Bridgewater, New Jersey, and Gaithersburg, Virginia, in 2016.

Combining bowling, bocce, food, and live music, Pinstripes excels at its special form of “enterdinement,” and—given that the designs of each 40,000-
square-foot unit are tailored to the location—the company prefers to call itself a collection rather than a chain. “We’re certainly best in class. It’s not just the unique combination [of dining and entertainment], our food is 100 percent scratch kitchen, very high quality,” says Dale Schwartz, founder and CEO of Pinstripes. “Everything about what we do is sophisticated fun.” The brand’s seventh location opened in downtown Chicago in February, and the company plans to open 10 to 12 new locations over the next three years in cities including Bethesda, Maryland; Cleveland, Ohio; Dallas; Hackensack, New Jersey; and Nashville, Tennessee. The goal is to grow to 50–100 locations in the U.S. over the next several years.

After opening in 1978, the upscale-casual Jerry’s Famous Deli swelled to 10 locations by the mid-2000s, but last year the famed deli contracted from nine to eight units. The South Beach location shuttered after 14 years, and the year prior the Los Angeles location had closed after operating 17 years. Despite these closings and an accompanying 9.1 percent decline in systemwide sales, the chain overall continues to tally impressive numbers. While some reports have suggested rising rents may have been a factor in the recent closings, as well as shifting demographics, the remaining units are still performing well. Fundamentally, the chain knows its business model, and the brand remains relevant with classic deli fare served in a sit-down venue that is more polished than a typical deli setting. However, conventional wisdom suggests a new location strategy is in order to keep Jerry’s Famous Deli healthy.

Since purchasing the original Il Mulino in New York’s Greenwich Village in 2001, business partners Jerry Katzoff and Brian Galligan have expanded the Italian concept, which specializes in cuisine from the Abruzzo region, into eight locations. Sales crept up 1.5 percent in 2014, and the partners are hoping to open two more locations this year. In addition to the high-performing sales, the brand’s celebrity status is strong: Presidents Obama and Clinton have both dined there in recent years. The company also sells its own gourmet sauces, oils, vinegars, pastas, coffees, and apparel through its website, and has opened additional restaurant concepts—the steakhouse concept Il Mulino Prime in SoHo, and four “casual chic” Trattoria Il Mulino spots in New York City, Atlantic City, Orlando, and Nashville, Tennessee.

With sales up 3.1 percent in 2014, the vibrant Mexican micro-chain boasts more than 100 tequilas and has much to toast. The Dos Caminos formula of traditional Mexican fare, fresh guacamole, plentiful drinks, and a festive atmosphere that tends to grow louder as the night progresses has endeared it to loyal clientele in three states. In March, the chain’s New York City locations debuted a seven-item Healthy Mexican menu, which includes many vegetarian and gluten-free items and was developed by Dos Caminos corporate chef Ivy Stark and Kristy Del Coro, the senior culinary nutritionist for SPE Certified. There is no word yet on expansion plans, but attempts in Las Vegas in 2008 and 2013 were ultimately unsuccessful, although the first unit operated there for nearly four years. 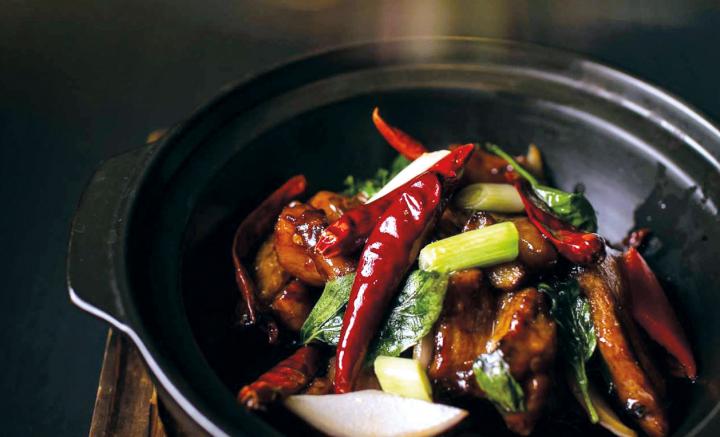 The Michelin Star–rated Cantonese restaurant certainly raised eyebrows with its 80,000-square-foot, $100 million Las Vegas mega-nightclub, which opened in April 2013. It wasranked No. 2 on The Nightclub and Bar Media Group’s list of top-grossing nightclubs in the U.S. in 2014. Overall, business is strong for upscale Hakkasan, which began life modestly as a restaurant in Hanway Place in London in 2001. The flagship location in Vegas has certainly drawn plenty of famous DJs to entertain the masses, including Calvin Harris, Tiësto, and Steve Aoki. Hakkasan chief executive Neil Moffitt told the UK paper Telegraph in December that 15 new openings are scheduled for the Hakkasan group, including the possibility of clubs in New York City and London. Moffitt expects that Hakkasan revenues could rise to $1 billion within two years of those openings.

After Tupelo Honey Cafe opened its first unit in downtown Nashville, Tennessee, in 2000, it experienced slow and steady growth that is now accelerating into a vigorous expansion strategy. Locations that have or will open this year include Arlington, Virginia; Franklin, Tennessee; Myrtle Beach, South Carolina; and Virginia Beach. “We’re basically opening a store a quarter at this point and plan to do so for the next four or five years,” says Stephen D. Frabitore, CEO for Tupelo Honey Hospitality Corp. “Right now, we’re searching in Arizona, Colorado, Kansas, and Texas. Every store that we open has been successful and well-received. It’s difficult for our guests to categorize us, which is perfect. We’re not the typical fried chicken, collard greens Southern.” The look of Tupelo Honey Cafe varies from location to location, which run the gamut from a new skyscraper in downtown Greenville, South Carolina, to a 100-year-old train depot in Johnson City, Tennessee.

Quality Calfornia-contemporary cuisine is the mantra for every dish on the menu at Paul Martin’s American Grill, where made-fromscratch is the norm and the only beef served meets the highest standards for being humanely raised and having “never-ever” received antibiotics or growth hormones. Seasonal and fresh rule, and that’s simply because, as company president Anthony Smith explains, “Seasonal makes the food taste better.” The beverage menu is equally elevated, with craft beers also changing seasonally, signature cocktails that rotate with the calendar as well, and a wine list that boasts 100 bottles. Of those, 75 wines are offered by the glass, and prices range from $8 to $25 per glass. The average check of $30 seems modest for such a polished dining experience. This summer the brand entered Texas with a Dallas location, and an Austin unit is planned for 2016. In November, an eighth California location will open in Pasadena.